The last two trading days were marked by events on the front of the British exit process from the European Union. The Brexit deal is prepared and agreed by the parties. What awaits us next?

However, after the public publication of the text of the treaty on the withdrawal of Britain from the EU, Prime Minister Theresa May met with fierce resistance both in her team and in parliament.

There is an active impression that in this form the deal will not receive approval in parliament and will be rejected. What other scenarios of development of the situation remain in this case?

A good infographic from the BBC will help us figure this out. 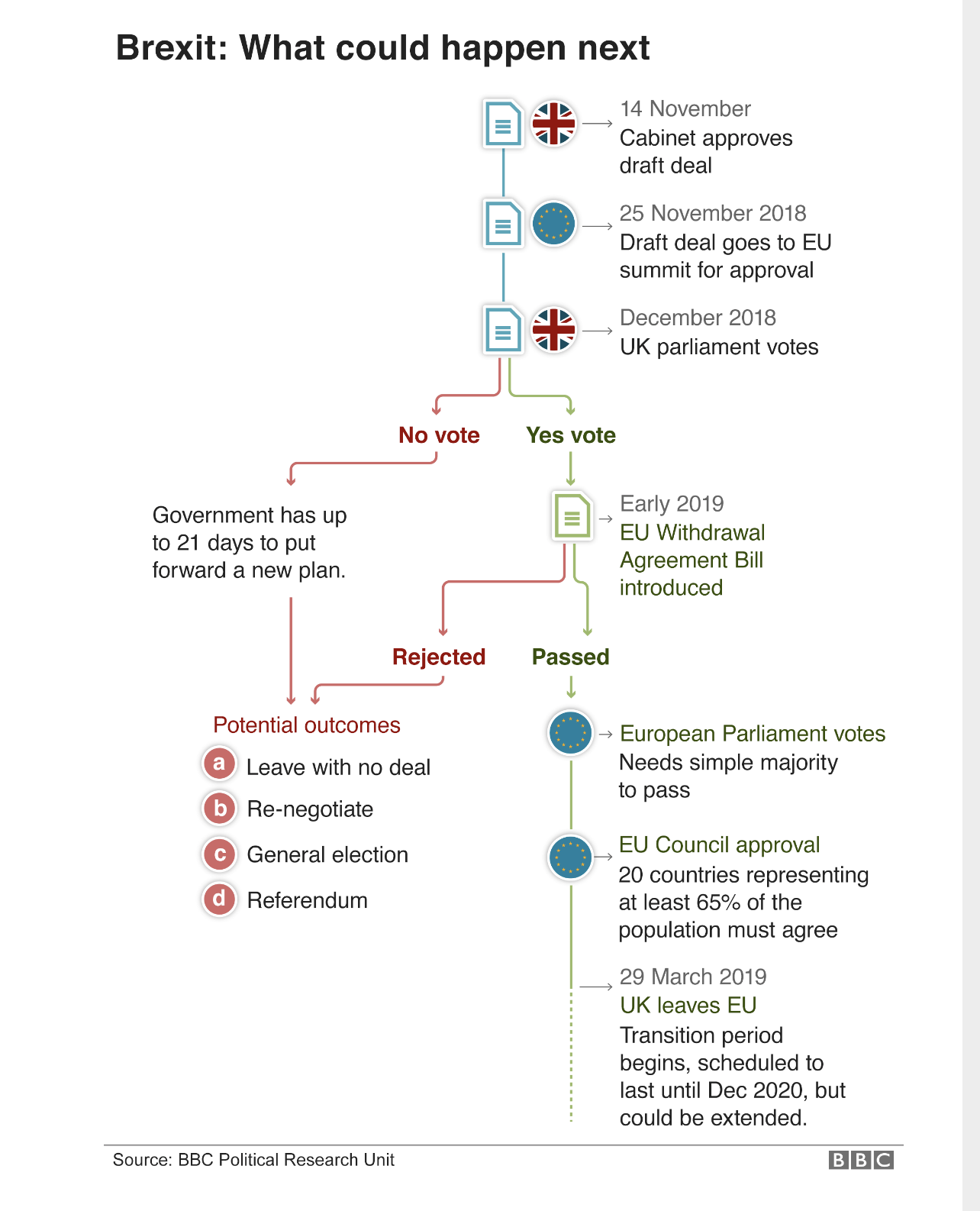 On November 25, 2018, at a special summit of the EU, the deal will most likely be approved, after which in December it will go to the British Parliament. And judging by the first discussion of the deal in Parliament, there is practically no chance of approval.

As a result, we have 4 possible scenarios:
1. Exit without a deal (no deal);
2. New negotiations;
3. Elections;
4. New referendum.

Continuation of negotiations or new negotiations are extremely unlikely. European leaders have already begun to talk about this.

Elections do not lead to a solution to the problem of a deal. Two main options remain – exit without a deal and a new referendum.

No deal is the worst option. First of all, by the fact that it leads to a high degree of uncertainty in relations between the parties. The old rules and regulations will cease to exist, and new ones will not appear for a long time. This will deal a huge blow primarily to the business of both parties. European officials will be very angry with the UK and are unlikely to make concessions in future negotiations. The British pound is waiting for a serious decline. Financial markets will be a wave of risk aversion.

A new referendum could lead to a decision to stay in the EU. Sociological polls show that at the moment this is the most likely voting scenario. But the current Tori government does not want to allow a new referendum. And only new elections can help change the vector of British politics.

As a result, we understand that the Brexit theme will for a long time remain a serious risk for world financial markets. Forex trading in the British pound will continue to be very sensitive to political news.

Leave comments. Ask questions. Subscribe to the newsletter on the main page of the FXTAA.com and you will be the first to learn about the release of new materials on our site.
Be sensible, put stops and trade in a plus.
(Visited 99 times, 1 visits today)

1 thought on “Brexit deal under attack – what awaits us next?”