Bull and bear traps occur in the forex market quite often. Their appearance can be a strong signal to close the current position and open a reverse position. Each trader needs to understand these situations and know how to use them in their trading. Very often situations of bullish / bear traps are confused with false breakdowns. Or false breakdowns are called traps. This is not entirely correct, although there are false breaks in the traps. 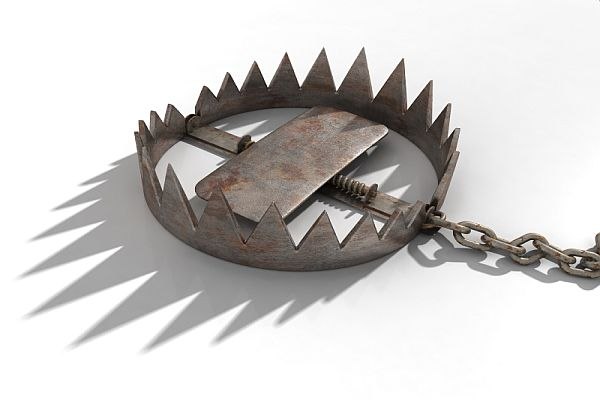 The logic of the traps is that traders in the forex market open their positions in accordance with properly formed price signals within the framework of the trend price movement. 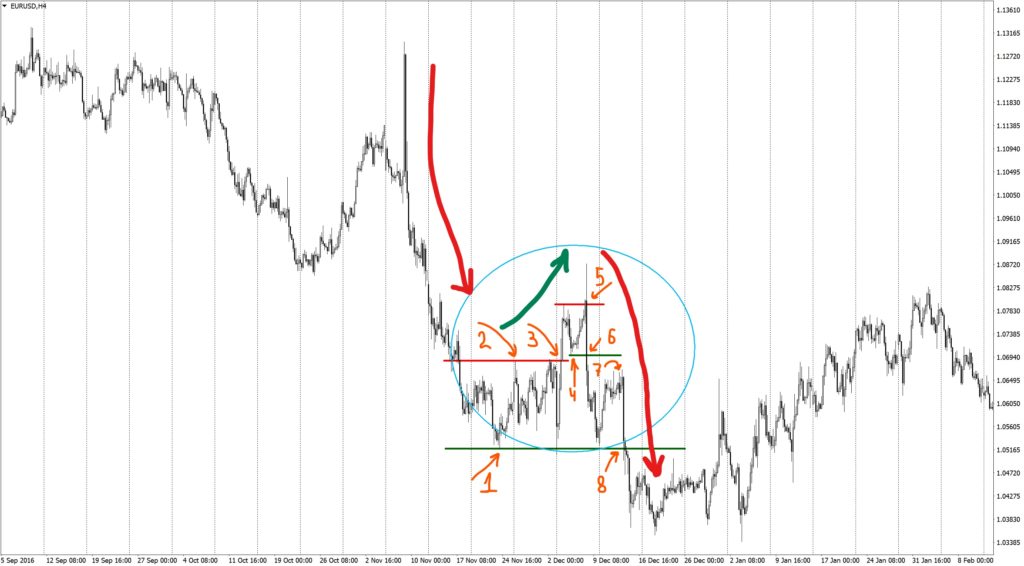 EURUSD was in a downtrend. At point 1, support was formed and in point 2 – resistance. Bulls at point 3 break through the resistance and remove the stops of the bears. A change in the situation is confirmed by a retest of resistance at point 4. If at point 4 the price went below resistance 2, then this would be a false breakdown. However, in our case, resistance becomes support, bulls gain control over the situation and open Buy positions. At point 5 there is a breakdown of another resistance, here traders are buying, working on breakdown of the level with pending orders.

If you close the sheet of paper with the right part of the graph from point 4, we will see the situation of a pure trend change to an upward trend. That is why such situations are called traps. However, a powerful impulse bears lower the price down. Price breaks support at point 6 and goes to support 1. Bulls on the pair are instantly trapped. If there were no stops at point 3, buyers are at a loss and are waiting for any moment to close their positions with minimal losses. This opportunity is provided to them at point 7. Closure of bull positions strengthens the downward momentum and the price goes below support 1, punching it at point 8. Reduce the time interval to M15, to learn more about the example.

We see how at point 3 after a breakdown, traders buy on a rollback to the level. The same at point 4. Bulls are bought on a rollback and added to positions that are open at point 3. At point 5, the situation is still bullish. But already at point 6, the stops of the bulls became the prey of the bears and intensify the impulse downward. Point 7 is the ideal point for opening Sell deals. The price provided traders with six chances to enter the future downward movement.

The bear trap is the reverse situation in the forex market. Let’s look at the example of gold (XAUUSD) on the chart H4. 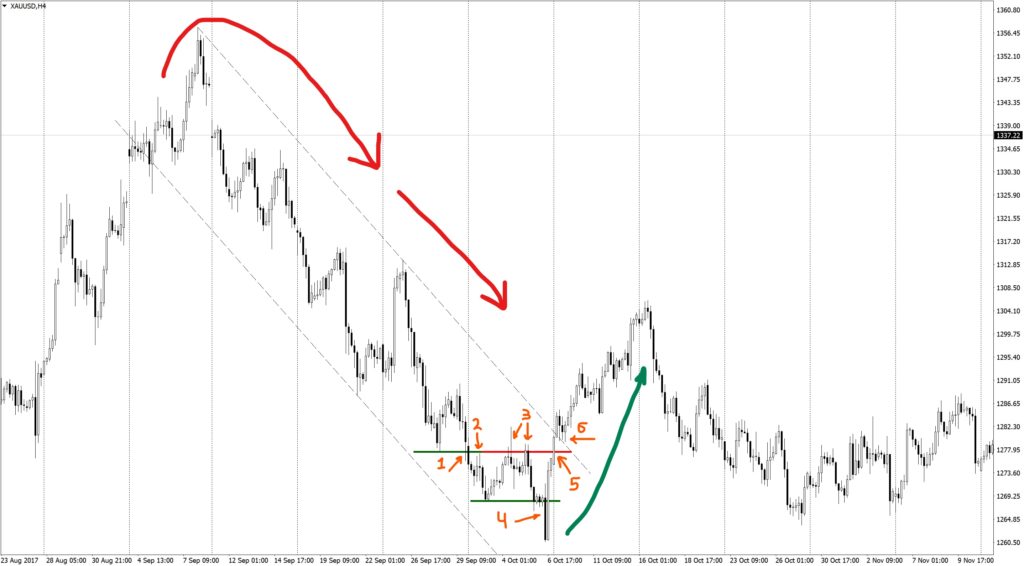 Gold was in a confident bearish trend. At point 1, traders overcome the next support. The support rally at point 2 and false breakouts at point 3 only confirm that the bears are in full control of the situation. Support becomes resistance. After several tests, traders impulse the next support at point 4 with an impulse. But by the reverse impulse the bulls take the situation under their control and bring the price to resistance at point 5. The gold bears entering the sales at points 1, 2, 3 and 4 were in trapped. They have no choice but to hastily close their positions, thereby increasing the momentum upwards. The resistance of the bulls to the point 5 makes the bears suffer losses. At point 6 they have another chance to close positions in a small loss. The price leaves the descending channel and receives an impulse to move up. 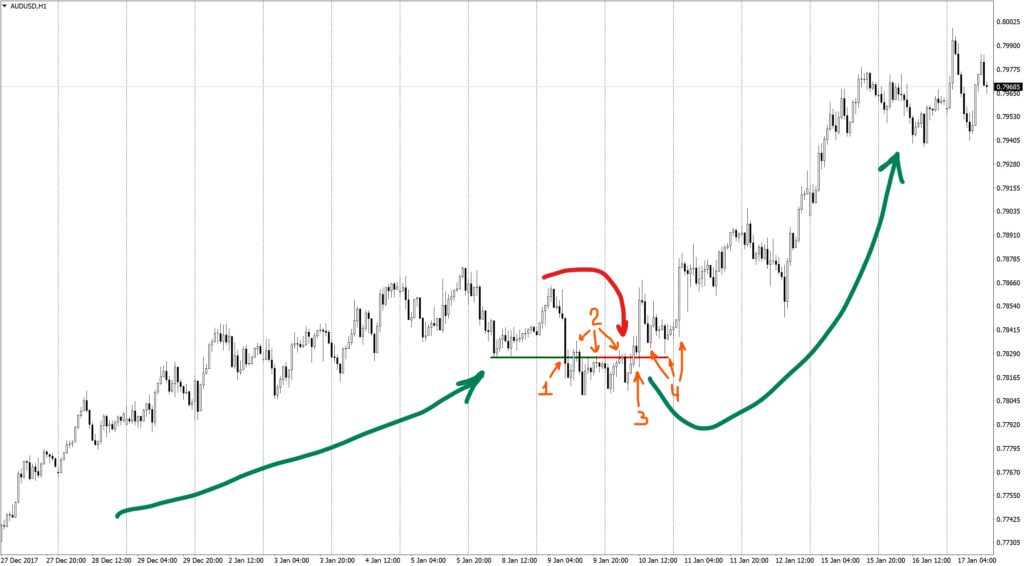 Australian Dollar (AUDUSD H1). An upward trend is developing. At point 1, bears break through the support. Support becomes resistance. At points 2, traders actively sell the Australian dollar hoping to continue moving down. The price is traded under resistance 23 hours. However, at point 3, the bulls are stronger, they break through the resistance, the price gets a boost from the sellers’ stops. Sellers are trapped. In points 4 they still have a great chance to close positions with a small loss and join the uptrend. The price starts to grow actively and the uptrend continues.

Avoiding traps is very difficult, because up to a certain point the situation fully corresponds to the expectations of traders and the direction of the price or trend movement. Trapping is not a mistake of the trader. This is a change in the market situation, about the possibility that a professional trader should know and be able to use in his own interests.

Another good example of a bear trap on the EURUSD pair. 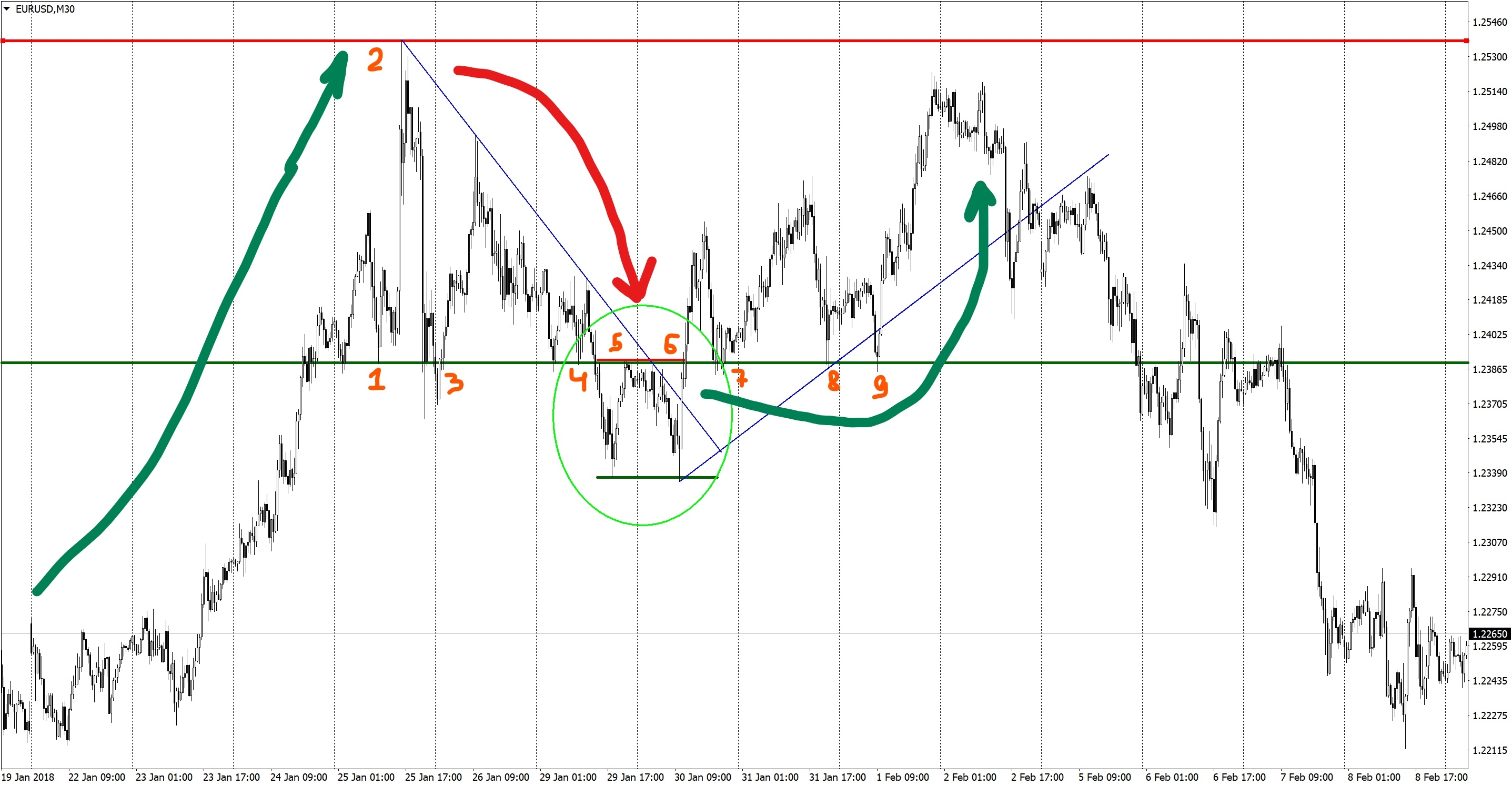 The pair was in an uptrend. At point 2, a new maximum was recorded over a long period. On the basis of the beginning of the last impulse, a support line (green line) is drawn at point 1. Accordingly, point 2 is the resistance. The price starts correction and tests support at point 3 making a false breakdown. After that the bulls can not make a new High and the price starts to go down. At point 4, after two tests, the bears break through the support. The price does the support retest at point 5. Support becomes mirror resistance. At this point, we see a trend reversal and traders are actively opening the Sell position. However, the price sharply unfolds and breaks through the resistance at point 6. Bears fall into a trap. The price tests support three more times at points 7, 8 and 9, after which the trend continues upward. Consider the situation on M5. 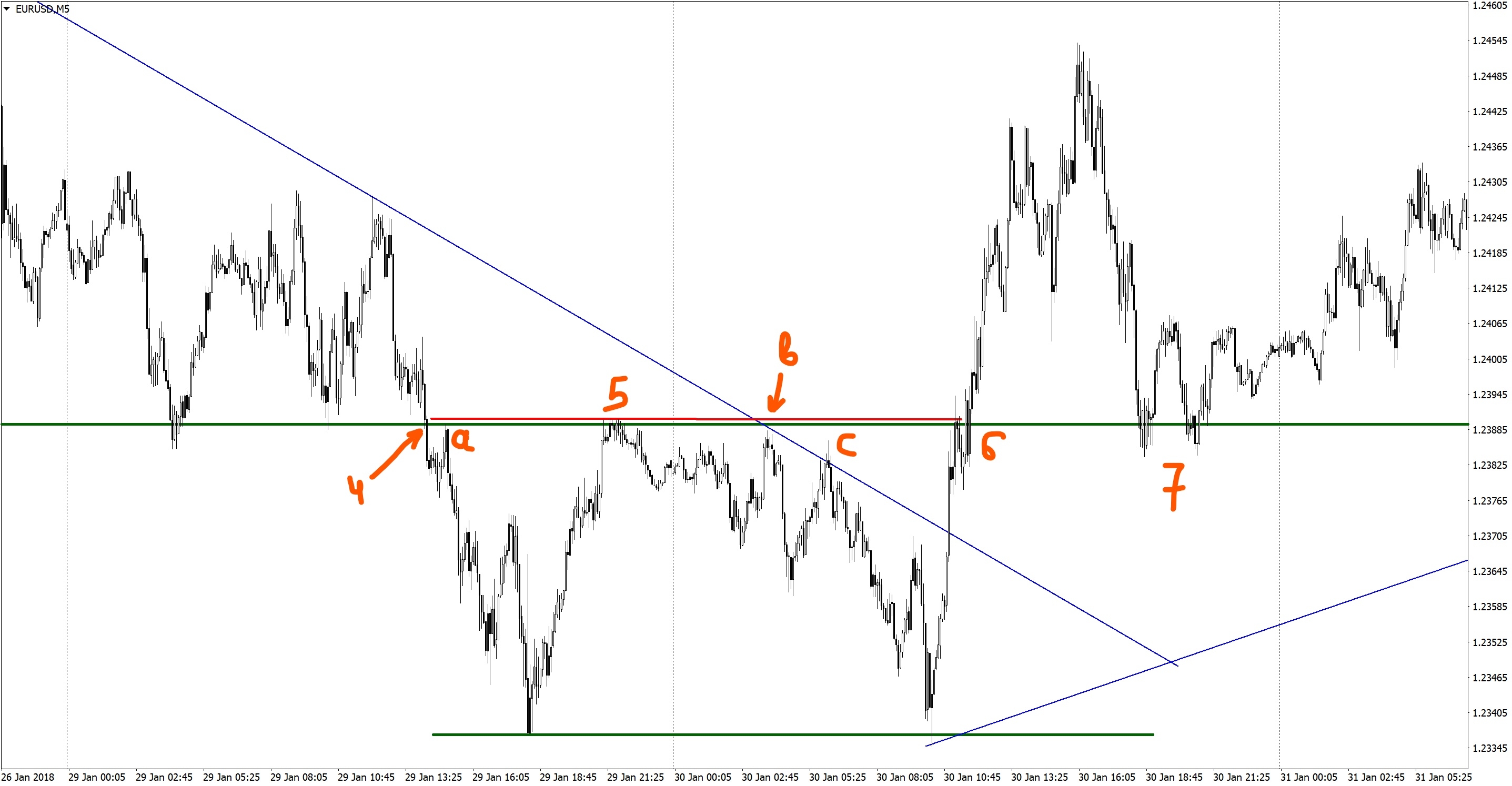 At point 4, after the breakdown of support, the price makes a retest at point a, which additionally confirms the strength of the bears. After retesting the punched support at point 5, the price tests it additionally at point b. The sloping trendline (blue) serves as an additional resistance and traders use this at point c. At this point, the situation looks like a confirmed trend reversal and traders open positions for sale on each rebound up. But the sharp impulse of bulls after breaking through the inclined trend line and the mirror resistance at point 6 leaves the traders who did not put the stops in the bear trap. The operation of the bears stops intensifies the pulse at point 6. The bears can close positions at point 7, which further enhances the upward momentum. For those traders who are aware of the specifics of the traps in the forex market, points 7, 8 and 9 provide a good opportunity to get into the upward movement at the best points.

What to do in case of falling into a trap. The main thing to remember is to trade only with stops. In the case of setting stops for the nearest minimum or maximum price, the loss from falling into the trap will be minimal. At the same time, as we see it is much more profitable to open positions when the price is rolled back to the level, and not to breakdown. In the case of a sharp impulse in the opposite direction, it is advisable to transfer the stops to a breakeven or to close the position with a plus. Hope in case of falling into the trap is the worst assistant of the trader and leads only to an increase in losses. Closing the position should be quickly, without hesitation and regret. But this is a great chance. Bull and bear traps very often act as reversal models of price movement. The stops of trapped traders reinforce the back impulse. Therefore, it is necessary to consider the possibility of opening a reverse position.

1 thought on “Bull and bear traps in the forex market”