In the past it was short-term interest rates—and the two-year bond yield, which reflects near-term anticipated rate changes—that were most important for major currencies. The more interest it was possible to earn in a country, the more money was attracted, and the more the currency went up. The extra yield available on U.S. two-year bonds above German two-year bonds, for example, was typically tightly correlated with moves in the dollar-euro exchange rate. 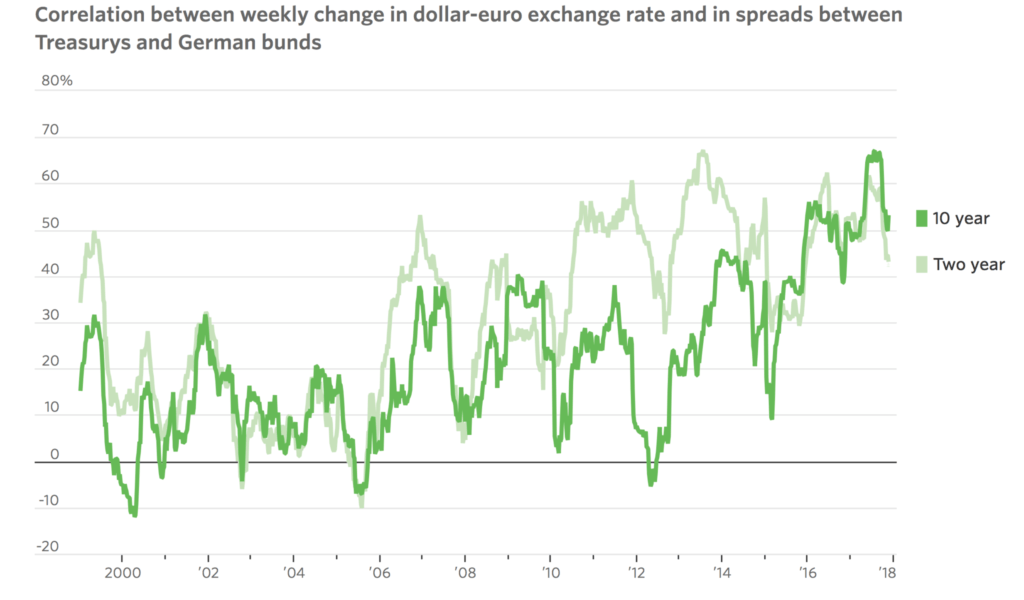 After more than $12 trillion of quantitative easing world-wide, currency markets are now more sensitive to the gyrations of the long-dated bonds vacuumed up by the central banks—and that makes them even harder to predict than usual.

The change comes at a delicate time for central banks, with the U.S. tentatively cutting its holding of Treasurys and mortgage bonds by $10 billion a month and the European Central Bank about to taper its bond-buying program. A currency market more focused on long-dated bonds gives policy makers less control over exchange rates and domestic financial conditions than usual, just at a moment when they want to keep a firm grip to avoid upset.

Bonds and the DollarThe link between the dollar and the extra income available from U.S. safe assets is strong. Unusually, this year the link was stronger with long-dated bonds than short-dated ones.

There are at least two really good reasons why this should be causal, not merely chance correlation. First, money flows. Higher interest rates attract short-term speculative cash chasing what traders call “carry,” the extra interest available in one currency over another. Second, fundamentals. Higher rates are a sign that an economy is doing better or inflation is rising, both of which justify a stronger currency, at least in nominal terms. 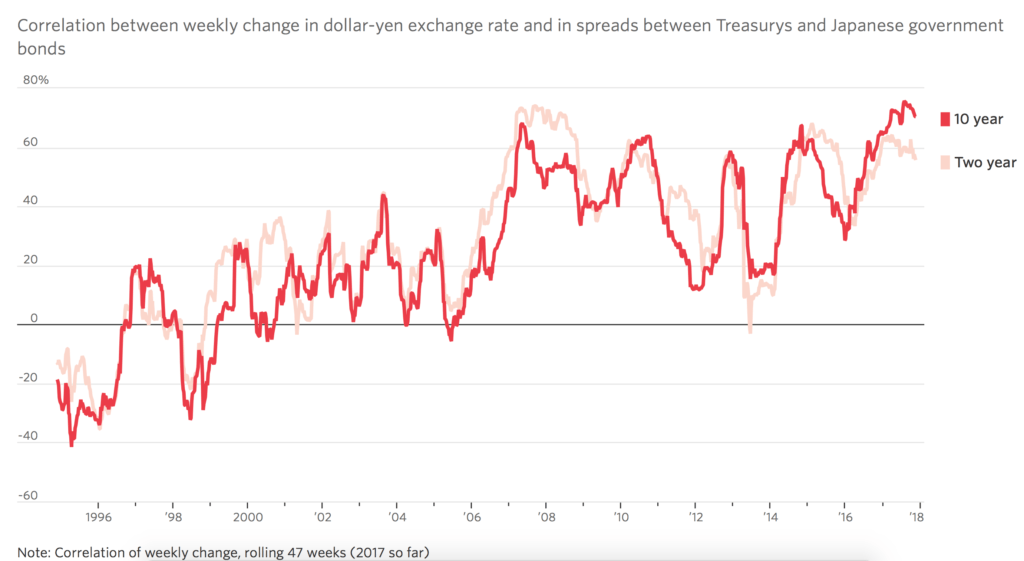 The logic has broken down this year for both flows of money and fundamentals, and the year-to-date correlation between 10-year yield differentials and the dollar’s value against each of the euro, yen and sterling hit the highest since at least the early 1990s in September. 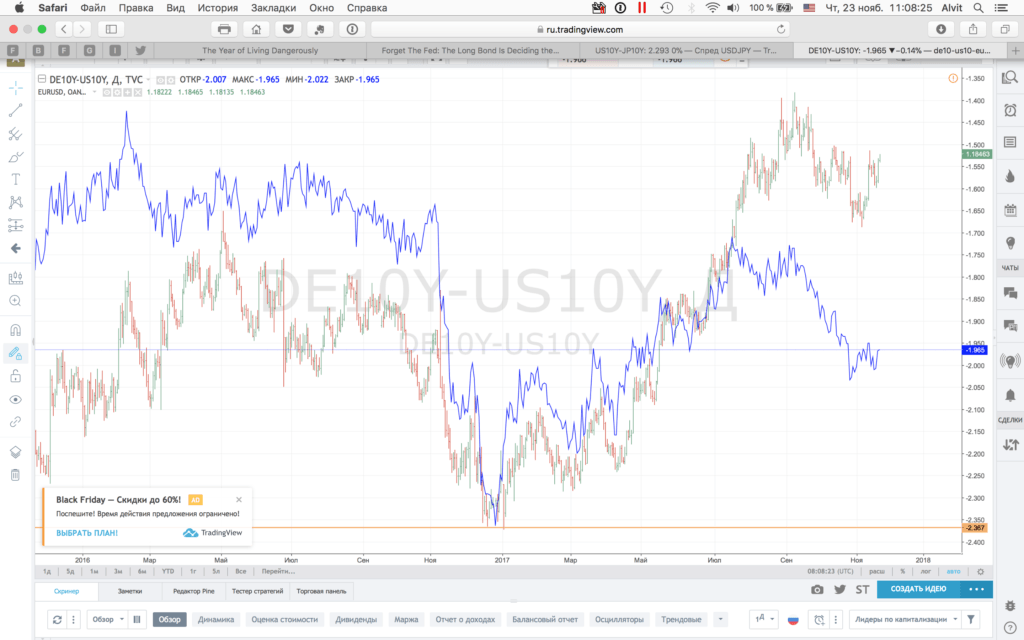 Japanese and European investors have been buying longer-dated U.S. Treasures because of negative interest rates on cash and short-dated bonds at home, so flows are more sensitive to long bond yields than in the past. At the same time, central banks are suppressing the usual reaction of economic fundamentals. The ECB has promised not to raise rates for a long time, even as the eurozone economy is growing at its fastest pace in five years. That means speculation about economic fundamentals moves longer-dated bonds a lot more than short-dated bonds, and in turn moves the currency. 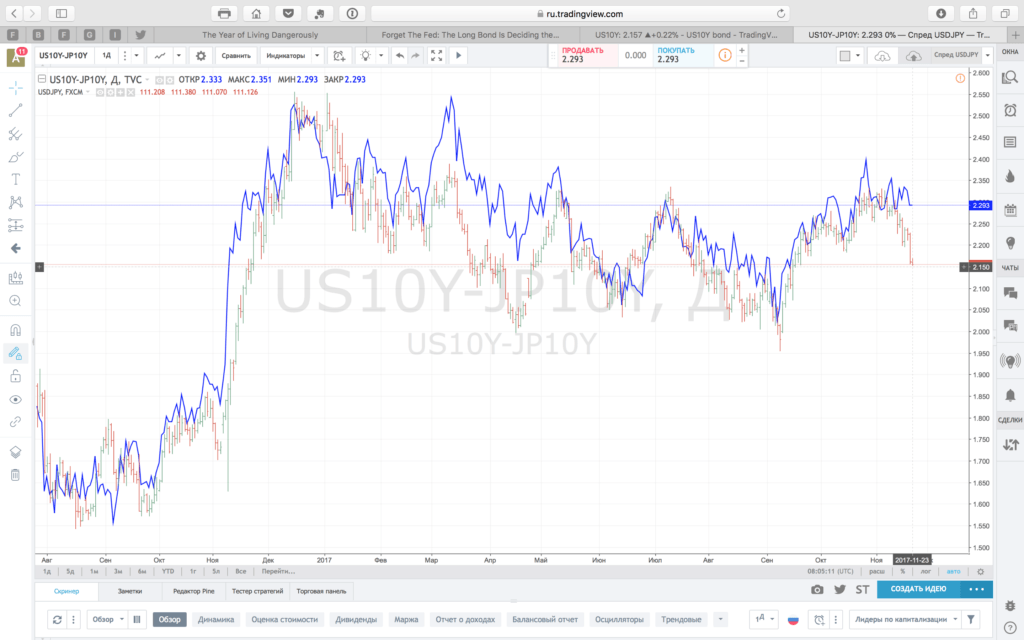 “The short-term [rates] differential contains less information because you essentially have stability of short-term rates in Europe,” says Amundi fixed income and foreign exchange strategist Bastien Drut in Paris. Instead, the German 10-year bund swung about as bets on the ECB reacting to a stronger economy by pulling back from its bond-buying program ebbed and flowed—and the euro’s value against the dollar moved with it.The focus on long bonds helps explain why many traders were caught off guard by the plunging value of the dollar this year, when the currency disconnected from its usual tie to short-term yields. The dollar dropped even as the Federal Reserve raised the overnight policy rate twice, with a third raise expected next month. What mattered instead was the 10-year Treasury yield, which plummeted from 2.5% in late December to a low of 2.05% in September, even as German 10-year bond yields picked up and Japanese yields did almost nothing.

Technically the major central banks should care little about the currency, with policy about the dollar the preserve of the U.S. Treasury and the ECB targeting inflation, not the exchange rate. In practice a stronger or weaker currency can have dramatic effects on how tight monetary policy is, neutralizing or exaggerating the effects of changes in interest rates.

This year the Fed’s efforts to tighten monetary policy have been undone by the weaker dollar and lower 10-year yields, which supported booming credit and equity markets. The U.S. has the loosest financial conditions since 1993, according to a measure compiled by the Chicago Fed, despite two rate rises. Back in 1993 bond differentials were strongly tied to the value of the dollar, although back then short-dated bonds mattered more.With inflation still below target, the Fed hasn’t been that bothered by the failure of its interest-rate policies to bite. If that changes, 1993 was a past that would make an unpleasant prologue: the following year the Fed seized control with surprise rate increases that shocked investors, pushing up bond yields and breaking their link to the dollar entirely.

This post is written on the materials of the article WSJ –  https://www.wsj.com/articles/forget-the-fed-the-long-bond-is-deciding-the-dollars-future-1511198751

(1 ratings, average: 5.00 из 5)
Leave comments. Ask questions. Subscribe to the newsletter on the main page of the FXTAA.com and you will be the first to learn about the release of new materials on our site.