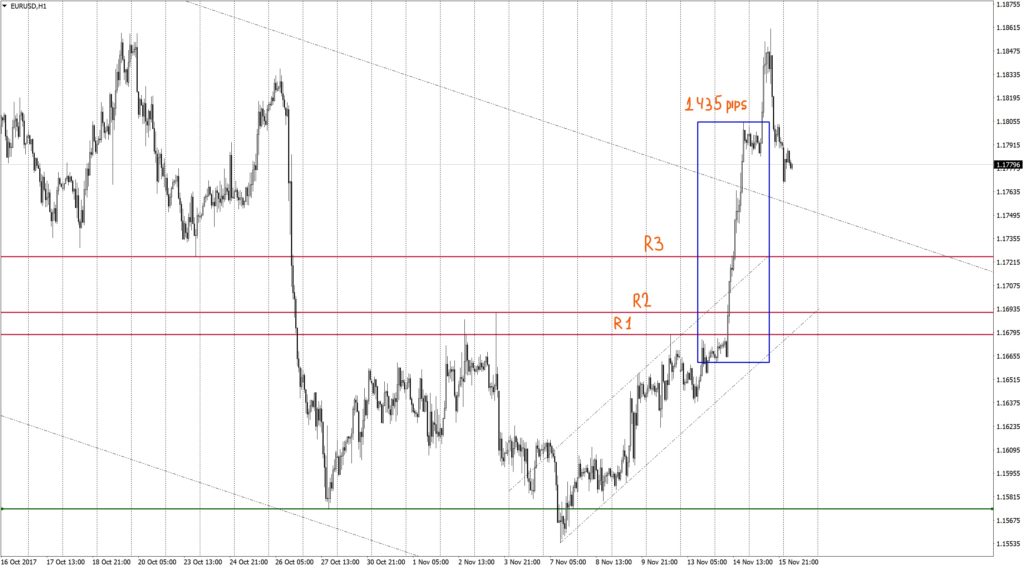 A short squeeze is generally triggered by a breaks through a strong level of resistance and removal of Stop Loss orders. Although the turnaround in the currency is fortunes may only prove to be temporary, few short sellers can afford to risk runaway losses on their short positions and may prefer to close them out even if it means taking a substantial loss.

If a currency starts to rise rapidly, the trend may continue to escalate because the short sellers will likely want out.  Traders with short positions may be forced to liquidate and cover their position by purchasing the currency. If enough short sellers buy back the currency, the price is pushed even higher.

It was this situation that was formed on the EURUSD pair a few days ago. Let’s look at the chart H1.

Price breaks the resistance level R1, trigger stops and movement gets a sharp boost up. During the day, the EURUSD pair passes 1435 pips, which is more than 2 day ATR (averaged over 10 days). Let’s see how events developed. 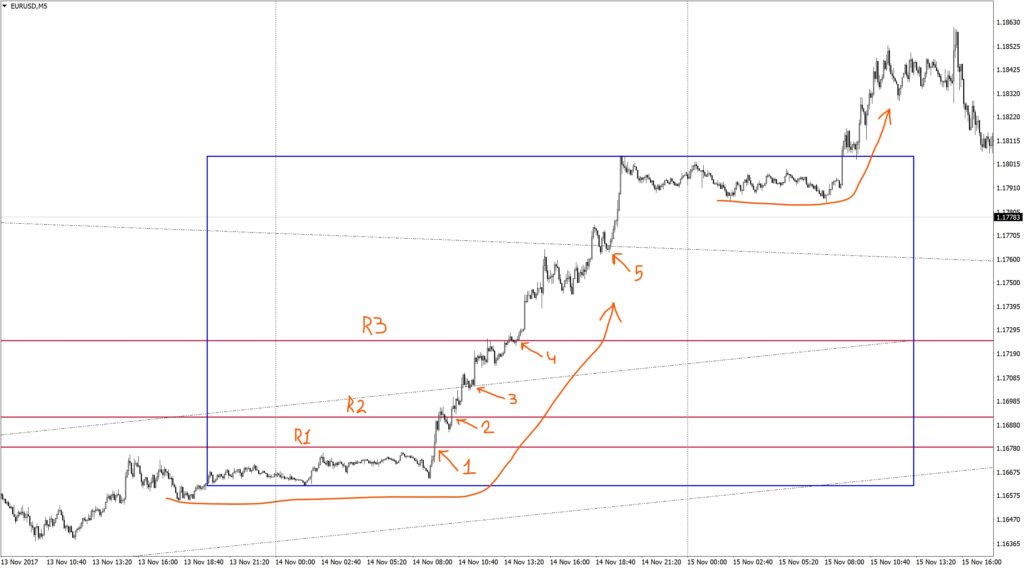 EURUSD pair of impulse candle breaks the resistance R1, then resistance R2, the upstream channel (3) and resistance R3. The price gets an additional strong impulse passing through the boundary of the long-term downward channel (5). At each of these levels, after a minor correction, the price gets additional acceleration from closing short positions. The day after the night pause and consolidation in the Asian session, the pair continued its upward trend movement and only then began a correction, primarily due to profit taking on open long positions.

Short squeeze happens quite often in the foreign exchange market in conditions of a large number of open short positions and a correct understanding of this situation will help traders to obtain additional profits.

Another very interesting example of short squeeze. It is associated with the release of highly volatile news and the reaction of traders to them. 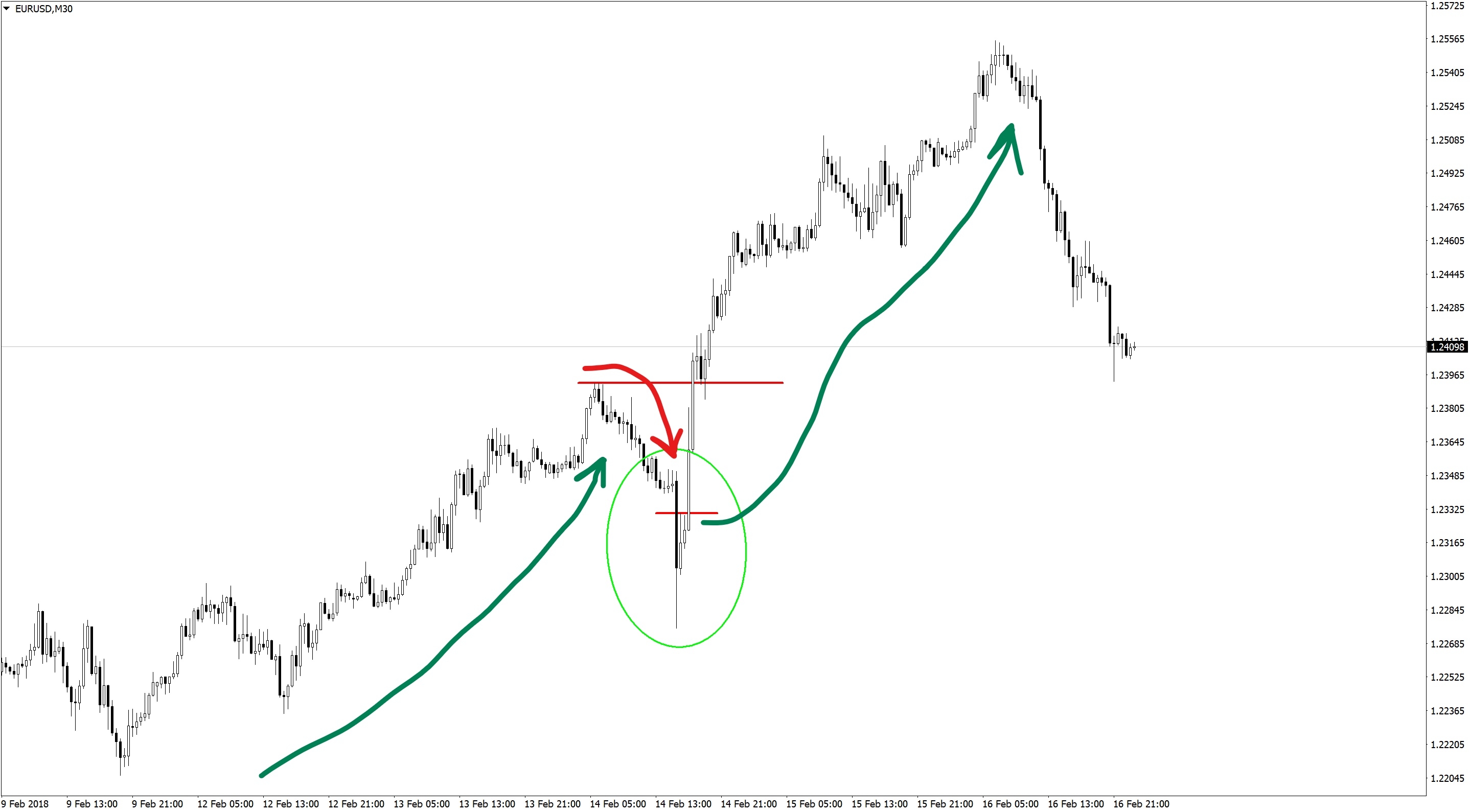 The EURUSD currency pair was in a long-term uptrend. The market was waiting for the release of important data on inflation in the US. In the case of the release of data confirming the increase in inflationary pressure in the US, this would be a strong signal for the strengthening of the US dollar, and, accordingly, the fall of the EURUSD pair. That’s exactly what happened. The chart shows that the market expected the release of similar data and from the opening of the European market was declining. At the time of the news, the first reaction of traders and robots is seen in the form of a strong bearish candle inside the green circle. However, then the market sharply unfolds and the upward movement updates the long-term highs of the pair. Let’s consider in more detail on the M1 chart how events developed. 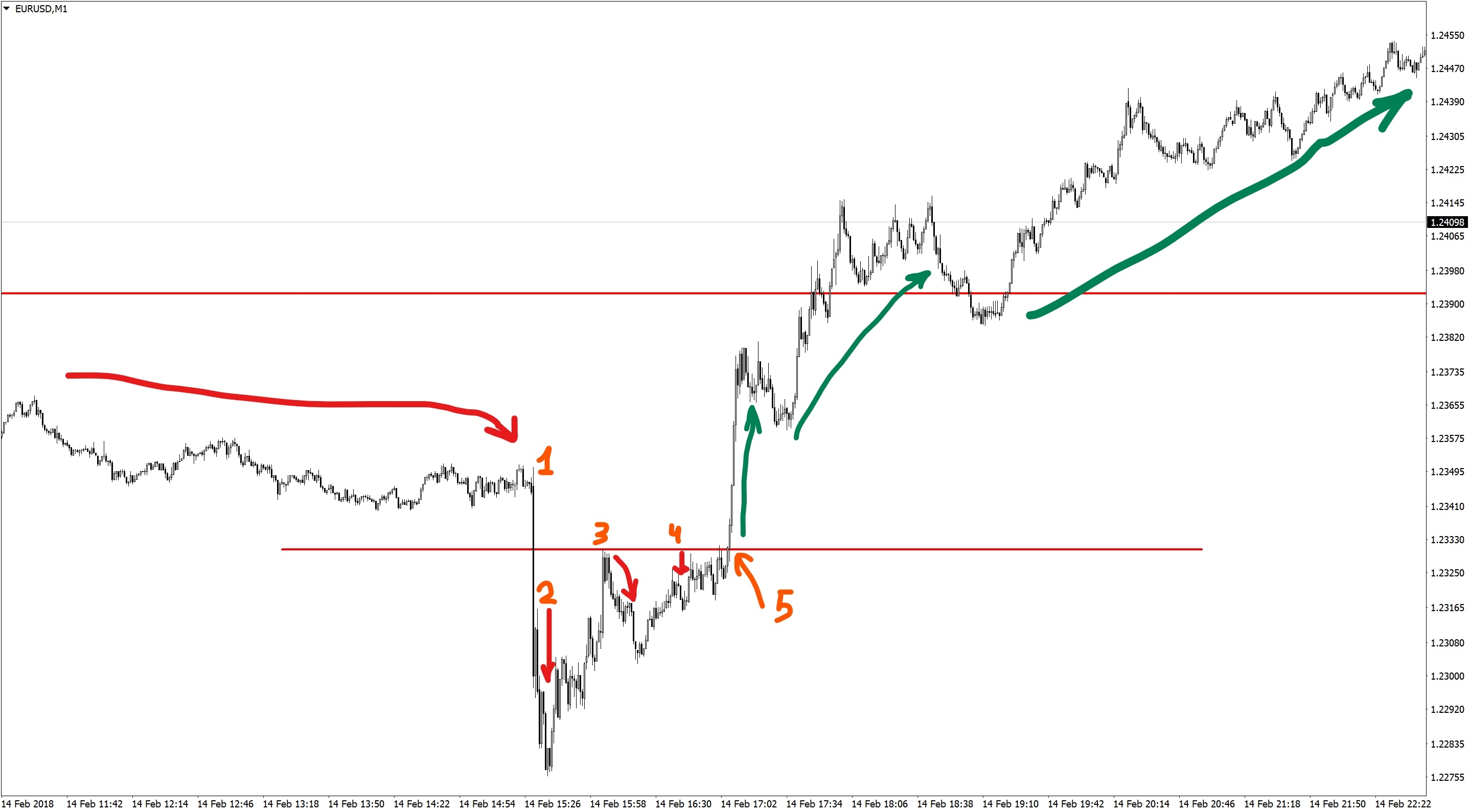 Point 1 is the time of publication of US CPI data. Strong downward movement. At each rollback at points 2, 3 and 4, traders open Sell positions in the hope of continuing the movement with stops behind the resistance level passing through points 3 and 4 (red line). However, on the fall, euro buyers find themselves stronger and completely buy out the whole offer for the euro. And when the resistance level breaks at point 5, stops start to work and sellers of the euro close their positions. As a result, we see a practically vertical movement of the pair up at the sellers’ stops. The movement turned out to be so powerful and unexpected that the growth of the EURUSD pair continued and the next day with the renewal of multi-year highs.

The reason for the active purchases of the euro against strong news in this situation, no one “expert” explained logically. However, the competent use of technical analysis and understanding of the situation of “short squeeze” helps traders to understand the situation and at least reduce possible losses.

(3 ratings, average: 5.00 из 5)
Leave comments. Ask questions. Subscribe to the newsletter on the main page of the FXTAA.com and you will be the first to learn about the release of new materials on our site.
Be prudent, observe risk management and trade in a plus.
SUBSCRIBE TO OUR NEW ARTICLES
(Visited 238 times, 1 visits today)