The triangle is a very common and frequently occurring figure of technical analysis in the Forex market. Correct interpretation of the triangle and its application at the entrance to the market significantly expands the arsenal of trading techniques of each trader. 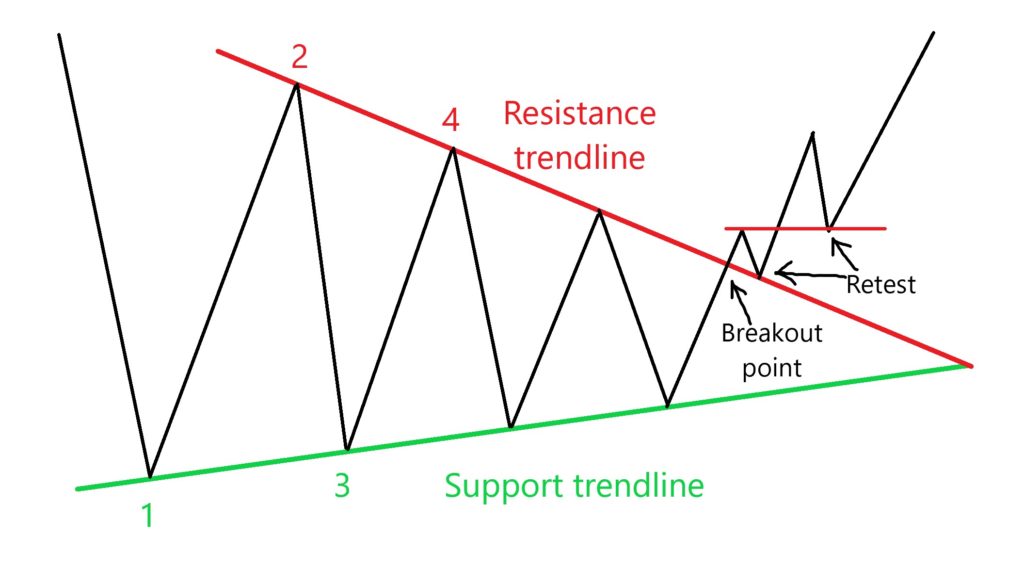 There are several types of triangles – ascending, descending and symmetrical. However, I believe that it is necessary to focus not on the form, but on the essence of the model itself and the reasons for its formation.

Triangle is a consolidation model, as we see dampening fluctuations in the market. The market is compressed into a spring and at some point the impulse comes and the price goes beyond the boundaries of the figure. As in any consolidation model, we are more likely to exit the triangle in the direction of the previous trend. However, this does not always happen, sometimes the triangle appears as a reversal pattern. So do not guess and prematurely open positions. It is necessary to have patience and follow the behavior of the price inside the figure and the interaction of prices with sloping lines of resistance and support. On H4 a figure can form for several days. Do not try to “pull” the triangle on the chart, if it is not there. The figure should be clearly discernible and unambiguously interpreted not only by you, but also by all other traders, regardless of the possible spread of quotations. It is in this case that it will be properly developed, since all traders will use clearly visible trend lines and make decisions in the event of a breakdown of one of them, forming and maintaining momentum in the direction of breakdown.

Since the triangle is formed by oblique trend lines, it is necessary to approach the analysis and selection of points for entering the market using the principles of trend movement. We are waiting for the breakthrough of one of the trend lines and having received confirmation of the truth of the breakthrough, we enter the market in the direction of a breakthrough on retest. The price does not always retest the sides of the triangle, it can return to the level of the previous pierced High or Low.

The triangle is a very clear model and is clearly distinguishable on the graphs, however the strongest and right signals appear on the older timeframes, not below M30. I use H4 for this analysis. The price very often makes false breakdowns of the sides of the triangle, traders seem to try the market, they look where there are large orders to determine the direction of traffic. False breakdowns of the boundaries of the triangle further confirm the strength of the model. Therefore, to analyze the interaction of price with the trend lines in the triangle, you can drop to lower timeframes – up to M1. This helps to more accurately determine the breakdown or false breakdown we see when the price interacts with the boundaries of the triangle. The reverse situation occurs when the price inside the triangle unfolds and does not reach one of the parties. With a high probability, the breakdown will be in the opposite direction. Let’s see some examples. 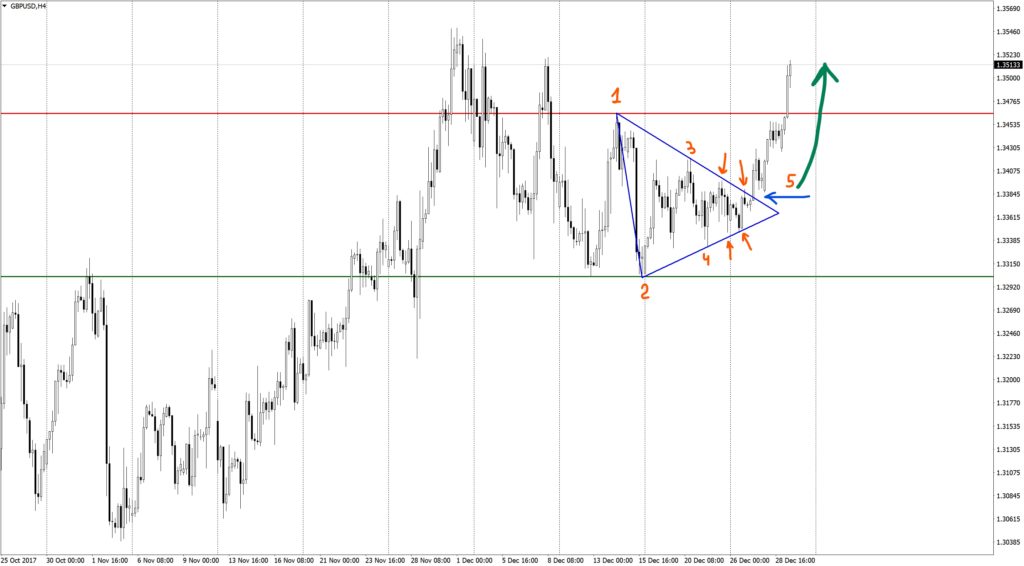 On the chart H4 of the GBPUSD currency pair, points 1 – 4 formed a triangle. Clearly seen as the price consolidates. Next, the price interacted four times with the boundaries of the triangle before making a breakthrough at point 5. The breakout occurred with a strong candle after which there was a retest that did not reach the border of the triangle. This retest is the optimal entry point to the movement that has started. Let’s see how the price left the triangle on M5. 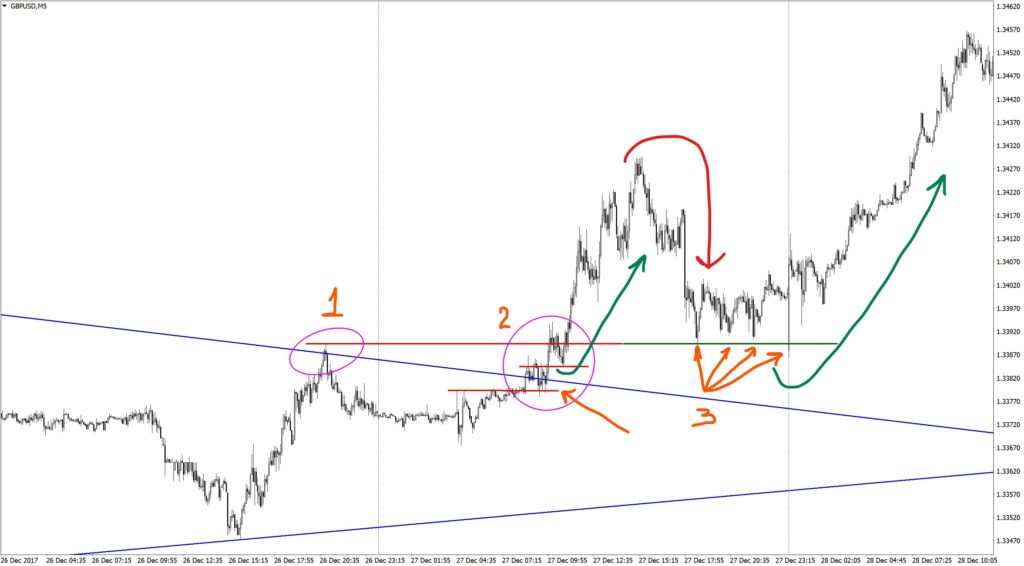 At point 4, the price broke off from the lower boundary of the triangle, after which it tested the upper limit. The Asian session held the price in consolidation and again went to test the upper limit. Note that traders did not go down after point 1, which already speaks of the bullish sentiment. At point 2, the price breaks and is fixed behind the inclined line of resistance and pierces the resistance level formed by High at point 1 with a strong impulse.

Point 2 is the first good entry point to the market. In the US session, the price is adjusted to the resistance line, which has become mirror support and four times it tests at point 3 on the chart. These are the next great entry points. Further, the price develops the momentum of the uptrend. Note that the exit from the triangle took the traders for a whole day, during which there were several excellent opportunities to enter the bullish momentum. 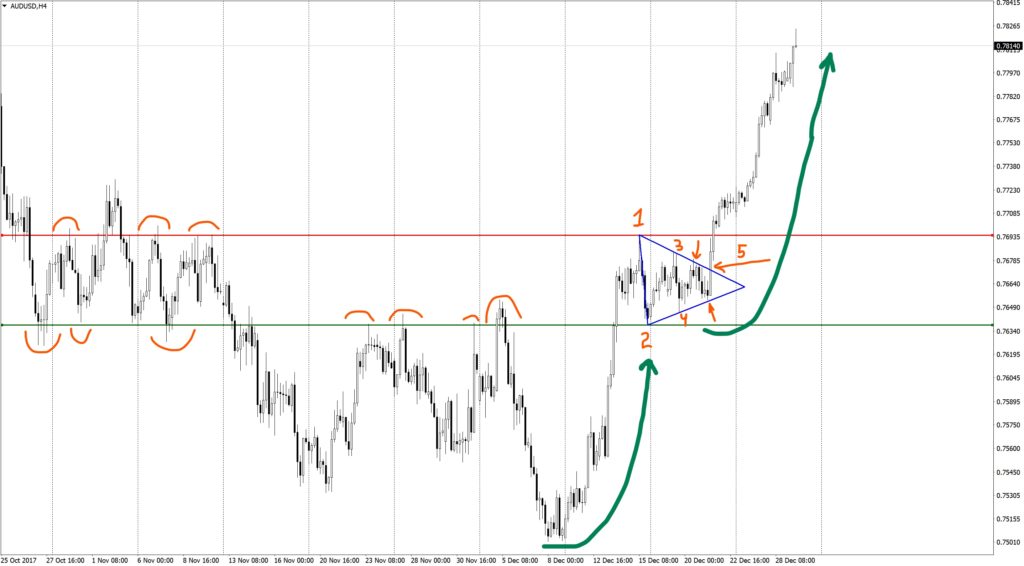 The AUDUSD pair after a powerful upward momentum spends in consolidation for more than a week, forming a triangle figure by points 1-4. After the formation of inclined support and resistance lines in the form of a triangle, the pair tests both boundaries and a powerful momentum at point 5 continues the uptrend. Let’s look at the M5, whether we had the opportunity to enter this trend. 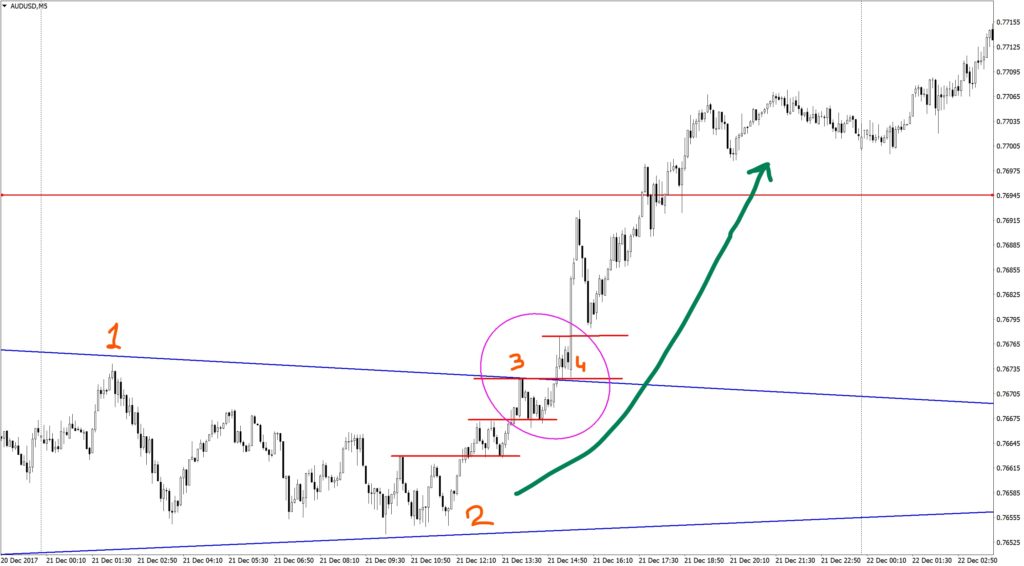 At points 1 and 2, the pair tests the upper and lower boundaries of the triangle. we draw attention to the fact that the price in both points does not reach the boundaries of the triangle, which indicates that traders are not ready to move in a certain direction. From point 2, the ascending movement begins according to all the rules of trend movement. The pair breaks the previous high, tests it and makes a new High. At point 3, the pair meets the sellers exactly at the triangle border, which indicates that traders see and take this figure into account when making their decisions. Next, the pair punches and tests the resistance line at point 4. This is the best entry point to the market – the point of no return. AUDUSD powerful momentum goes up (it was news), but deeply adjusted – this is the second good entry point. Next, the pair continues its upward movement until the end of the trading day. A powerful upward movement continued the next day.

But not always the triangle completes its model in the direction of breakdown. There are also more difficult situations. 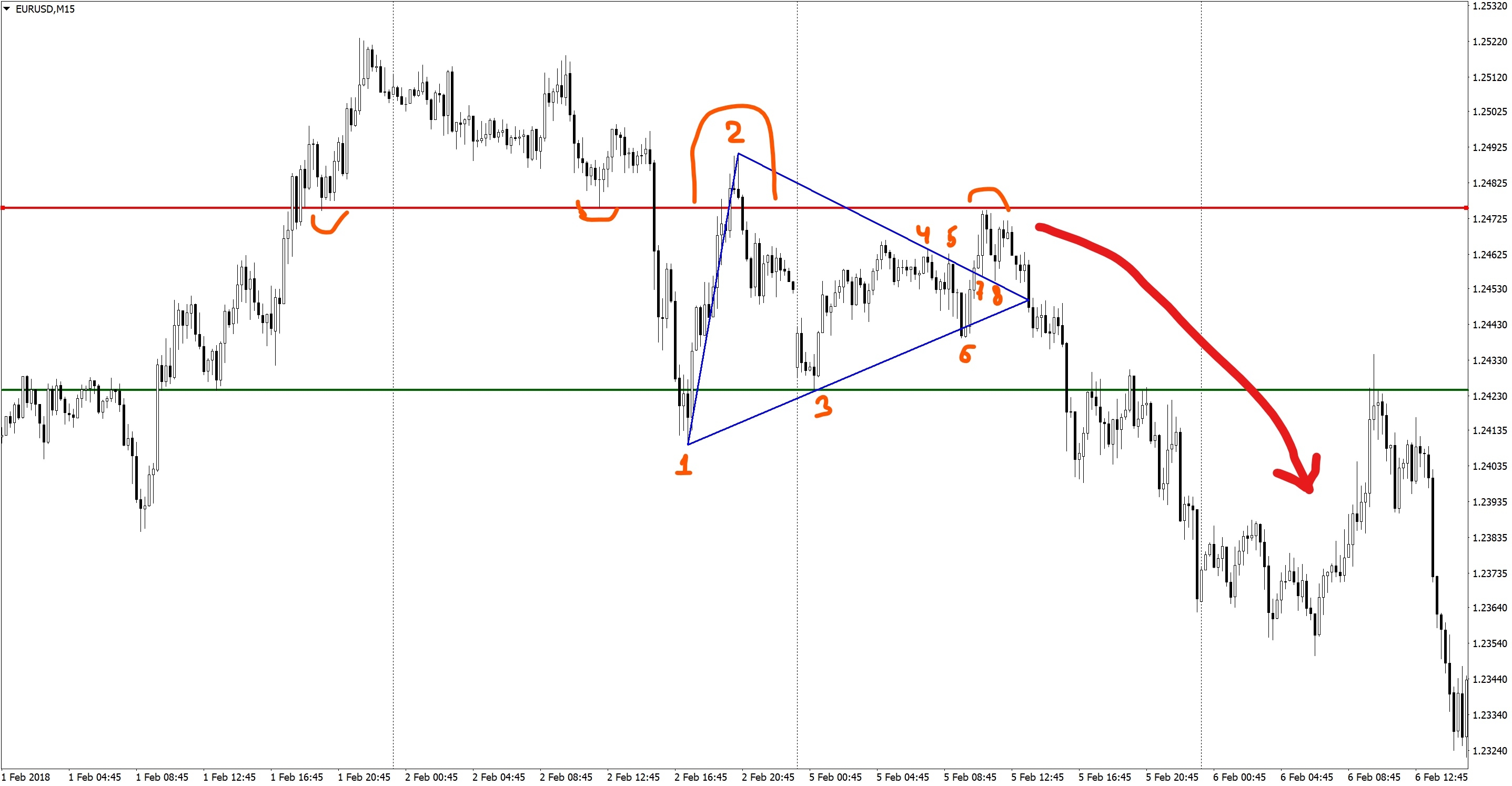 For example, the pair EURUSD formed a triangle. It is drawn at points 1,2,3,4. The pair tests the upper boundary at point 5, then the bottom at point 6. Then, the breakout of the vertex of the triangle occurs. The price doubles the punched border at points 7 and 8, providing an excellent opportunity to enter a growing movement. However, the price could not overcome the resistance (the red line) and touching the tip of the triangle goes down. In this example, we can note the fact that although the price did not go to the breakdown, but there was minimal movement. This should be enough to pull up the stop as close as possible to the breakeven. The price during two hours is traded just below the tip of the triangle, which should allow you to reverse the position from buy to sale.

Thus, if to triangle is applied to the principles of price trend movement, one can enter into deals with a very high positive expectation of profit. You should only have the patience to wait for the end of the consolidation and follow the decisions of traders when the price interacts with the boundaries of the triangle.

How to open trades when working with a triangle on forex and avoid false breakdowns read in the material “How to trade in triangles on Forex“.

A good example of analysis of the technical figure of a triangle on the USDJPY currency pair you can study in this article on the site.

Another example of working off a technical figure is a triangle on a pair of EURUSD by this link.

And another example – Euro is consolidated in a triangle.

(1 ratings, average: 5.00 из 5)
Leave comments. Ask questions. Subscribe to the newsletter on the main page of the FXTAA.com and you will be the first to learn about the release of new materials on our site.