The yield of the benchmark bonds historically reflects investors’ expectations about the level of interest rates in the country. Accordingly, the spread of the yield of bonds of different countries helps to identify a stronger currency in a comparable currency pair. However, in the pair EURUSD something broke down in this fundamental connection. 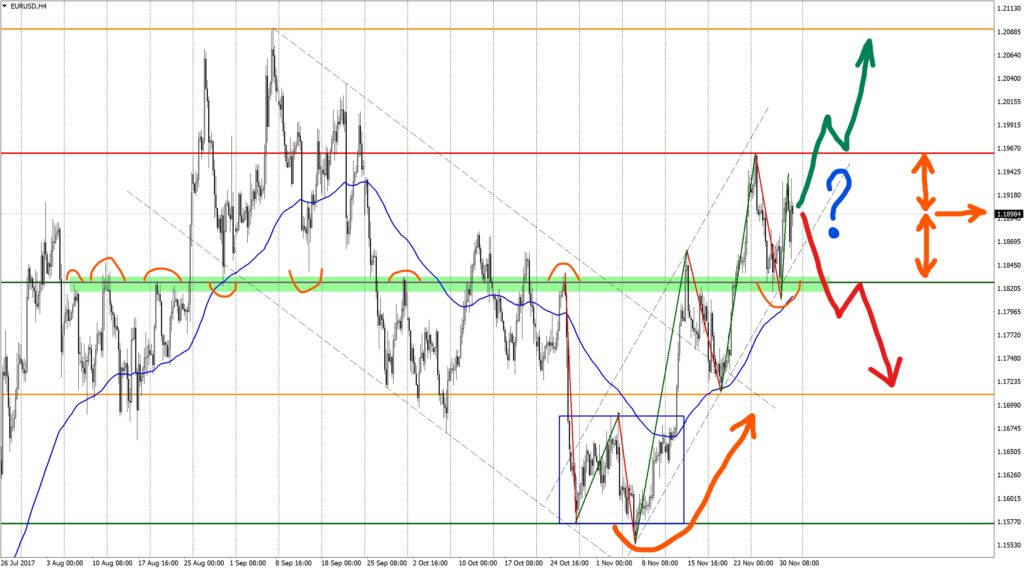 Technically, the pair EURUSD is in a stable uptrend. This is confirmed by all the technical indicators. Last week, the pair tested the strong mirror support level 1.18270 (green) three times and after a false breakdown it went up. However, even given the high volatility on Michael Flynn’s statement, the pair could not approach the resistance at 1.19600 (red) and finished the day having formed a beautiful long-legged doji on the daily chart. What, as you know, is a figure of uncertainty and not determination. And the pair closed the week almost in the middle of the trading range. So what stopped the bulls in EURUSD?

The consumer price index in the euro area in the annual calculation grew from 1.4% to 1.5%, and the core CPI remained unchanged 0.9%. Data from the United States on the contrary showed an increase in the core CPI from 1.7% to 1.8% for the first time in 5 months. After the publication of data on inflation in the euro area, EURUSD sharply went down to test support, but it was bought out. Friday night I personally was busy watching a two-part American show – voting on the tax reform project and the reaction of the markets to Michael Flynn’s statement. This all led to a strong volatility in the market, but let’s turn our attention to the dry residue. 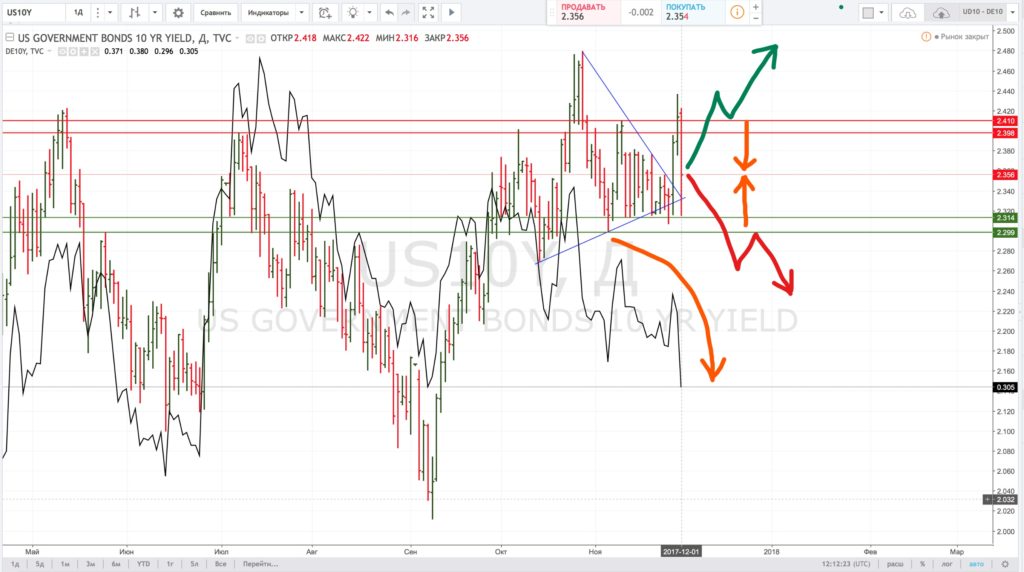 The yield of 10 US bonds on successful voting in the Senate has finally come out of the triangle (about which I have written many times) and tested the key resistance by 2.4%. Then the bonds fell on the statement of Michael Flynn, but stopped exactly at the support level and ended the day (as well as the EURUSD pair) exactly in the middle of the range. But the most interesting is different. The black line on the chart indicates the yield of 10 year German bonds. Buyers of German bonds correctly perceived information about inflation in the Eurozone. With such inflation data, one should not expect a change in the monetary policy of the ECB before the autumn of next year. The fall in the yield of German bonds further increased the spread of yields with US bonds, which led to an even greater discrepancy between the EURUSD exchange rate and the spread off 10-year yield  of the US and German bonds. 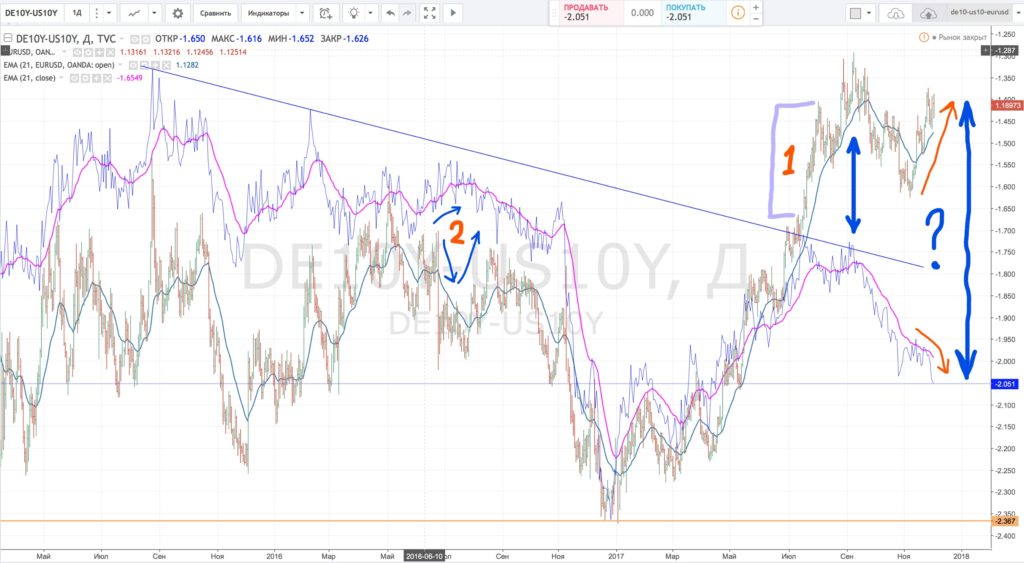 According to the WSJ, the correlation between EURUSD and the spread of 10 year bonds is now slightly more than 50%. But if we carefully study the graph, we see that the direction of motion, the correlation is very strong (in the chart, the value of the spread – the blue line with purple 21 EMA is inverted = DE10Y-US10Y). In the case of past settling in the past, the EURUSD rate quickly eliminated it (as in point 2 in the chart).

I unfortunately did not manage to properly combine the graphics of spread and EURUSD due to the limited historical data in the system. If someone does it better and more clearly – I will be grateful for the sent schedule or the link. The strong discorrelation of the EURUSD rate began after the ECB meeting in July 2017, when Draghi said that the bank will return to the issue of QE decline in the fall, which was perceived by the market as a strong bullish factor and the EURUSD rate broke the upper boundary of the long-term range (zone 1 on the chart) and reached the maximum – 1.20920.

Looking carefully at this spreadsheet of the DE10Y-US10Y spread, I have a strong doubt that the December rate increase of the Fed is “included in the price”. But there are plans to raise three more times in 2018 and the Fed’s go on balance-sheets normalization. This is the relationship between the dynamics of the Fed’s rates and the yield of 10-year bonds.

Raising the rate of the Fed if it does not raise the yield of bonds, then at least it will not let it fall much. And in the Eurozone, the situation is different. There are currently no monetary drivers for a significant increase in bond yields other than the general growth of the economy and, above all, Germany. And before the fall of 2018 is unlikely to appear.

In my opinion, the miscorrelation between the EURUSD exchange rate and the bond yield spread should be eliminated by the market. Either the EUR will go down, or something must happen in the US that will force investors to go into defensive assets and actively buy bonds – impeachment, a war with North Korea, or Trump’s meeting with Putin (which may be worse). Or maybe there is some “black swan” whom we do not know ??? What do you think about this issue?

(No ratings yet)
Leave comments. Ask questions. Subscribe to the newsletter on the main page of the FXTAA.com and you will be the first to learn about the release of new materials on our site.