Determining the direction of the prevailing trend at the moment in the market is a very important skill of any trader, without which it is practically impossible to trade profitable, and the process of currency trading turns into a constant struggle with the market. Typically, the market wins. At the same time, understanding and using the principles of trend movement is an almost complete trading system based directly on Price action. 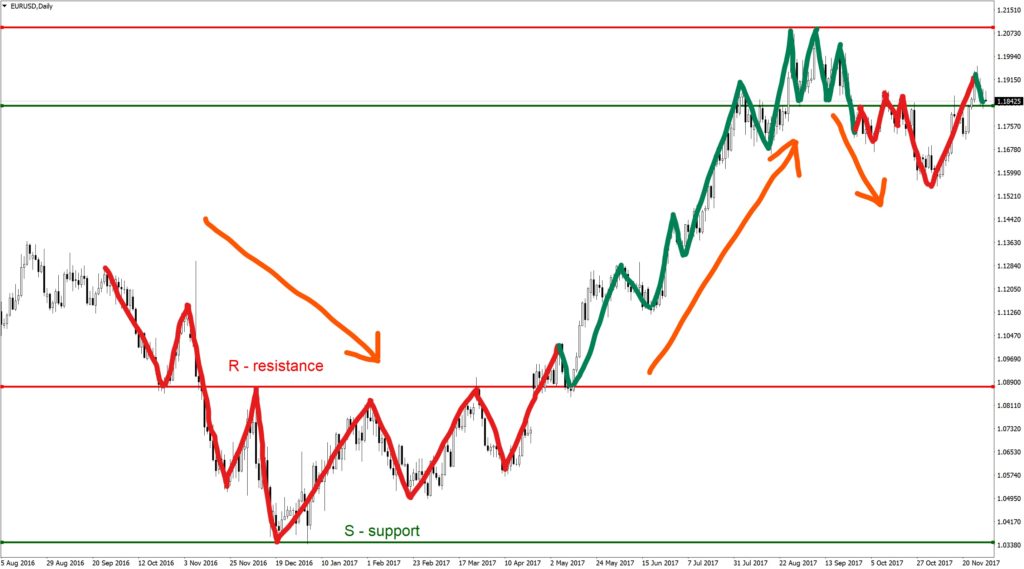 So what’s the problem? After all, the trends are written in all textbooks, but how to define them is known since the beginning of the 20th century. Charles H. Dow gave the trend definition used so far – “with an uptrend (downward) trend, each subsequent peak and each decline should be higher (lower) than the previous one.” The problem is that the trends are perfectly visible on the past history, as in the graph above.

The structure of trend movement consists of alternating pulses and pullbacks (corrections), which respectively end with the Highs and Lows. High and Low can be called swing points. And without a clear definition and understanding of each of the stages of the movement, confusion arises, especially for novice traders – what is happening in the market now?

Correction, momentum, the trend turned or not, and whether there is any trend or a flat, what timeframe to look at, etc. All this misunderstanding leads to errors when opening positions and, accordingly, loss of money.

I deliberately do not illustrate definitions with schematic images. They are present in all textbooks. In my opinion it is more correct to look at examples on real graphs. Before us is H4 chart of the EURUSD pair. For convenience, number all High and Low and trace the development of the trend. 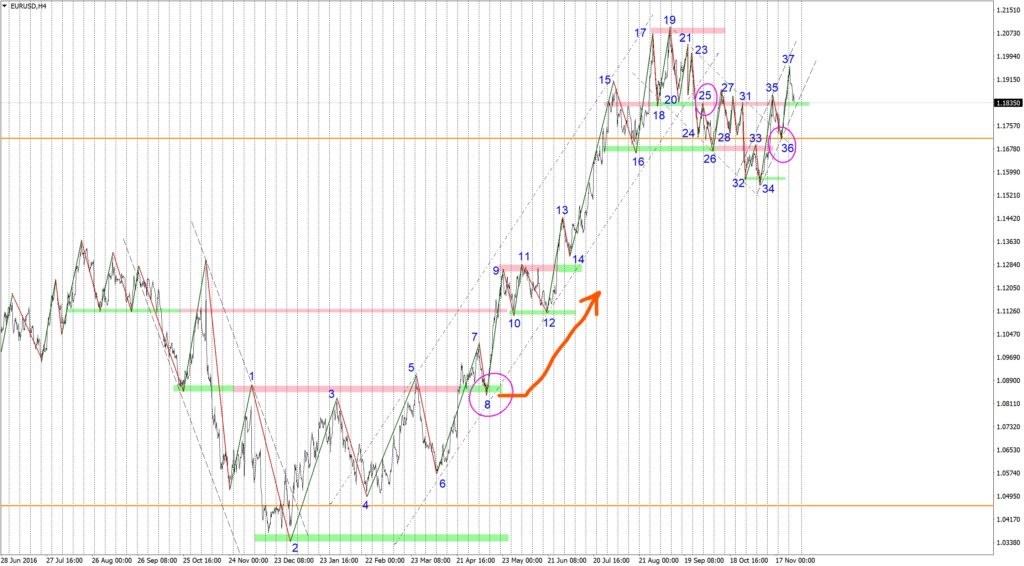 The declining trend (the left side of the chart) led to a correction. At point 1, the correction was completed and the trend continued to point 2. We carry out the resistance level after 1 and the support level through 2. The trend correction reaches 3 and the price unfolds. At the moment, the downward trend is still in force. We expect momentum on the trend below point 2. If you remember, at that time there were very strong bearish sentiments for EUR. All just talked about the imminent achievement of parity in the pair EURUSD. However, at 4, the price turns around and goes to point 5 – testing the resistance.

Flat begins, since points 3 and 4 lie within the range of the last impulse generated by the last one in trend 1-2. At point 5, we see a false breakdown and the price again moves down the trend to 6. After a turn at point 6, we see the new High and Low. 5 above 3, and 6 above 4. But we can not talk about the trend reversal until we see the fixing of the price above the resistance held through 1. The price breaks through the resistance and makes a new High at 7. Testing the resistance level at point 8 and breaking up from it gives rise to a new uptrend. Resistance is becoming support and the trend is gaining momentum. From point 8 to 19, we see a classic bullish trend. Each High is higher than the previous one, each Low is higher than the previous one. Points 20-23 are flat. A breakdown of support conducted through 18, and a resistance test at point 25, leads to a downward trend reversal. Points 26-31 are flat, despite a false break at point 27. The downtrend ends after a breakdown of the mirror resistance drawn through points 16 and 26 and its test at point 36. From point 36, we see the development of an uptrend.

A trend reversal happens when the price is fixed above the last High (resistance) in the case of a downtrend or the last Low (support) in an uptrend. Confirmation is a resistance or support test at points 8 and 25. The retest of the punched level is a very strong signal, but this does not always happen, at point 36 the price does not reach the punched resistance. More details on how the reversal models look and how to use them in your trading you can from this article – Reversal models in the forex market.

Trend – this is the directional movement of prices from one reversal to another. Or, in other words, until you see a reversal (reversal pattern) on the chart of the currency pair, the current trend remains in effect.


A very important point, which should be addressed in the analysis of trend movement, are the levels of setting stops. As a rule, traders put stops behind swing points and transfer them along the trend movement as new turning points are formed. Thus, the trend reversal is largely connected with the closing of positions of traders trading in the opposite direction. Always think about where the stops of buyers and sellers are at the moment and you will understand the movements in the market more clearly. Removal of stops, for example sellers, tells us that there are almost no sellers, or only those who are in a loss-making position and will look for any opportunity on the kickbacks to close their positions as close as possible to the breakeven. This will give an acceleration to the uptrend.

We analyzed the trend movement on the daily chart, and how to deal with intraday trading. The approach remains unchanged. Simply impulses and corrections on the daily chart are trends in smaller timeframes. When working during the day, you always need to understand at what stage the market is on the senior timeframe. Consider the period from 1 to 8 points on the hourly chart. 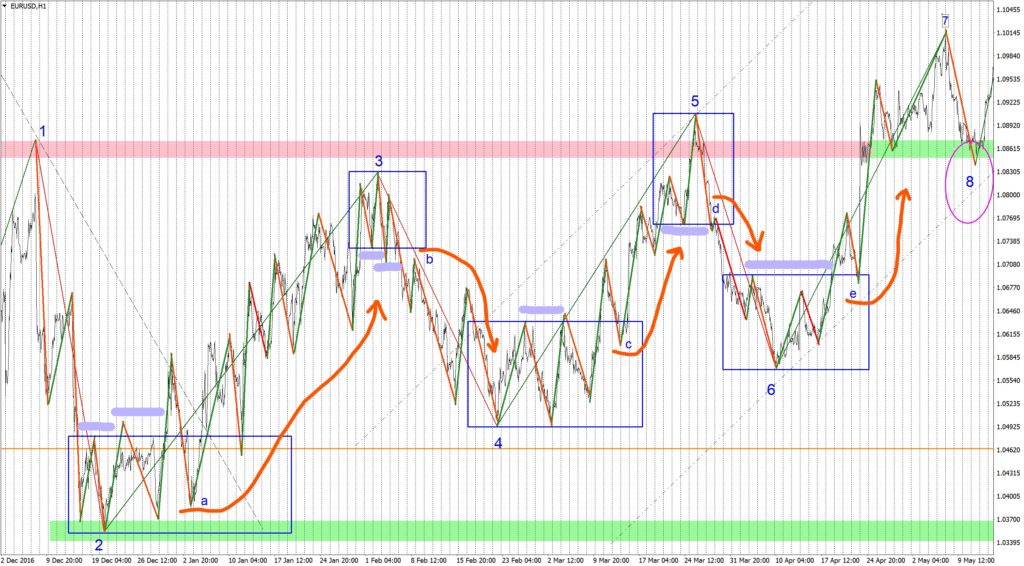 The thick lilac lines denote the probable zones of setting stops. Pay attention, the turn is always connected with the passage of the price through the stop zone. By this principle, it is possible to distinguish between false breakdowns. They do not always penetrate deep into the stop zone by the fact that traders protect these zones.
The blue rectangles are marked with reversal patterns, which are drawn by the last High and Low of the previous trend. The points a, b, c, d, e are the points of the beginning of a new trend. These are the best points for entering the trend, or the so-called non-return points. The price, having lost support or resistance by a strong impulse movement, starts a new trend without returning more to this point. We see a downward momentum from point 1 to 2. In the reversal model near point 2, I singled out the beginning of a new trend at point a, since the previous upward momentum took out sellers’ stops. But you can use the next Low as more obvious. As you can see the rule of repeating higher High and Low for an uptrend (and vice versa for a downtrend) works fine on an hourly timeframe. It can be used on a 5-minute timeframe, but there will be much more market noise.

It is very important for the trend trading to keep track of the information background. After all, price movements in one direction or another are determined by the expectations of traders and their estimates of the future value of the currency. The reaction of traders to outgoing news may indicate the prevailing sentiment in the market. As a rule, in the trend movement, positive news for a particular currency is recouped actively in the direction of the trend, negative news can lead to correction or consolidation. Correction in this case is used by traders to enter the trend at the best price or increase their positions. This is one of the main properties of trend movement. Remember, if there is a trend in the market, the corrections are redeemed to enter the trend or build up the position.If the news is not very good, and the currency starts moving against the news, this is an additional strong confirmation signal about the strength of the current trend.

What additional ways to confirm the trend we can use. First of all, these are trend lines, channels and trend indicators. Remember, channels and trend lines, as well as levels of support and resistance – these are the only indicators aimed at the future. Only they can with a certain probability prompt where correction can begin (as in the case with the culmination), where it can end, what goals within the current timeframe really put. From trend indicators, I use simple averages, as the most popular indicator. Let’s put the indicators on the chart. 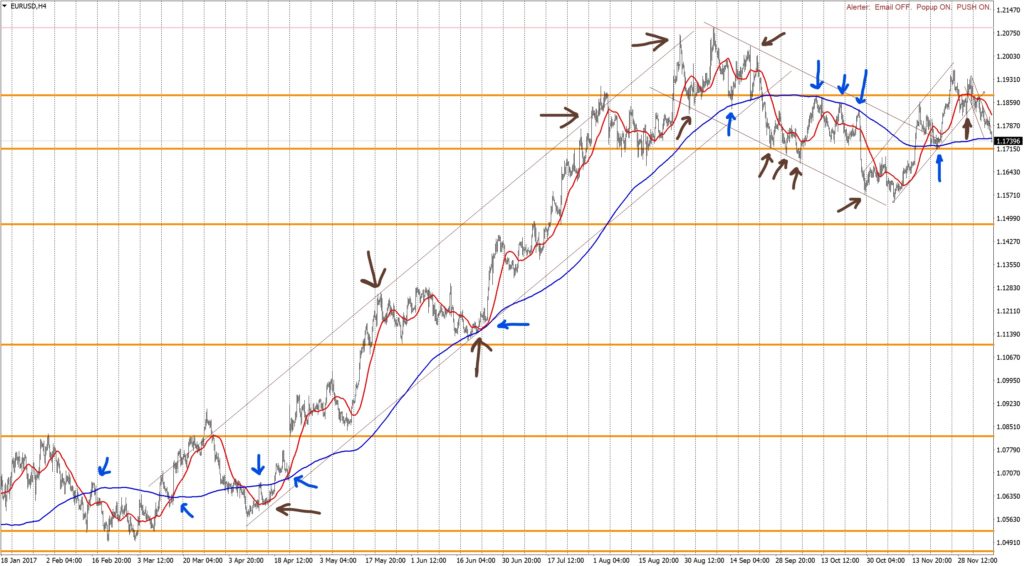 The chart shows 100 H1 SMA and 200 H4 SMA (which medium indicator to use for different timeframes read here). The boundaries of the channel are used as inclined lines of support and resistance (brown arrows). Finding a fast 100 H1 SMA above a slow 200 N4 SMA confirms the strength of the bullish trend.

The price also interacts with 200 H4 SMA using it either as support, as resistance (blue arrows). Exiting the channel usually leads to a trend change. However, do not use the averages as signals to open deals, they are very late, especially on large timeframes.

Based on the studied structure of the trend movement, it is possible to formulate some trade recommendations.
1. Understanding the structure of price movement in the trend allows you to successfully trade Forex without using technical indicators.
2. The trend begins with a reversal and ends with a turn. While there is no reversal model – the trend remains in force. In other words, a trend is a directed movement of prices from a reversal to a reversal.
3. The reversal of the trend points (High and Low) can be identified only after the trend reversal occurred or on the history, so never wait and do not catch the trend reversal.
4. It is necessary to always follow the direction of the trend on the senior timeframe. When trading within a day, it is advisable to open deals in the direction of the trend on the senior timeframe.
5. When trading out the correction of the trend, it is necessary to reduce the level of risk and move the stops as quickly as possible into a breakeven. In the case of an impulse in the direction of the trend, you must be ready at any time to reverse the position.
6. Corrections in the trend are used by traders to enter the trend or increase the size of the position. In this case, a turn after correction may occur at any time. Use this in your trading.
7. Always determine and consider in the trading areas of stopping by traders.
8. The retests of the punched levels are very strong signals and allow you to enter a new trend at the point of no return.
9. Never get discouraged if you miss an impulse and a good entry point. Rollbacks are always and you will have another chance to enter a new trend.
10. To confirm the strength of the current trend on the market, it is necessary to monitor the news background and monitor the sentiments of traders.
11. Channels, trend lines and moving averages can be used to analyze the trend and determine its turns.
12. As forex trading occurs on the right side of the chart, your profits are in the future and you can not manage them. It is possible to manage only losses, limiting them by staging stops and transferring them to lossless. Do not forget to put stops.

Watch the movements of the price taking into account the structure of the trend movement and use common sense – these are your best assistants for understanding what is happening in the market. Technical means should help you, and not complicate the analysis. And do not forget the Golden Rules of the Forex.