Triangle is a quite common technical figure on Forex. Traders need to know how to open positions in the triangle with the least risk. 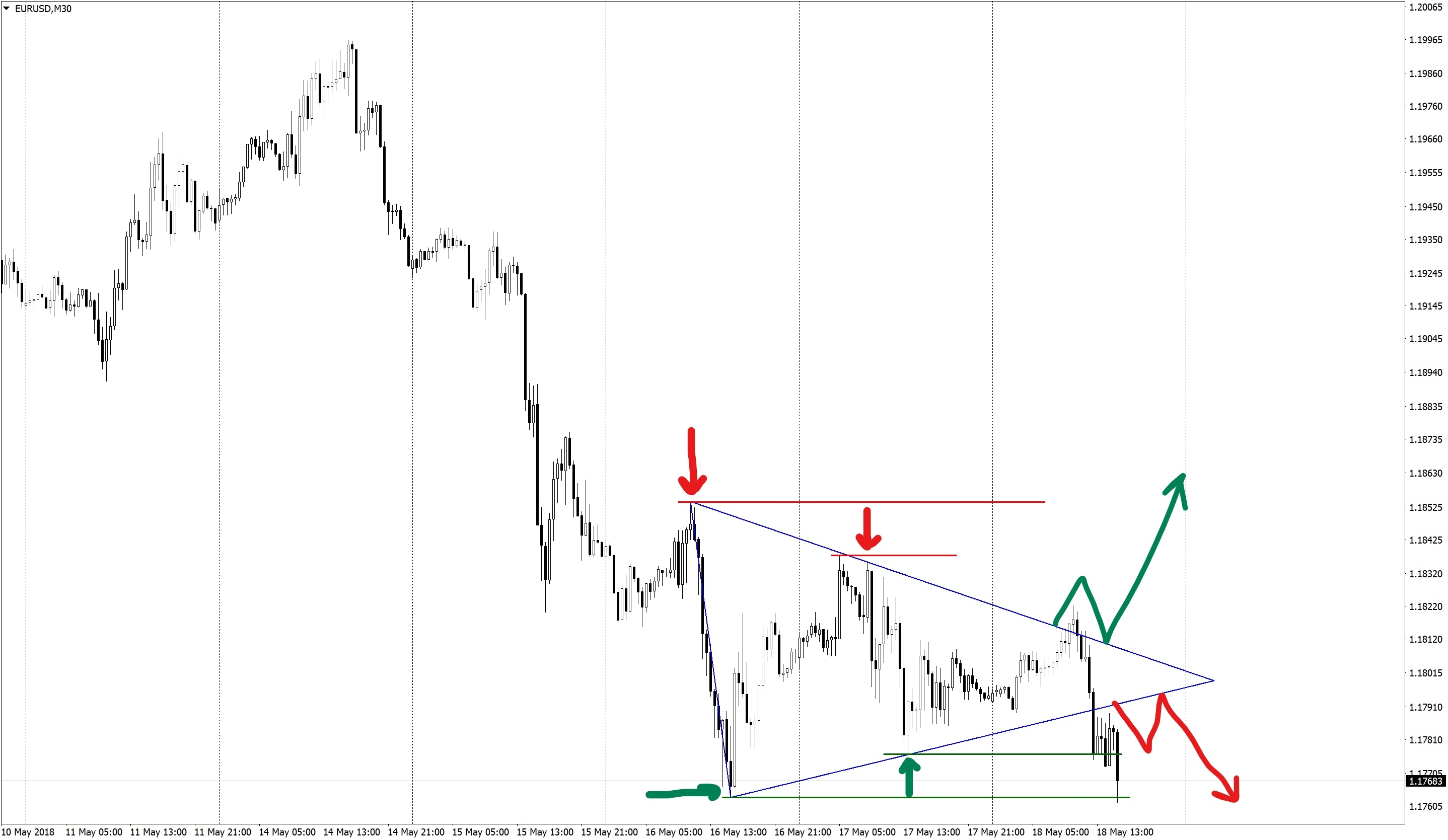 The technical figure Triangle and the principles of working with it are described in detail in the article “Figure of the technical analysis Triangle – use on a Forex”. In this article I will describe in detail the scheme of actions for the opening of trading positions in this technical figure on a real example.

And especially in detail we will dwell on the situation of false breakdown of one of the sides of the triangle as the most complicated case.

The figure of the triangle is essentially two inclined lines of the trend. The price is consolidated inside the figure, as if squeezing into a spring. And at some point the price should go beyond the boundaries of the technical figure.

In the chart above you see a triangle on the EURUSD pair, which arose as a result of the formation of the inside bar on the daily chart. Green and red short arrows indicate the points along which the triangle is drawn.

But it is not always so simple. Quite often there is a situation of false breakdown at the price of the triangle’s border and the return of the price inside the figure. It was this situation that took place a few days ago on the EURUSD currency pair and I decided to disassemble it in more detail.

On the upper chart, we see how the price broke through the upper limit of the triangle and rolled back to it. At that time, we could only expect further upward movement. Therefore, the Buy deal opens in this situation on rollback.

Given that in the breakdown of a triangle, further movement can occur with good acceleration, so as not to miss the rollback and the best entry point, it is desirable to practice the figure on a smaller timeframe – M5 or you can drop even to M1. Let’s see how the situation developed on the M5. 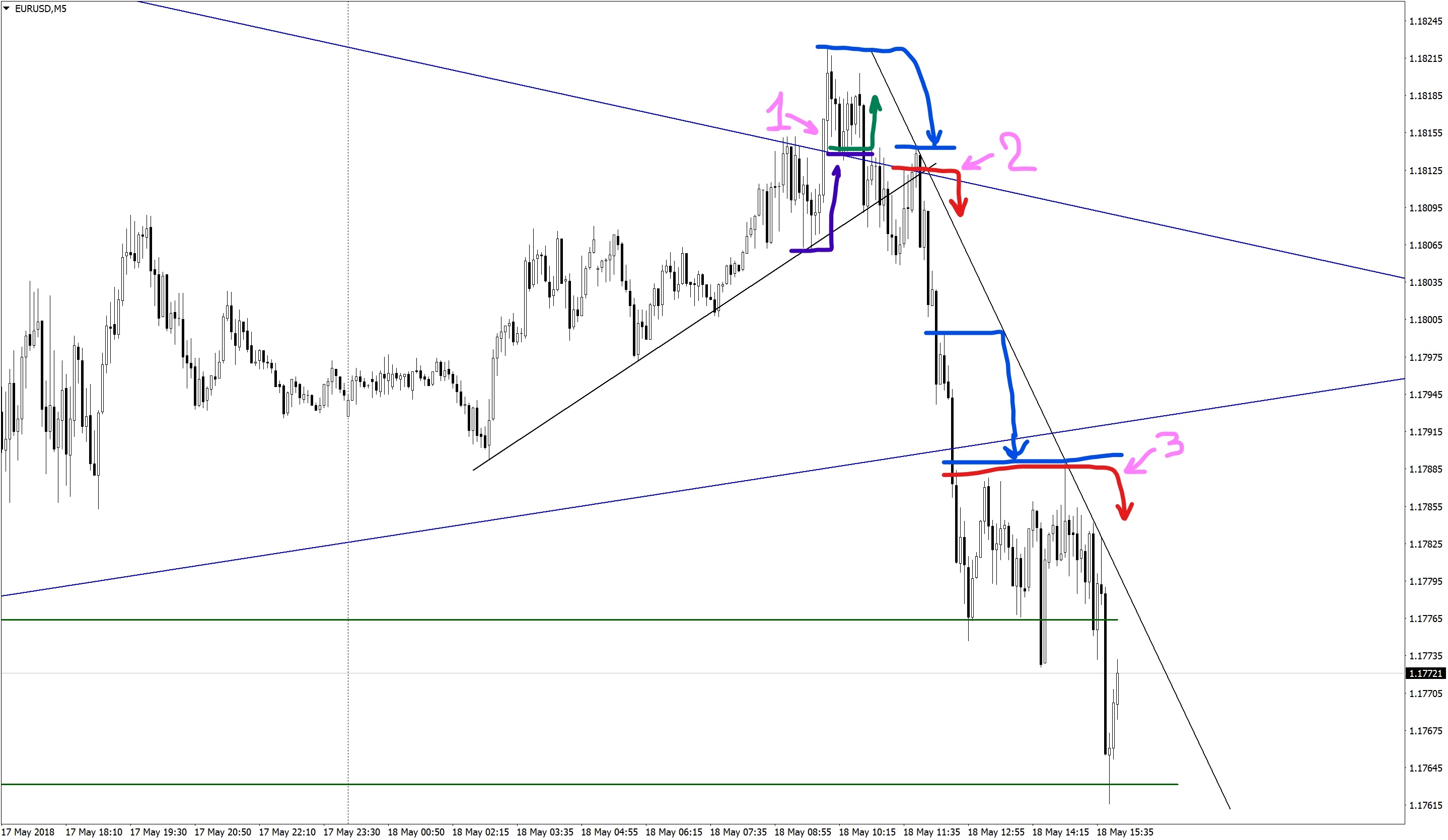 The first Buy deal is opened after the price is rolled back at the breakdown of the top face of the triangle (green arrow with the number 1). Initially, a stop order is placed for the last Low of the price – on the chart it is shown with a purple arrow. And here is the most important moment. If the situation develops correctly, then we expect the price to accelerate after a rollback and move it above the last High. Therefore, the stop-loss order must be moved as close as possible to the open position and if there is an opportunity to put it in a breakeven.

The technical figure of the triangle is very clear and even if traders do not see the triangle itself, then the inclined resistance line is seen by practically all traders, regardless of the types of trading terminals or platforms. And for all traders, the pullback of the price to the broken trend line will be a good opportunity to enter the market, which should give an additional acceleration to the price in the direction of breakdown.

And if this does not happen, then something is wrong. The strength of the bulls in our case is not enough for the upward momentum. And so do not be afraid of a closed stop-loss order transferred to lossless. Especially if you see that the price can not make a new high. As in the example above. The price 25 minutes could not reach the last maximum after a rollback – it’s 5 candles for 5 minutes. And after that I flew down. Moved close to the price of the stop-loss order will make your situation win-win.

In order to further control the price movement in the triangle, I recommend using trend lines on small timeframes. This will catch the turn of the movement at an early stage.

If the price goes back inside the triangle, then this situation becomes analogous to a false breakdown of the technical level. We begin to wait for retest of the verge of the triangle from the back side and should be ready to open a reverse deal. Since any false breakdown is a strong signal to open the opposite position.

In our example, the Sell position opens at point 2 when retrying the upper border of the triangle from the back. The initial stop is also placed at the last High and also quickly transferred as close as possible to the open position or break-even. In the second case, we see 4 candles that tested the side of the triangle from the inside, but the price went down one powerful candle and did not return.

We were waiting for the similar scenario when opening the first Buy position. Most of the triangles that I observed on different currency pairs have exactly the same properties of interaction with the price. Price or immediately after the retest of the broken face goes in the right direction, or starts to bargain and this means that it is likely to unfold. And it is this that makes it very easy to move stops into a breakeven. As a rule, the price at the exit from the triangle always gives such an opportunity.

After the second Sell deal, the price accelerates the body of the triangle and punches the bottom face. On this downward impulse, after a breakdown of the bottom face, there is a small price rollback, it does not reach the bottom edge, but also allows to enter the movement down at point 3. The price rolls back to this point and tests it several times, but even if the stop order It was moved fairly close to the open position, it would not be closed. After correction, the price continued its decline in the direction of the second breakdown of the triangle.

I gave just this example, because such situations happen very often and you need to have a clear sequence of actions when working out a triangle in order to catch the necessary momentum of the price.

Let’s once again analyze the situation with a false breakdown of the face on an even smaller timeframe – 1 minute, this is a very typical situation for any triangles. 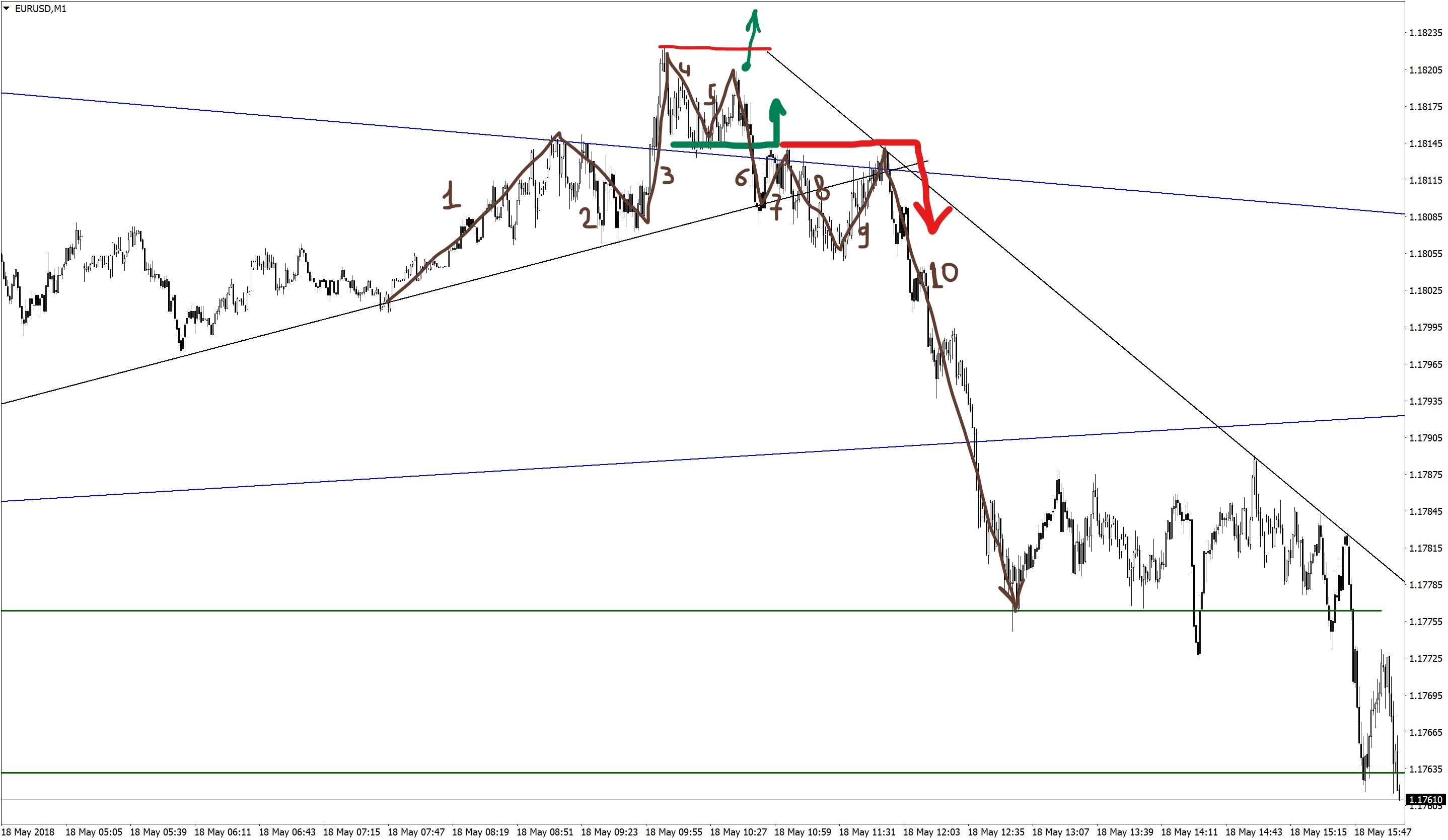 Impulse 1 tests the top face of the triangle, 2 – rollback, 3 – pulse punches the face of the triangle up. After rollback 4, the situation arises for the opening of the Buy deal. The price goes in the direction of breakdown – 5. On this impulse, the stop-loss order must be moved close to the price or in breakeven. The price can not make a new high. The strength of the bulls is not enough. The return impulse 6 returns the price inside the triangle. Stop-loss is triggered. Rollback 7 – the first test of the top face of the triangle from the inside. And the first opportunity to open a Sell order with the stop at the maximum price formed by the movements 3 and 4. Movement down 8, the second retest of the triangle’s face 9. And here is the second opportunity to open the Sell deal. Powerful impulse down 10. After leaving the price below the last low (8-9), the stop-loss order is transferred to a breakeven. If you close the deal at the end of the impulse 10, then the deal would bring 370 pips. In principle, not bad for a technical figure triangle on 5-min. chart.

When you open a Sell transaction after breaking the lower bound and rolling back the price to it (position 3 on the previous chart), then such a deal would bring about 380 pips. But let’s see what ended the movement down after the breakdown of the triangle. 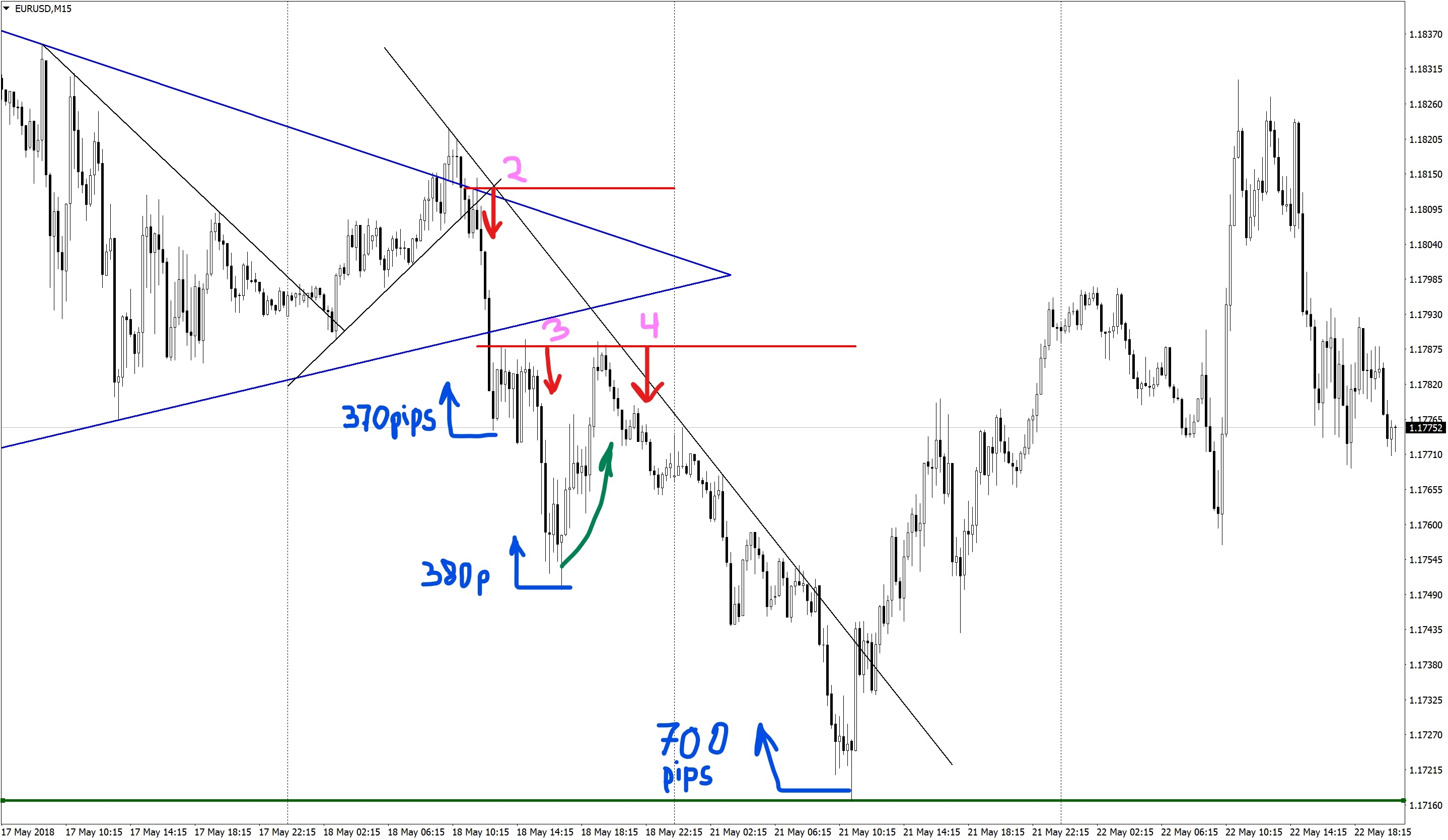 The price rolls back to point 3 (green arrow up). If it were not to fix the profit after the deals 2 and 3, then it would be a little scary. But the most stable traders of the currency market bring a gift – the price again continues to decline the next day, and this movement would bring about 700 pips. If we stayed from deal 2 to deal 4 (and the stop-loss stay in our break-even), the total revenue would be about 1000 pips. Very good deal in my opinion.

And again, when controlling open deals in triangles, trend lines are a very useful tool.

Where to set goals is a separate serious issue and not only with respect to the technical figure of the triangle. In our case, the price of the currency pair EURUSD at the very bottom bounced off a very strong mirror level, which you can read about in the article “The growth of the US dollar on forex -ahead a strong resistance“. In any case, pay attention to the strong levels and about them make decisions about closing or partial closing of transactions.

The goals of fixing profits on deals when working out a technical figure of a triangle are very much dependent on the timeframe on which the technical figure was formed. The older timeframe, the longer the movement can be expected after the price out of the triangle. For example, the movement in the breakdown of a triangle on the same pair, formed on the daytime timeframe, led to a reversal of the trend and continues to this day. Look about it in the article – “Triangle on EURUSD – continuation of a trend or reversal?“.

Not very often, but there are situations with double false breakdown of the sides of the triangle. On the hourly chart of the USDCAD pair, the triangle was formed as a result of the formation of the inside bar. The boundaries of the triangle are drawn along the blue dots. 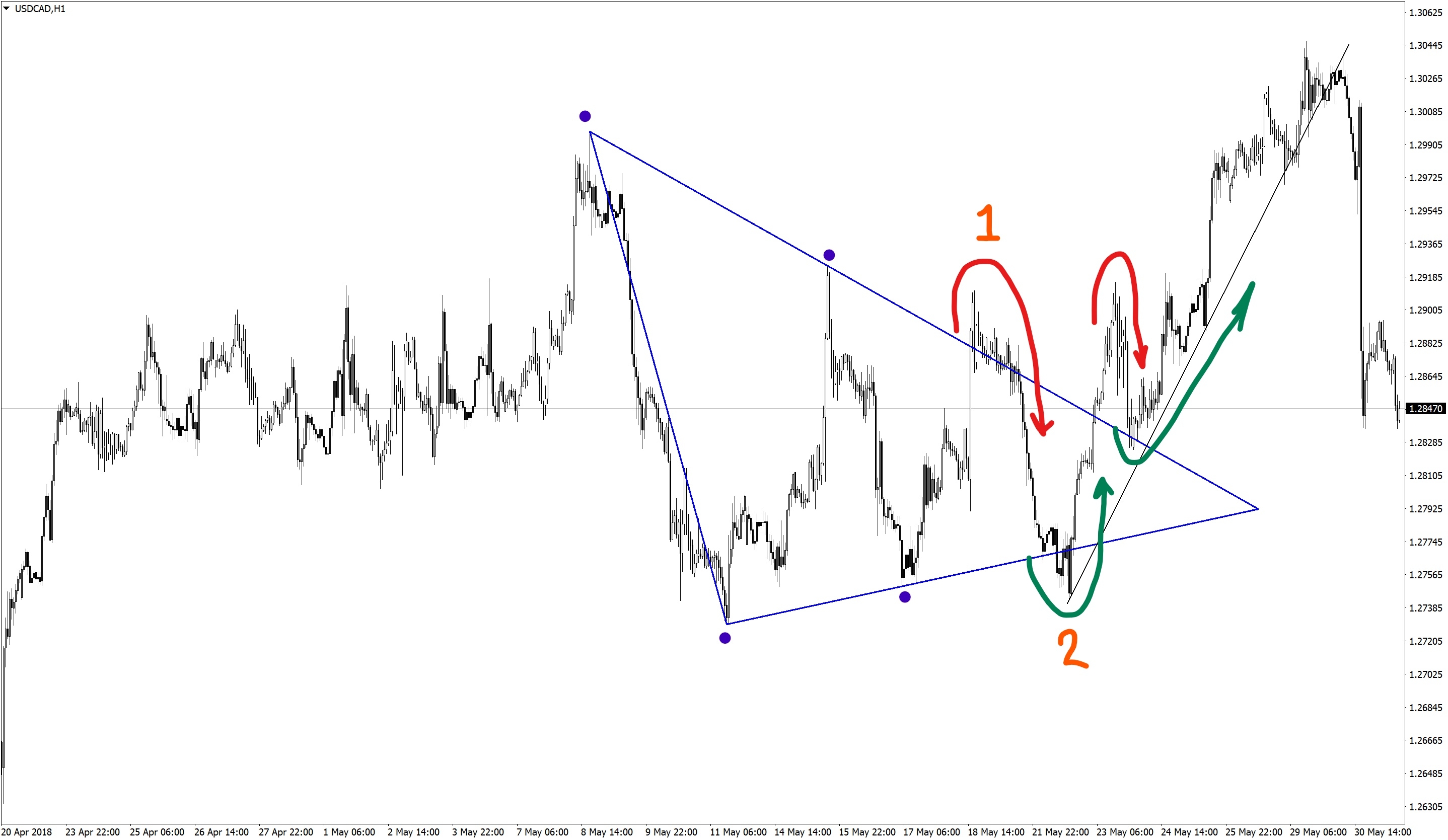 The first attempt to get out of the triangle led to a false breakdown and the movement of the pair to the lower boundary (No. 1). The breakdown of the lower boundary also turned out to be false and the pair turned up confidently breaking the upper bound (No. 2). Correction of the price to the top of the triangle would be an excellent entry of Buy into the market. The movement up after the retest was about 2000 pips.

Love the triangles on Forex. Study them and they will bring you good money.