MACD (Moving Average Convergence Divergence) is an indicator used in technical analysis to evaluate and predict price fluctuations in all financial markets, including Forex. 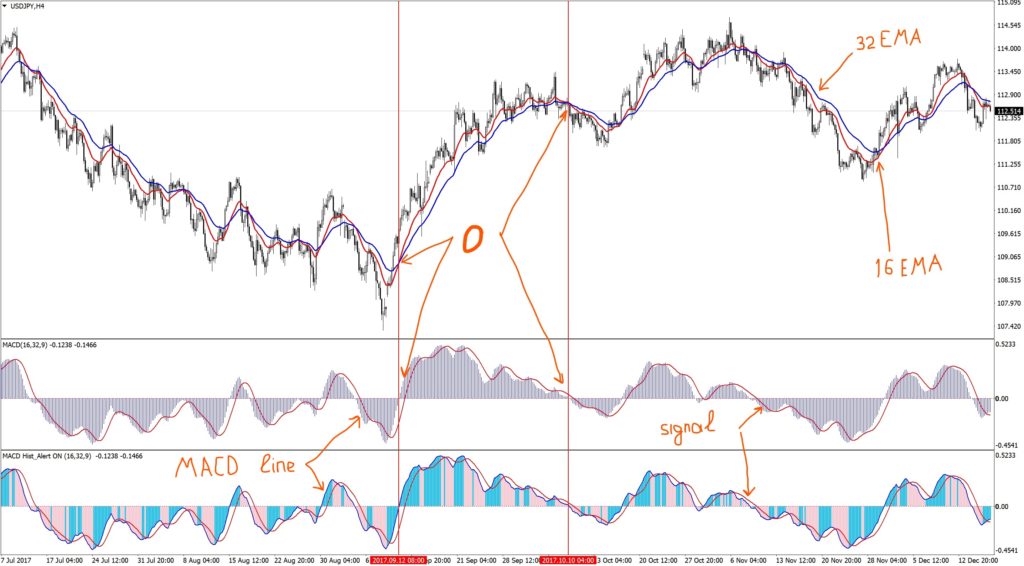 Although the MACD indicator goes into the standard set of MT4 terminal indicators, I recommend using a more advanced version of the indicator – MACD Color Hist Alert. The advantage of this indicator is more complete settings, it reflects the MACD line, and also has audible notifications when crossing the MACD line with the signal line and the zero line. Download the indicator you can follow the link at the end of the article.
For comparison, we plot the pair USDJPY H4 with two indicators with parameters 16-32-9 – standard (top) and MACD Color Hist Alert. To understand the indicator’s performance, the price chart also shows exponential moving averages with periods of 16 (red) and 32 (blue). How to reflect on the chart moving averages from different timeframes you can read in this article.

Accordingly, when the fast EMA is higher than the slow one, the MACD (or histogram) line is positive and is located above zero. Its value indicates how fast the line is farther (higher) from the slow one. When the fast EMA is lower than the slow one, the histogram is negative and its value indicates how fast the EMA is (further) from the slower. At the intersection point of moving averages, the difference between them is zero, and accordingly the MACD line also intersects the zero line of the indicator (in the chart, the red vertical lines). Thus, the indicator clearly demonstrates to us the reduction in distance and the convergence of the two moving averages, as if warning of their imminent intersection and a reversal of the trend.

On the Internet, a lot of information about the standard signals of the MACD indicator for opening transactions. However, I would like to remind you that, like any technical indicator, MACD signals are considerably late and quite often erroneous. A lot of tests were conducted with the opening of deals on the standard signals of this indicator and they showed slightly more than 50% of the positive results. So how do we tip the probability on our side?
Let’s take a different look at the work of MACD and we will be able to use some of its features very useful in constructing a profitable trading strategy.

First of all, it is necessary to clearly understand that using the indicator on the older timeframe gives significantly fewer errors due to the filtering of market noise. I would recommend using MACD on the H4 timeframe. One of the main advantages of MACD is that it combines the elements of both the oscillator and the trend indicator in one indicator. Another advantage is that it is more visible in better than other indicators, reveals divergences and price convergence.
Recall that divergence is the divergence of the indicator’s direction and price chart in such a way that the higher maximum price is not confirmed by a higher maximum on the MACD (bearish divergence) indicator or vice versa, the lower minimum is not supported by a minimum on the indicator (bullish divergence). Divergence is the signal of a possible reversal or price correction. Convergence, respectively, is the opposite – it is a signal of a possible continuation of the trend, which is a discrepancy between the indications of the indicator and the direction of the price movement.

Let’s concentrate on these two advantages of the indicator and to show them the trend lines and another indicator of automatic divergence search – FX5 MACD DIVERGENCE. This indicator builds a divergence line between the current price and the MACD, and also gives signals to buy or sell by displaying the green and red arrows. There is a built-in alert function. Bullish divergence is indicated by green lines, bearish – red. If the divergence is classical, the line on the price chart will be solid, and if the type is reversal, the line will be dotted. Download indicators you can follow the link at the end of the article. Let’s see how it will look on the same chart. For clarity, I hid the signal line on the MACD Color Hist Alert indicator.

As we can see, the intersection of the MACD line with the trend line gives significantly earlier and qualitative signals about the trend change than the intersection with the zero level (vertical blue lines on the graph). This approach fully discloses MACD as a trend indicator. Indicator FX5 MACD DIVERGENCE also quite correctly determines the divergence, but we must always remember that not the price follows the signals of the indicator, but vice versa. And it is necessary to recheck these signals, including divergence signals, for compliance with your trading strategy and the rules of opening deals. In other words, every signal of the indicator’s divergence before the opening of the trade must be checked very carefully for the correctness of its formation. The FX5 MACD DIVERGENCE indicator reflects on the chart the prices of the lines connecting High or Low over which it calculated the divergence. Signals are calculated mathematically and do not take into account anything other than prices in numerical terms. Your task is to correctly interpret the signals of the indicator and to filter out the mistakes.To filter transactions, you need to add a rule for opening deals only in the direction of the trend movement, which will be confirmed by finding the MACD line above or below zero. And we have a practically complete trading strategy in the foreign exchange market.

It should be noted a very interesting trend associated with the use of the indicator MACD to assess the divergence through trend lines. After crossing the MACD indicator line with its trend line, the price very often makes a new minimum or maximum in the direction of the previous trend (or tests the previous one), but only after that the price turns. At the time of the formation of a new min. or max. price indicator and forms a divergence signal. Let’s look at the example of the Canadian dollar on H4. 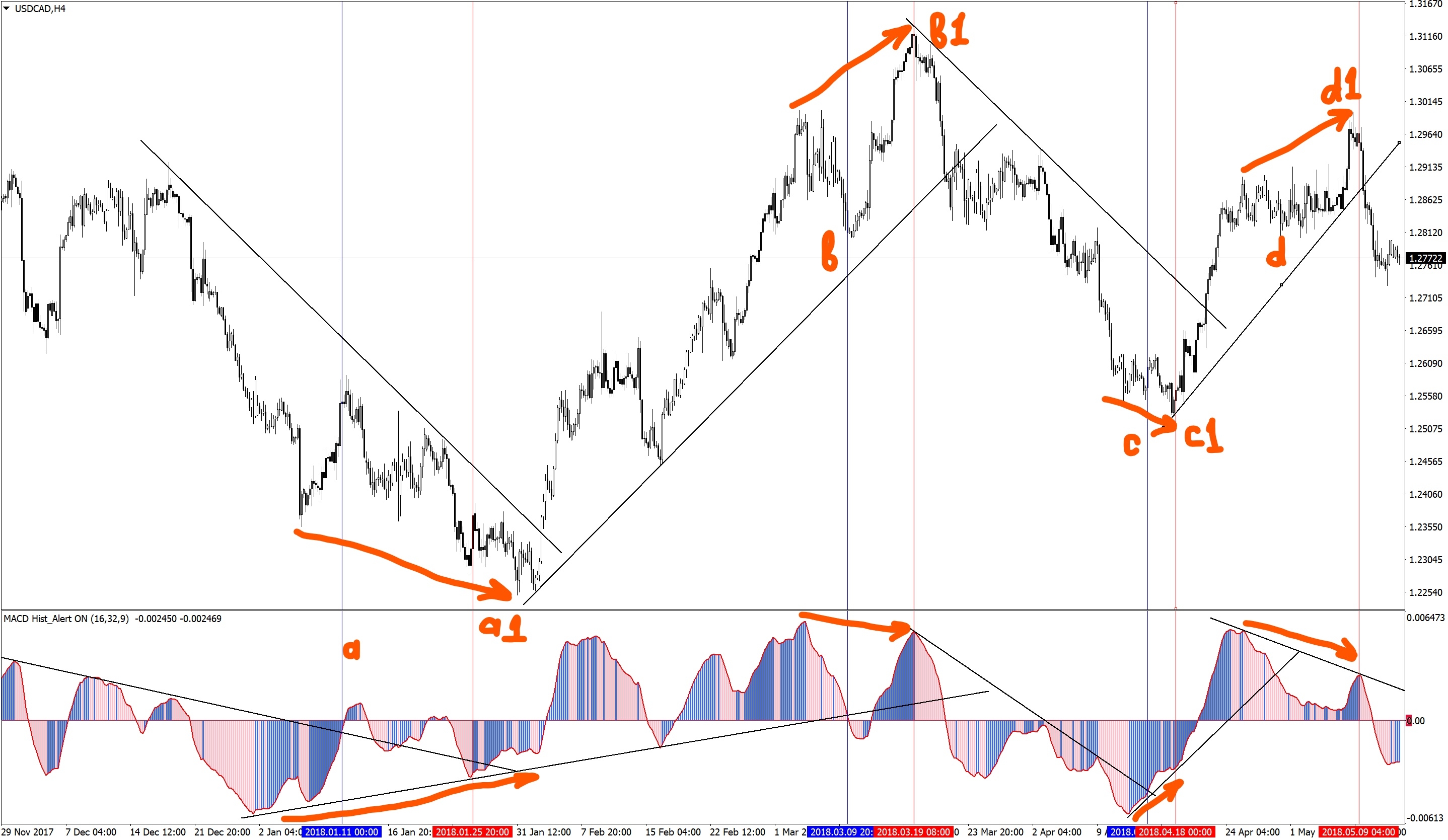 The MACD line crosses its trend line at points a, b, c, d. On the graph this is indicated by blue vertical lines (except for the point d – missed). But despite the fact that the indicator MACD after this crossing changes its direction, we see that the price itself makes a new minimum or maximum in the continuation of the trend. And already after this new High or Low, marked on the chart a1, b1, c1, d1, we get a strong divergence signal and then the trend turns to the opposite. The divergence in the chart is indicated by the orange arrows on the indicator and the graph respectively. And this specific behavior of the indicator MACD is present in almost all currency pairs.

How can we use this in forex trading? First of all, after crossing the MACD line with its trend line, we are waiting for the trend to continue, not a reversal. And the momentum in the continuation of the trend can be very strong. At the same time, we are waiting for a trend reversal to occur at the next minimum or maximum of the price. What should be confirmed by the formation of the divergence signal on the MACD indicator. It is advisable to control the reversal using simple trend lines on the price chart itself. Understanding this specifics gives us an opportunity to determine the trend reversals with a high probability and enter a new movement in its very beginning.

In conclusion, it can be noted that the competent use of such a popular MACD indicator, taking into account the principles of trend movement in the trading strategy, makes it possible to increase the accuracy of forecasting the direction of price movement of the currency pair and the quality of signals for opening positions in the Forex market.

You can download the indicators by the archive from the following link:
MACD-FXTAA

(3 ratings, average: 5.00 из 5)
Leave comments. Ask questions. Subscribe to the newsletter on the main page of the FXTAA.com and you will be the first to learn about the release of new materials on our site.