The next trading week ended in the forex market by forming on the EURUSD currency pair a well-known technical set-up “inside bar” and this is an excellent opportunity to study and check the known Price Action setup in a real situation.
On the daily chart, you see this last candle at number 9. 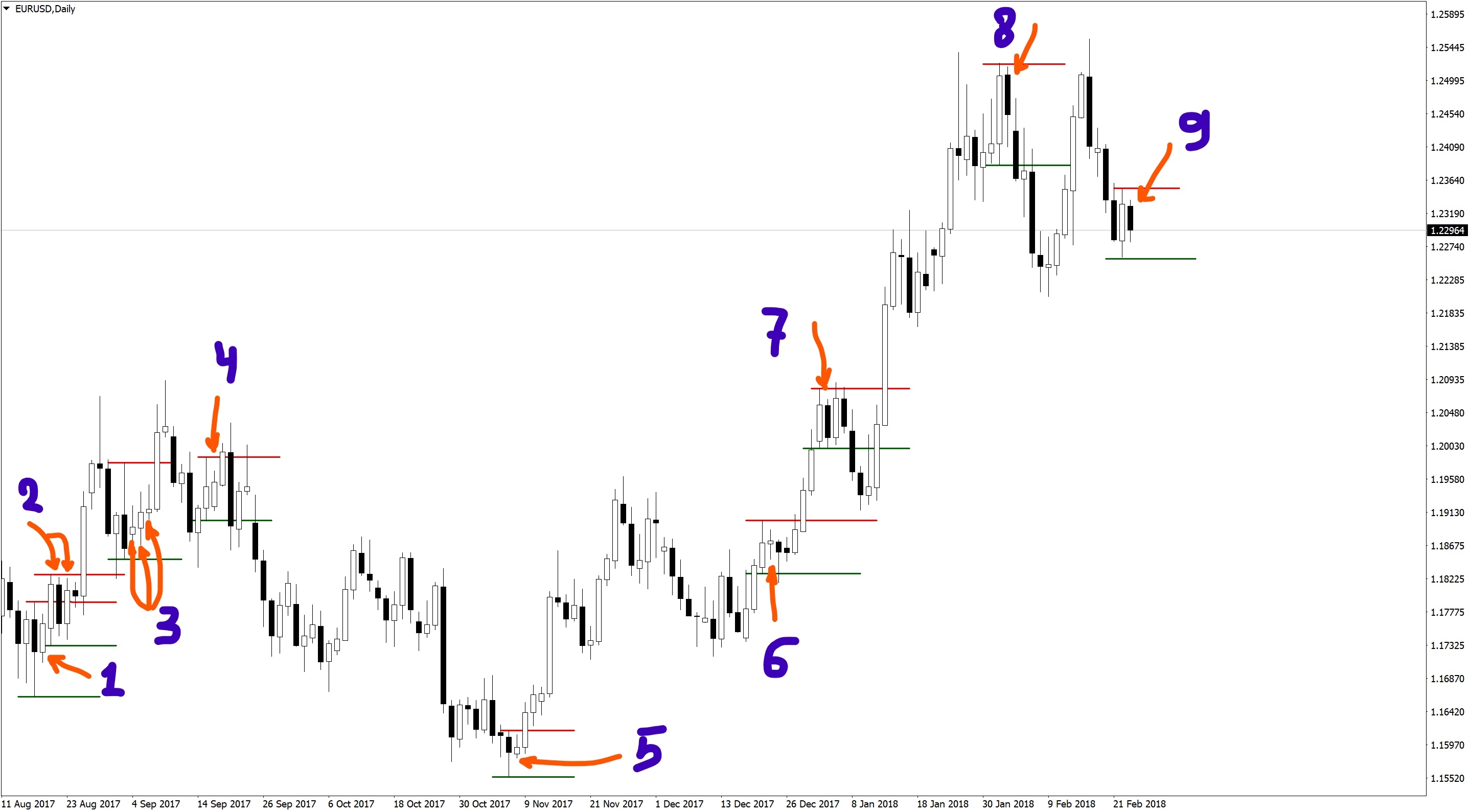 For comparison and objective analysis, I identified on the chart all the inside candles and numbered them from 1 to 9.

The inside bar is a candle on the chart, the minimum and maximum value of which is located in the range of the previous candle on the chart. A candle, within the boundaries of which an inner candle is formed, is called a mother candle. The inside bar in theory is considered a very strong setup in Price Action and indicates the uncertainty of traders and the consolidation of the market. After that, as a rule, there is a very active movement in the market.

In accordance with the theory of Price Action, an intside bar is considered a breakout setup. That is, it is recommended to open transactions at the breakdown of the boundaries of the mother or inside candle. 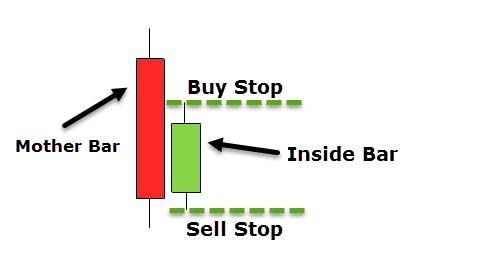 Very often the inside bar on the senior timeframe is formed in the form of a technical figure triangle on the younger timeframe. And this fact helps to analyze the situation more qualitatively. Let’s look at the last inner bar number 9 on the M30. 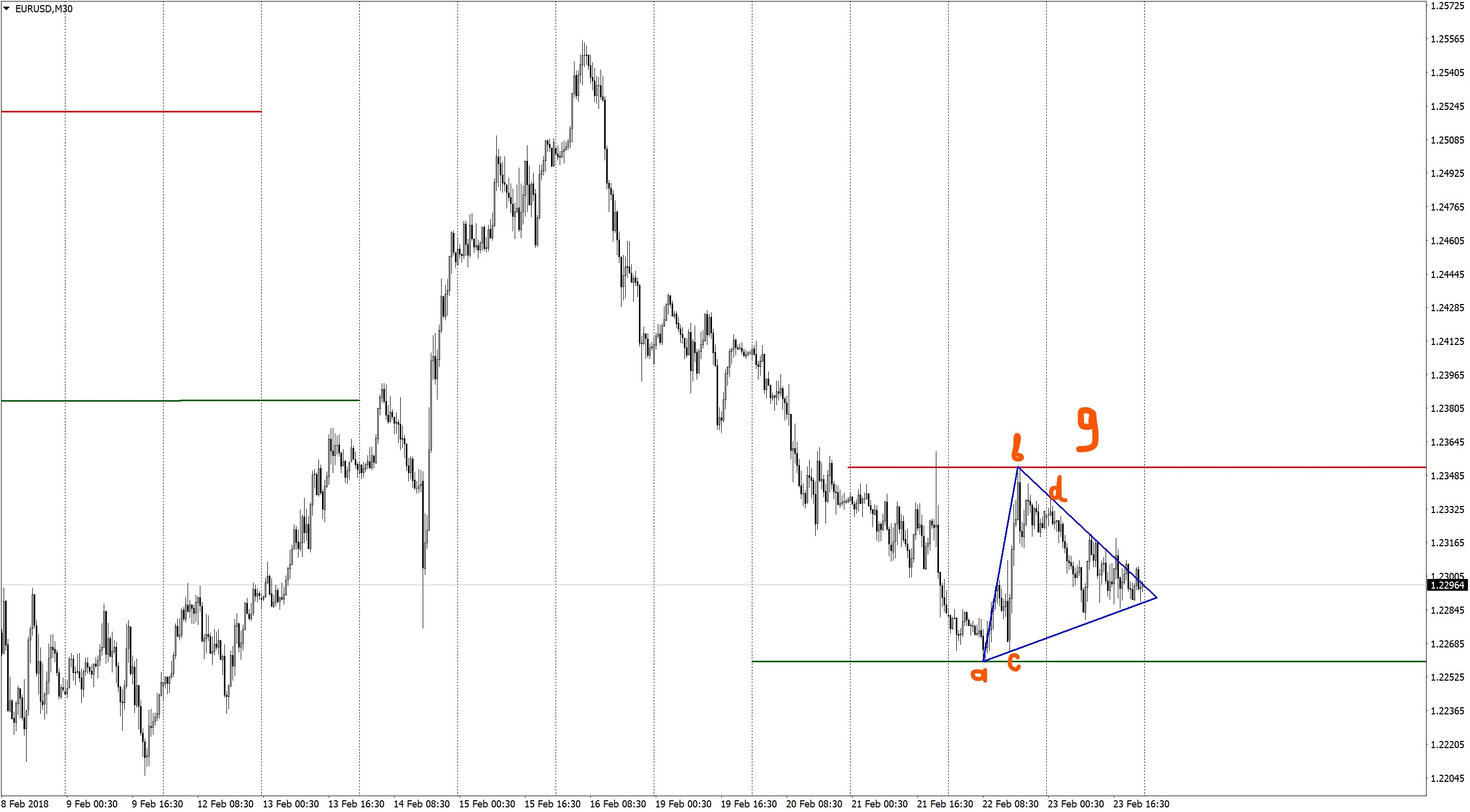 The mother bar is formed by the line a-b. Accordingly, the triangle is drawn on the points a-b-c-d. This approach to analysis allows you to find significantly more accurate entry points based on the analysis of the technical figure of the triangle.

Let’s analyze the inside bar number 8 on the daily chart. 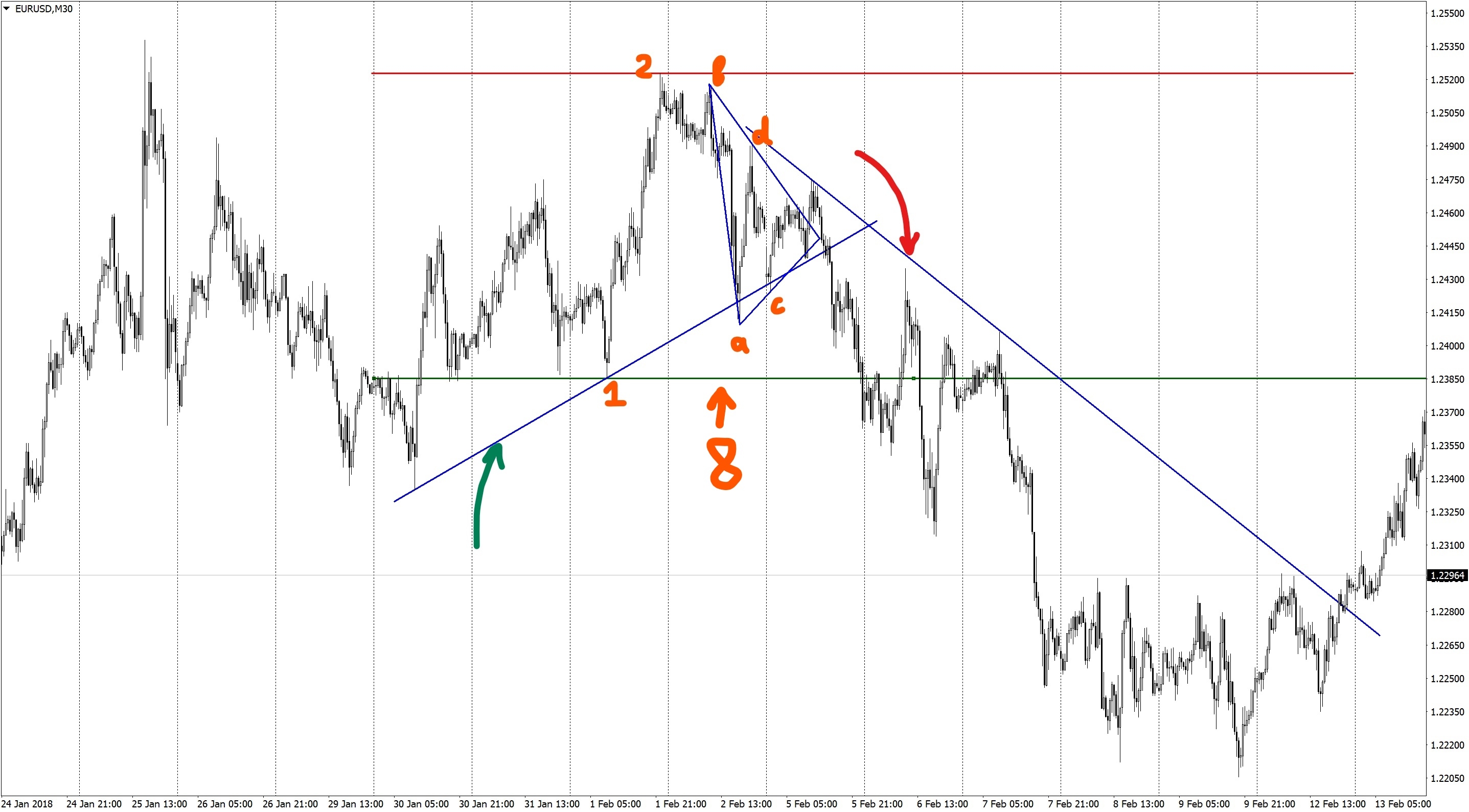 The mother candle is formed at points 1-2. The next day an inside bar and a triangle shape are formed along the points a-b-c-d. The first exit from the triangle up was false, and then began an active downward movement. And the entrance to the market turns out much earlier if you analyze the triangle and the breakdown of the boundaries of the inside bar, and not the mother candle. In addition, inclined trend lines help in the analysis. It is seen that the triangle is formed on an upward trend line and its breakdown gives rise to a decrease in the EURUSD pair.

And now let’s see how the story ended with our last inside bar number 9. I had to wait two days. 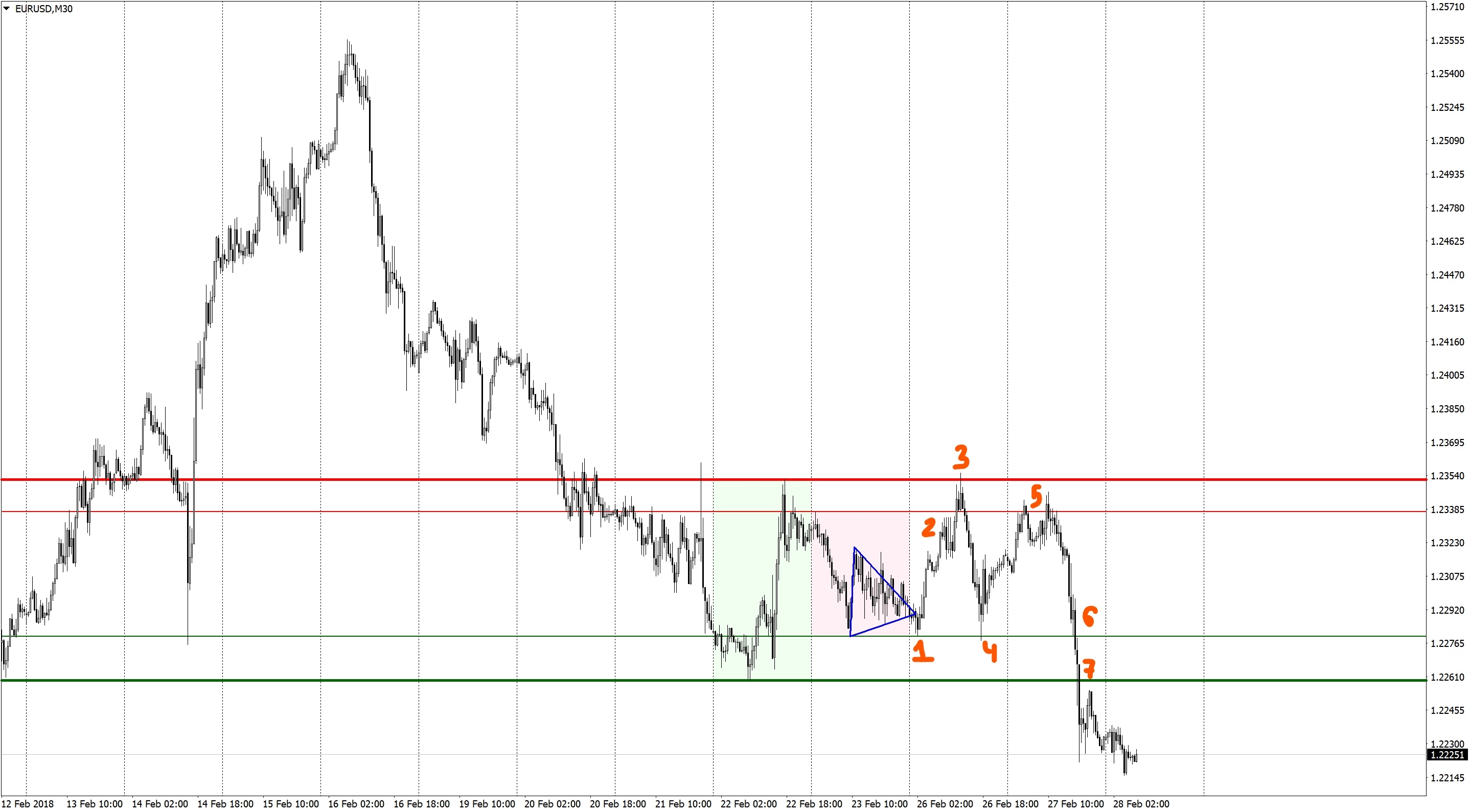 As in the previous example, the first exit from the triangle turned out to be false, but after the rebound from support, one could enter into a good movement with a clear goal at the resistance. This deal could bring 50-60 points. The entrance to the breakdown of the resistance of the inside bar at point 2 would not bring us a good deal. The price broke off from the resistance of the mother bar at point 3 and dropped to support at point 4. So the next day ended with the formation of another inside bar.

The next day, the pair again tested the resistance at point 5. And began to decline actively to support. Now in history, we can already say that the market was waiting for important news. In our case, this was the first speech of the new chairman of the Fed, Jerome Powell, before the US Senate Finance Committee with a six-month report on monetary policy. The publication of the protocol and the speech of the Fed Chairman led to an increased demand for US dollars. On this pair, EURUSD broke through the support of the inside and the mother bar at points 6 and 7 and fell to the next support. The breakdown of the mother bar at point 7 was confirmed by retest of the pierced level. However, the entrance to the breakdown of both the inside bar and the mother bar in this case would also not be the best deal in our case. The optimal strategy for the entire consolidation period would be to work from support and resistance lines.

What conclusions can be drawn from an analysis of this situation.

Almost all the analytical materials on the Internet about the inside bar say that this is a strong setup and gives good results when entering the breakdown of the bar and placing the stop behind the opposite border of the bar. After studying the analysis of the situations described in this article, you should have realized that everything is not so beautiful and cloudless in the real market. In my opinion, in modern conditions this setup does not work, as well as classic reversal figures in the forex market.

On the other hand, my analysis confirms the fact that such simple techniques as support-resistance levels work fine in many difficult situations. In general, the forex market works very simply. Large players place purchase orders – in these areas there is support. So where they place sale orders – there is resistance. And do not complicate the existing situation in the market and come up with complex setups. You just need to buy from supports and sell from resistance.

(1 ratings, average: 5.00 из 5)
Leave comments. Ask questions. Subscribe to the newsletter on the main page of the FXTAA.com and you will be the first to learn about the release of new materials on our site.
Be prudent, observe risk management and trade in a plus.
SUBSCRIBE TO OUR NEW ARTICLES
(Visited 396 times, 1 visits today)