As we know, the Fed’s actions to regulate monetary policy are based on the so-called “double mandate” – ensuring maximum employment, stable prices and moderate long-term interest rates. And expectations of changes in interest rates in turn are the main driver of the forex market. 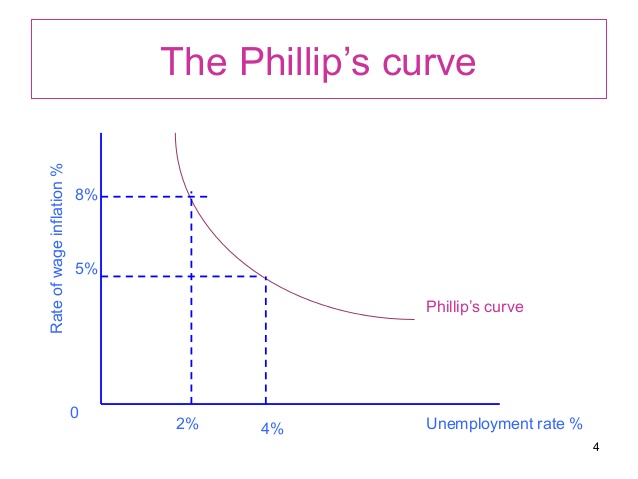 One of the main models used in making a decision to change the level of interest rates is the “Phillips Curve“. This model is actively used by central banks of all developed countries.

The Phillips curve is a curve showing the interdependence between unemployment and wage inflation. In the short-term period between the level of inflation and the unemployment rate, there is an inverse relationship: an increase in employment leads to inflation, since when resources are scarce, their “enticement” begins by raising wages and prices for investment goods. The economic recession causes a reduction in employment and aggregate demand, which leads to disinflation or even to deflation.

English economist Olban Phillips in 1958 published the results of his studies, according to which between the percentage change in nominal wages and the unemployment rate in England for the period from 1861 to 1913 y / y. there was an inverse relationship. Further studies conducted, in particular, by P. Samuelson and R. Solow, made it possible to clarify the dependence discovered by O. Phillips, replacing the nominal wage factor by the inflation rate. The fact is that the share of nominal wages in some cases reaches 3/4 of the costs, so the direction of their dynamics coincides. Despite the significant improvements made by P. Samuelson and R. Solow, the curve, reflecting the inverse relationship between the level of inflation and the unemployment rate, was called the Phillips curve. 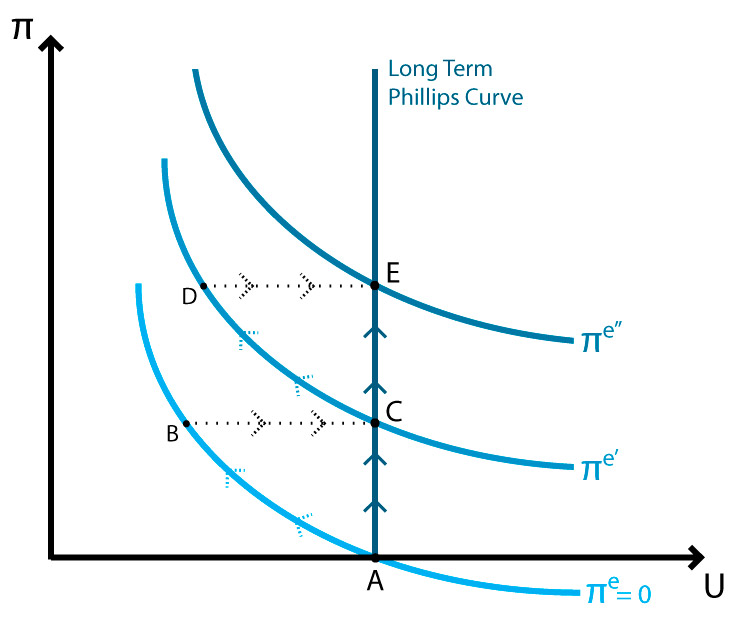 The Phillips curve shows the interdependence between unemployment and inflation in the short term. Phillips, analyzed the national economy of Great Britain in the 50’s. XX century, then concluded that in the case where the unemployment rate is 2.5%, then inflation at this moment is zero. Economists P. Samuelson and R. Solow constructed a similar curve for the US economy and obtained very different results. In their study, inflation was zero when the unemployment rate was 5.5%; the curve itself is less elastic.

This inverse relationship between inflation and unemployment is due to the fact that a relatively high level of unemployment forces job seekers to accept lower wages, which always hinders the growth of prices. In another situation, on the contrary, when the unemployment rate is rather low, the employer is forced to raise wages in order to attract new employees. In another case, when the unemployment rate is low, it means that among those who are not employed are all less fit for work, i.e. less skilled workers. As a result, the growth of aggregate demand begins to exceed the growth of the aggregate supply, which leads to an increase in the price level.

This effect is explained by the fact that newly recruited workers are guided by the nominal wage of this period. But after a while prices start to rise, which means a fall in real wages. The subsequent growth of employment is accompanied by the expectation on the part of new workers of a drop in the level of real wages. Therefore, the unemployed are increasingly skeptical about offering new jobs, comparing the expected wages and the size of unemployment benefits. In turn, employers, faced with the demands of employees to raise wages, will decide on the dismissal of some employees. As a result, the unemployment rate will rise, returning again and again to the natural level of unemployment. As a result, attempts by the state to reduce the level of unemployment do not give the desired result: the unemployment rate tends to natural, and the rate of price growth is accelerating.

Recently, the use of central banks by the Phillips curve in the decision to change the level of interest rates is seriously criticized. As indicated by a number of economists, in recent years this rule no longer works in many developed countries, especially in the United States of America. While unemployment in the United States has been historically low for several years, slightly exceeding 4%, inflation can not reach the 2% mark, which is also considered a very low indicator in all historical measures. Something in the economy broke and the rule, which worked more than half a century, may no longer be relevant.

(1 ratings, average: 5.00 из 5)
Leave comments. Ask questions. Subscribe to the newsletter on the main page of the FXTAA.com and you will be the first to learn about the release of new materials on our site.
Be prudent, observe risk management and trade in a plus.
SUBSCRIBE TO OUR NEW ARTICLES
(Visited 732 times, 1 visits today)