The fall in yields on benchmark US government bonds (10-year) in the past few days has pulled down the entire long edge of the yield curve. 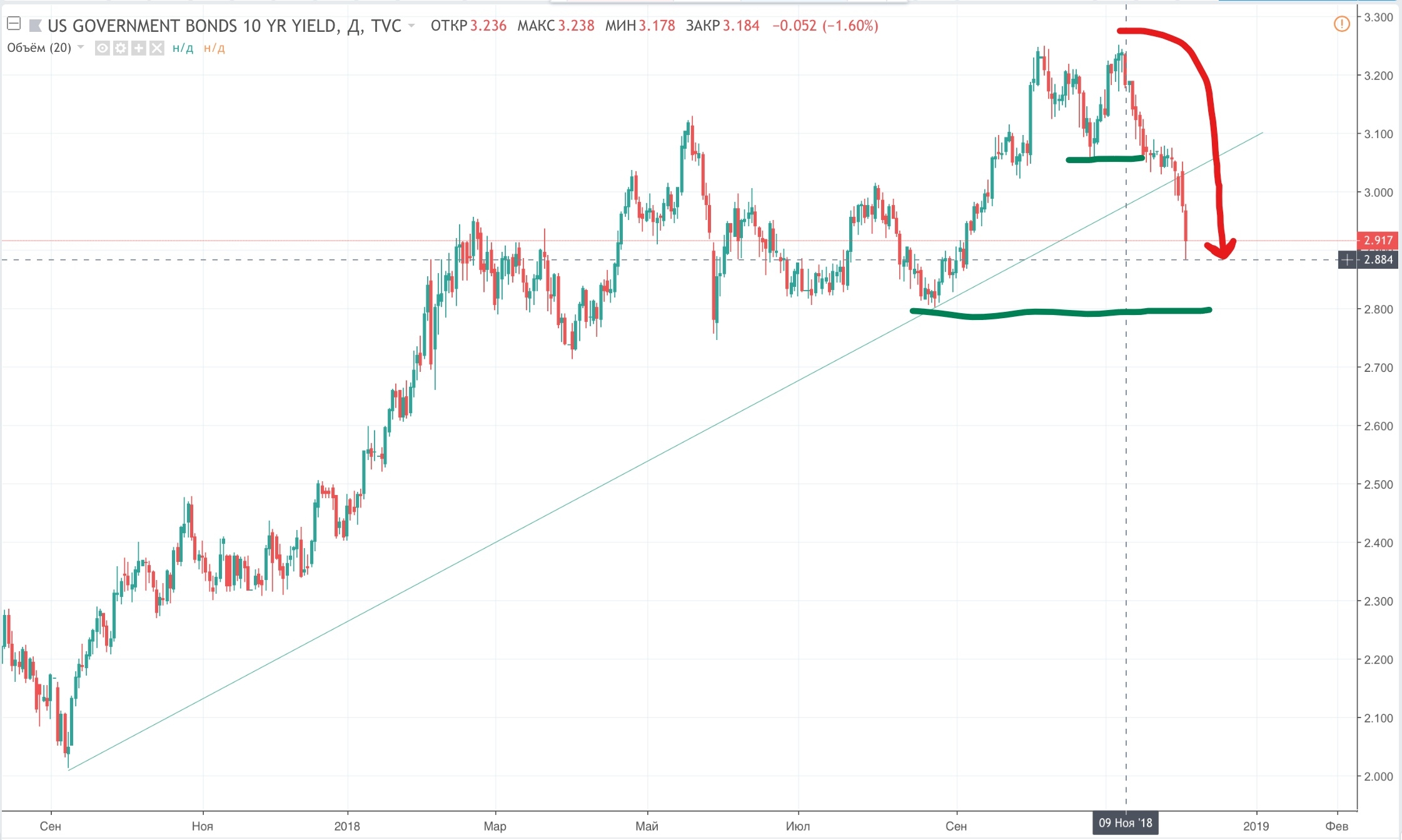 This led to the inversion of the yield curve for a plot of 2 to 5 years. What does this mean and when should we expect a recession in the USA?

Let me remind you that the inversion of the yield curve of US government bonds is a historically confirmed fact of the upcoming recession in the US economy. If you are not very well versed in the bond market or have forgotten about the basic principles of building and using the yield curve, I strongly recommend that you read the material “How to use the yield curve on bonds on Forex” and other articles in the Bonds rubric on our website.

So. After two days of active decline in the yield on the bond market, a historic event happened – for the first time in many years, the yield on 5-year US bonds fell below that of 2-year bonds. 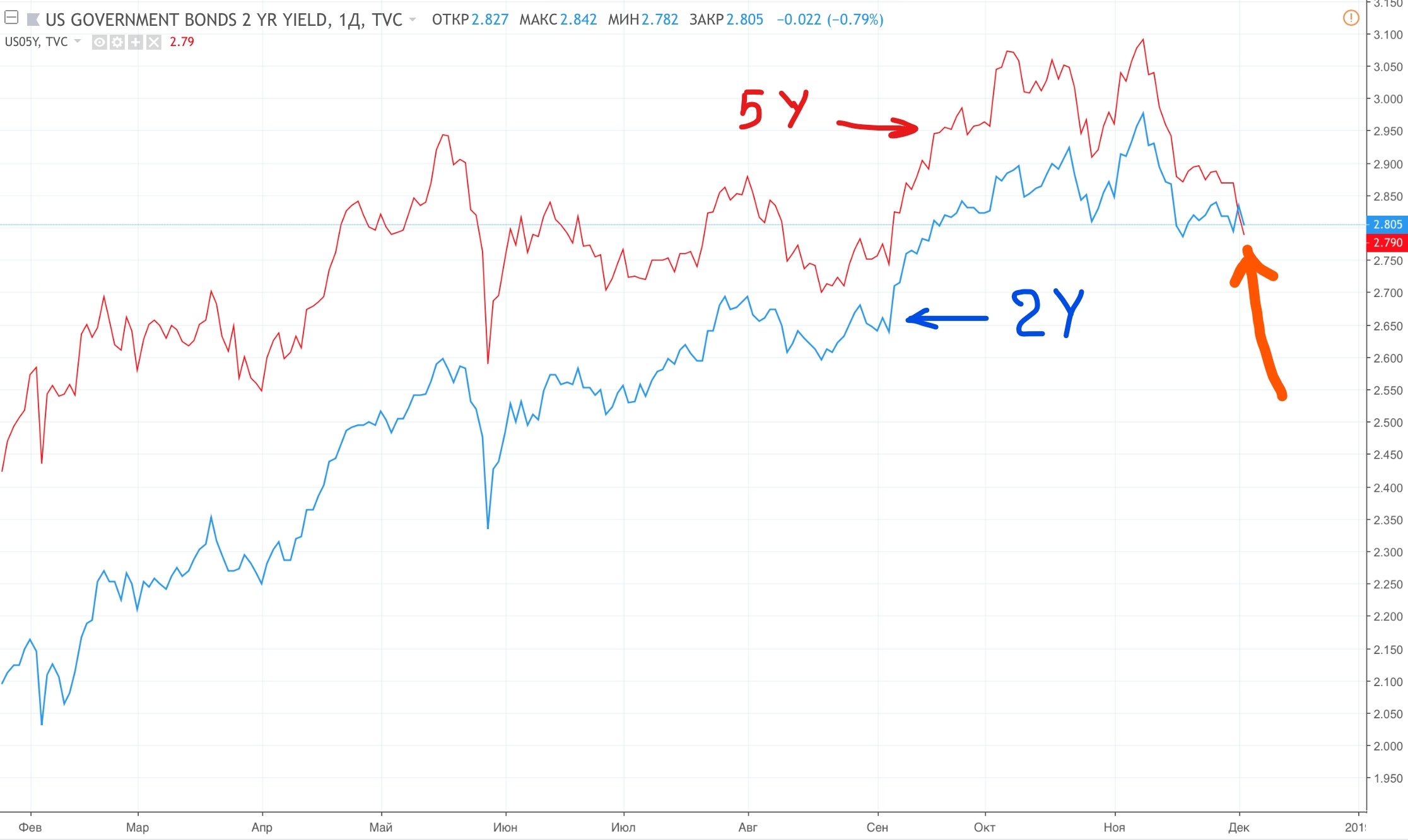 The fears of many economists and experts who warned about the danger of flattening the yield curve came true  – “The global crisis coming? What happens with the yield curve of US bonds”.

As a result, at the beginning of December 2018, we see the yield curve for bonds in the following form:

Pay attention to the part of the curve from 2 to 5 years (highlighted by brackets in the graph). It just has a barely noticeable reverse slope. If we look at the prices of bonds, we will understand the reason for this tilt.

The difference between five-year and two-year bonds is negative and amounts to -0.016 bp. We also see a strong drop in yield at the long end of the curve and an increase in yield at the short end, which led to additional flattering and inversion of the yield curve.

We can only guess about the reasons for such a strong drop in profitability. However, in my opinion, everything lies on the surface. The fall in profitability accelerated on Monday, immediately after the end of the G20 summit in Argentina, the key event of which was an agreement between the US President and the Chinese delegation on a pause in a trade war. This event should have a positive effect on financial markets and lead to the “risk on” appetite, which, as a rule, is reflected in the sales of government bonds in the market and the growth of their profitability. But we saw a situation on the contrary, active and volume purchases of the US public debt. At the same time, the Chinese Yuan was actively strengthening these days. Most likely, not only agreements on reciprocal tariffs were reached at the meeting of the two presidents, as we all know. But China agreed to both strengthen its currency and further invest in the purchase of US government debt. This should make it possible to lower the rate of the US dollar in the foreign exchange market, which is the cherished goal of the US administration. But at the moment, these are only my guesses, although some experts are inclined to a similar opinion.

One main question remains – will be recession in the US economy and when can we expect it? The excellent analytical article of the Economic Research Division of the Federal Reserve Bank of St. Louis will help us to answer this question. The article is called “Does the Yield Curve Really Forecast Recession?”. I bring it in full.

“It’s well known that in the United States recessions are often preceded by an inversion of the yield curve. Is there any economic rationale for this?

What is the economic intuition for these claims? One way to think about this is in terms of Friedman’s permanent income hypothesis, which states that an individual’s desired consumption expenditure today should depend not only on current income, but also on the likely path of his or her income over the foreseeable future.2 According to this theory, if people expect higher future income, then they will want to consume more today to smooth out their consumption. They can attempt to do so by saving less (or borrowing more). If a community is collectively “bullish” in this sense, desired consumer spending should rise in the aggregate and desired saving should fall, leading to upward pressure on the real interest rate.

Now, consider an economy that grows over time but where growth occurs unevenly (i.e., the economy alternates between high- and low-growth regimes). Imagine, as well, that the economy is occasionally buffeted by negative “shocks”—adverse events that occur at unpredictable moments (an oil price spike, a stock market collapse, etc.). In such an economy, recession is more likely to occur when a negative shock of a given size occurs in a low-growth state as opposed to a high-growth state. 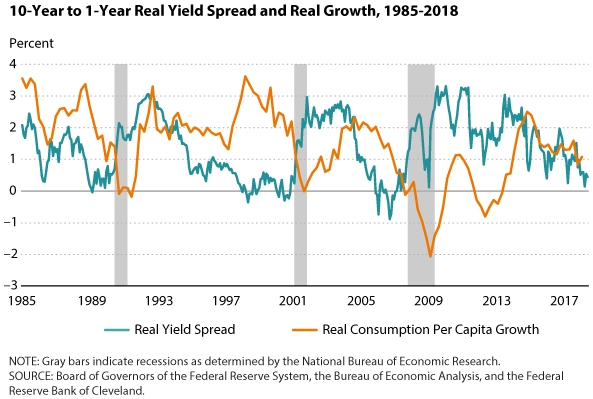 How does this idea match with the data? The figure plots the 10-year to 1-year real yield spread along with the year-over-year growth rate of real per capita consumption (excluding durables).3

As is clear from the figure, the real yield curve flattened and inverted prior to each of the past three recessions. Consistent with the theory, consumption growth tends to decelerate as the yield curve flattens. This is true even in non-recessionary episodes. In particular, the consumption growth decelerations of 1985-86, 1988-89, and 2006-07 were each associated with or preceded by a flattening or inverted yield curve. Each of the three recessions occurred when consumption was growing at a moderate to low pace.

Were the recessions that occurred following a yield curve inversion forecastable? The proximate cause of the 1990 recession was the Iraqi invasion of Kuwait and the associated spike in world oil prices. The proximate cause of the two most recent recessions—2001 and 2007-09—were asset-price collapses. It seems unlikely that the timing of these events could be forecasted with precision. Accord­ing to the interpretation here, the severity of the Great Recession of 2007-09 was in part due to the fact that the economy was already growing slowly at the time of the collapse in real estate prices. While consumption growth did slow prior to the collapse of the “dot com” asset price bubble in 2000, it grew at a moderate rate entering that recession. Accordingly, the recession of 2001 is one of the mildest on record.

Does the recent flattening of the yield curve portend recession? Not necessarily. The flattening of the real yield curve may simply reflect the fact that real consumption growth is not expected to accelerate or decelerate from the present growth rate of about 1 percent year over year. On the other hand, a 1 percent growth rate is substantially lower than the U.S. historical average of 2 percent. Because of this, the risk that a negative shock (of comparable magnitude to past shocks) sends the economy into technical recession is increased. While the exact date at which the shock arrives is itself unpredictable, the likelihood of recession is higher relative to a high-real-interest-rate, high-growth economy.”

So. From all this, we can conclude that the inversion of the yield curve is not the immediate cause of the impending recession, but it reflects the market conditions in which recession is most likely.

When can we expect a recession in the US economy? First of all, we need to note that there are different approaches to fixing the fact of the inversion of the yield curve. For example, the Federal Reserve Bank of New York (which is the main bank in the Fed structure) uses the spread between 3-month bills and 10-year bonds when building a yield curve model. Currently, the spread in yields between these periods is 0.487. When this situation was observed in the previous three cycles, in 1989, 2000 and 2005, it took about four months to six months for the spread between these securities to become negative. The US economy fell into recession on average 12-15 months after zeroing the spread. If we assume that the current cycle will develop in a similar scenario, the recession in the United States can be expected around the end of 2020.

However, as noted in the analytic article by the Federal Reserve Bank of St. Louis, cited above, each recession has its own driver. What kind of “black swan” is currently declining? Strengthening trade wars? Brexit? Waiver of the dollar in world trade? War? We already have a fall in the US stock market as a fact. Continuing monetary tightening by the Fed? Or something different?

This whole story of the inversion of the yield curve very much resembles the situation of “self-fulfilling prediction or prophecy (self-fulfilling prophecy)”. Let me remind you that this is a sociological term, denoting such a situation in which a forecast or prediction directly or indirectly affects reality in such a way that in the end it turns out to be true.

In other words, flattening, and then inversion of the yield curve, statistically predicts the occurrence of a recession, and large investors are beginning to move away from risks into safe assets. This leads to purchases of government bonds and reduces their profitability, thereby inverting the yield curve even more. In the end, everyone is waiting for a recession and it comes.

We are not given to know the future, but in the conditions of inversion of the yield curve in the United States, it is necessary to pay special attention to the external background and monitor political events and intermarket links.

Be sensible, put stops and trade in a plus.