The current drop in stock indices in all trading floors of the world, following the US stock market, is an excellent opportunity to demonstrate the behavior pattern of investors in the foreign exchange market, which is called “risk-on, risk-off”.

This model characterizes the behavior of investors depending on the prevailing moods in the market associated with risk appetite, and together with them the direction of capital flows.

During the periods of growth of the world economy and, first of all, the economies of developed countries, investors positively assess future prospects. In pursuit of greater profitability, they are ready to take on greater risks. This leads to a redistribution of financial flows in the direction of stock markets, emerging markets and high-yielding currencies. 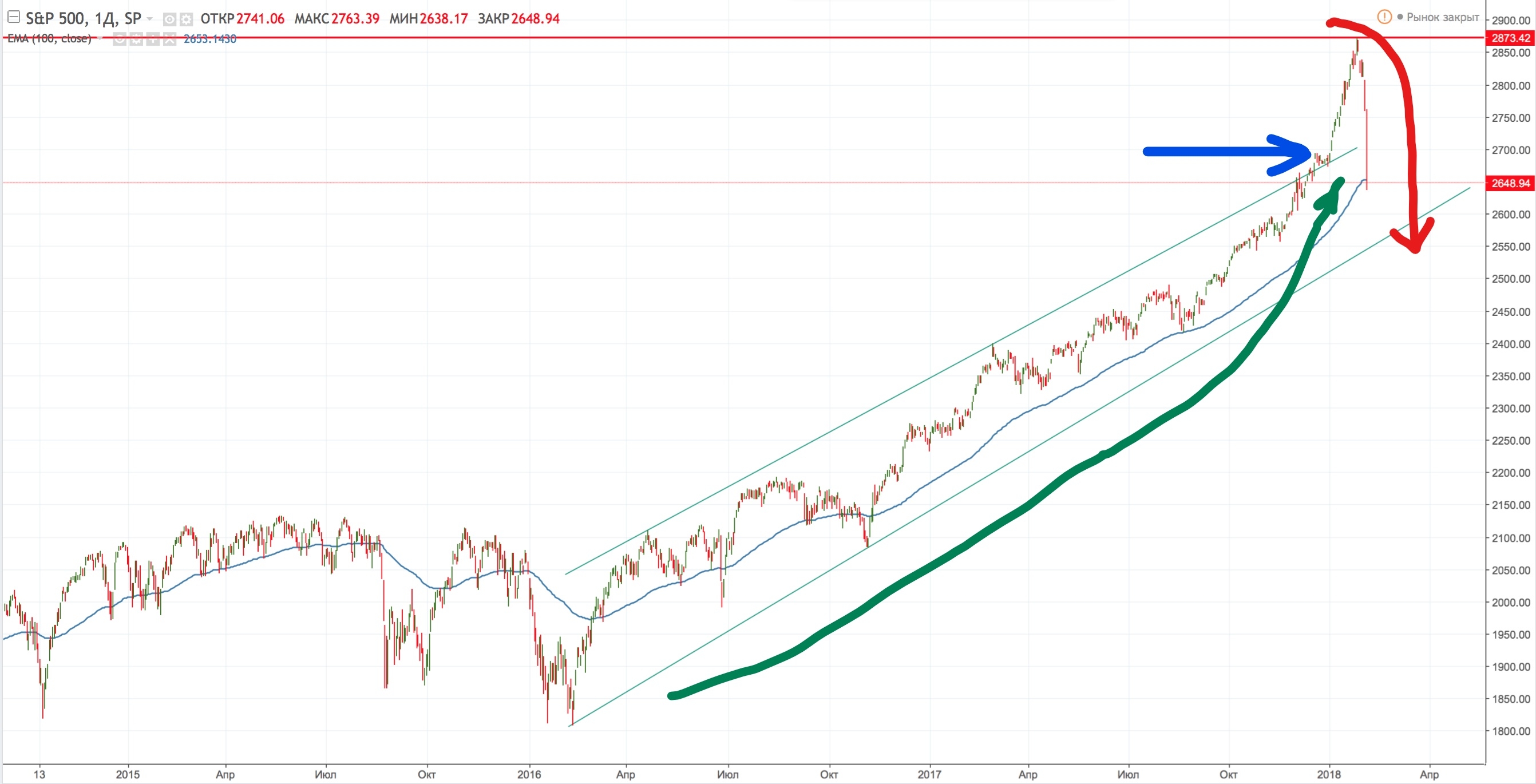 On the chart of the stock index S&P 500, you see a long growing trend. Since the beginning of 2016 for almost 2 years there have been practically no major corrections. This is a period of investors’ risk appetite. However, on February 2, 2018, the index began to decline actively. The next day, the decline turned into a collapse. The S&P 500 index decreased by 113.11 points (-4.10%), Nasdaq by 273.41 points (-3.78%), Dow index by 1175.14 points (-4.6%) in one day. It’s time to move away from risks. Note that before the fall, the index shows a very active growth, which displays the values ​​of the index from the rising channel breaking through the upper boundary. This is nothing more than the culmination of purchases. As a result, a very strong correction.

Growing fears about external risks, a decline in the stock market, leads to the reverse situation – the curtailment of appetite for risk, avoiding risks. This can be caused by foreign policy, political and other reasons. The collapse of markets, military conflicts, political uncertainty, elections, natural disasters also force investors to wait and go to safe assets, important decisions of central banks. First of all, these are US government bonds. Gold is also a traditional defensive asset. 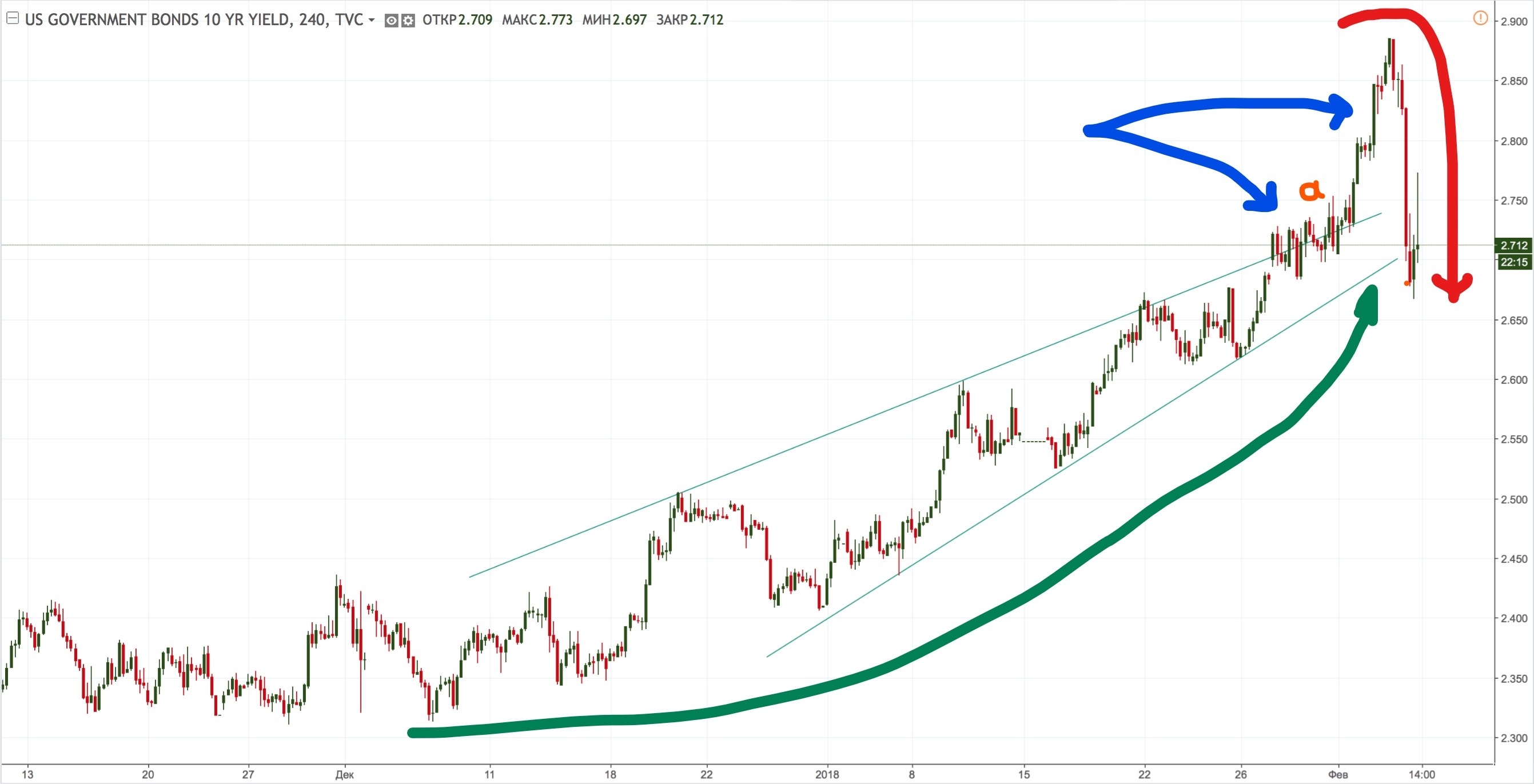 On the 10-year US government bond yield chart, we see an active growth in yields, which is due to investors’ tendency to risk. They sell low-yield government bonds (as a result, bond yields increase) and invest in more profitable assets. This is due, among other things, to the continuation of the cycle of raising interest rates by the Fed. But as soon as the US stock market fell, investors began to move away from risks and actively buy the most reliable benchmark bonds. You see this on the chart as a sharp drop in yield. And how on the chart of the S & P 500 index we see the culmination of purchases. The value of profitability is traded for a long time at the upper boundary of the rising channel at point a, breaks the boundary, sharply accelerates and a collapse occurs.

In the foreign exchange market, the status of the “safe haven” currency is primarily the Japanese yen, as well as the US dollar and the Swiss franc. In spite of the fact that after the National Bank of Switzerland canceled the pegging of the franc rate to the euro in 2015, it lost its unequivocal status as a safe haven, investors continue to buy it during periods of uncertainty and increasing risks. For asylum currencies, an important factor is the stability of the exchange rate over a long period of time, respectively, the effect of central banks on the regulation of exchange rates positively affects, from the perspective of investors, the safe status of these currencies. Of course, the central banks themselves are far from delighted with the realization of such market models. 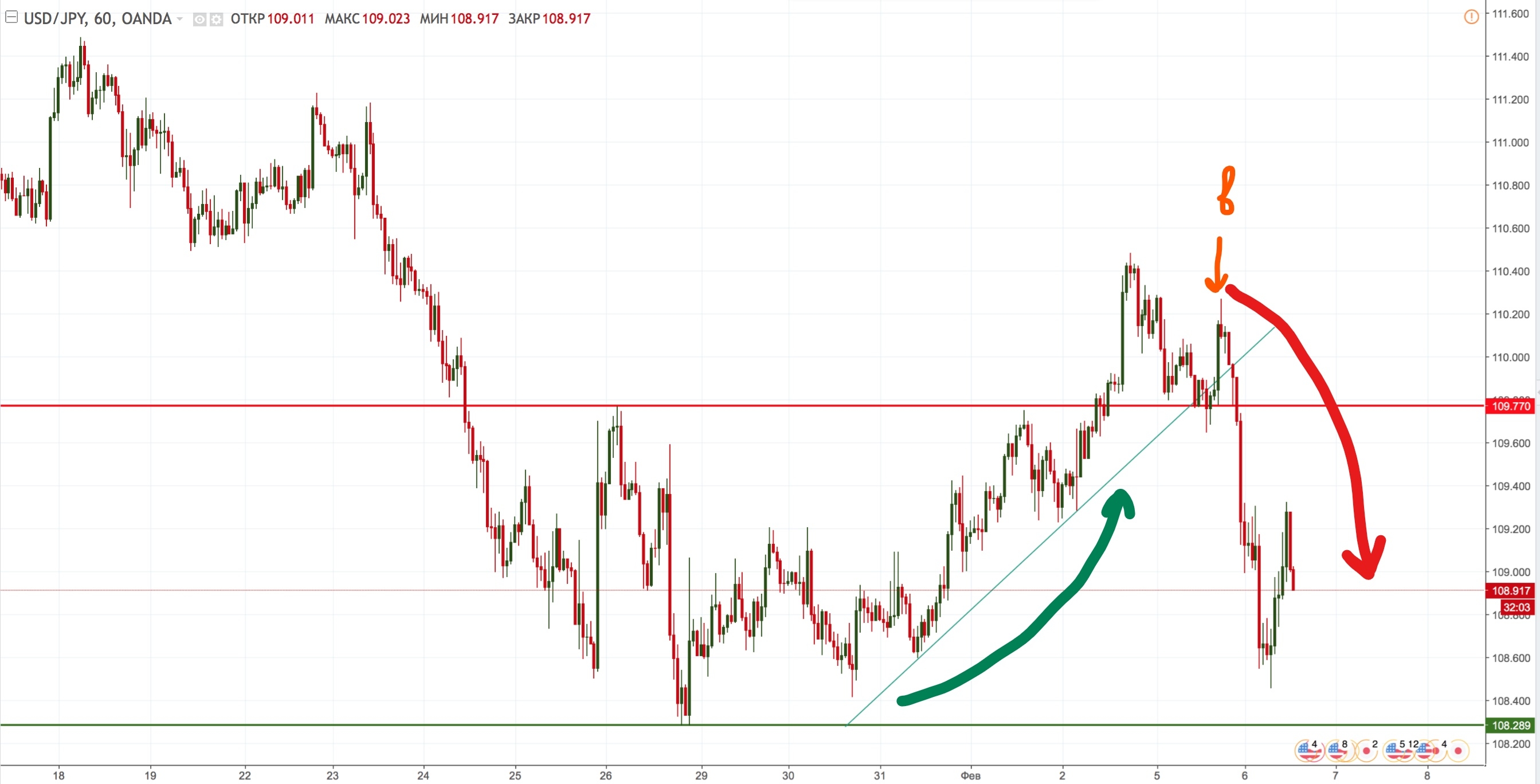 On the hourly chart of the Japanese yen, you see that the pair USDJPY after the reversal grew, reflecting the overall growth of the dollar in the foreign exchange market. However, at a time when it became clear that the stock market began to fall (point b on the chart), investors began actively buying up the Japanese yen. The drop in appetite for risk led to a decrease in the pair USDJPY almost to the level of support. This happened simultaneously with the strengthening of the US dollar, the fall of the euro and the British pound, which is extremely unusual for the foreign exchange market.

Why these currencies? As is known from the basic foundations of the formation of exchange rates, currencies, whose countries have a large positive balance of foreign trade, tend to rise in price relative to other currencies. Central Bank of these countries have to artificially maintain a lowered rate of national currencies to stimulate exports. For this, a soft monetary policy, low rates, QE programs and other methods are used. Japan and China are just such countries. The US dollar is used as a safe haven primarily because of the reserve status of the US currency, as well as due to the world’s largest economy, strong financial sector, political stability and high liquidity of the US dollar.

In recent years, it has become apparent that the single European currency is also beginning to be viewed by investors as a safe haven currency. This is due to the political stability and strong economy of the eurozone. Also, the anti-dollar status allows investors to go into the euro in situations where the uncertainty is related to the situation inside the US and affects the US dollar.

Let’s sum up the subtotals. The sentiment of investors in the situation of the “risk on” is characterized by the following:

In a situation of “risks off”, the opposite is true. It is not necessarily the presence of all these factors at the same time. For example, at the moment gold behaves very steadily and does not seek to grow. Perhaps due to the fact that it is already at the perennial highs. The main indicators of the risk sentiment are stock indices, yield of benchmark government bonds and the Japanese yen.

There is another tool that monitors investor sentiment related to risks, and which is actively used by traders primarily in the stock market. It is often called the “index of fear”, but in fact its use is much more comprehensive. This is the VIX – Chicago Board Options Exchange Market Volatility Index. The VIX index is the result of the application of the Black-Scholes model for the evaluation of options. Black and Scholes are two professors who discovered a mathematical way to calculate the price of put and call options. As a result of applying their mathematical model in the options market, a revolution occurred. In their equation, one variable is always absent – volatility (σ) or implied instability. This is the VIX index, which shows the volatility in the 30-day options for the S&P 500 index in accordance with the calculations from the equation of the Black-Scholes model. It is believed that the VIX index does not simply calculate past or future volatility, but predicts it in the future.

The first version of the VIX index Chicago Board Options Exchange began to count in 1993. The index was created to estimate market expectations for the 30-day volatility and was calculated using market price options on the S&P100 index. In 2003, the Chicago Stock Exchange updated the methodology for calculating VIX. Now it is based on the S&P 500 Index (SPX) and evaluates the expected volatility by averaging the prices of options on the SPX, chosen from a wide list of strikes with certain weights. The new methodology transformed the VIX index into a practical trading standard and a volatility hedge. In 2004, CBOE brought to the exchange the first futures contract on VIX, and in 2006 launched VIX-options. 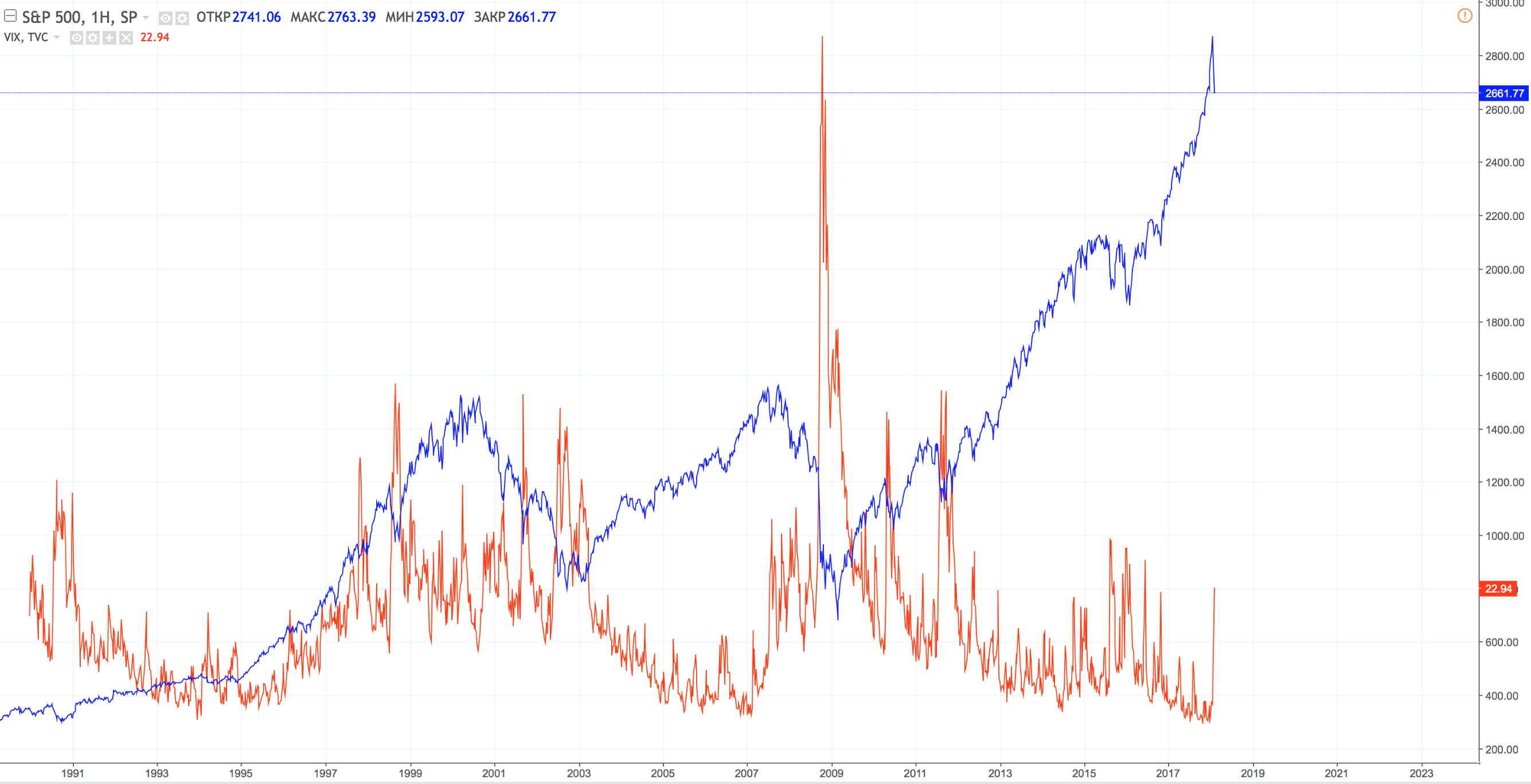 On the weekly chart VIX (red) and S&P 500 (blue) we see a clear relationship on the history. The growth of the “fear index” coincides with the periods of correction or fall of the S&P 500 index, and, accordingly, with the period of flight from risks in the financial markets. Please note that the entire last period of growth in the S&P 500 index since 2009, the VIX index has declined, reaching its lowest level before yesterday’s decline in the world’s stock markets.

The VIX value is measured in percentages and, slightly simplifying, means the range of movement expected in the S&P 500 index within the next 30 calendar days. Since it is a measure of the market’s perception of volatility, this volatility can be expected by traders in any direction. In other words, the high value of VIX means only that investors see a big risk in a possible sharp, strong and unpredictable market movement. At VIX values ​​less than 20, the stock market predicts a “favorable climate” with low risks. When VIX falls too low, it reflects investor satisfaction, which is dangerous because of market participants expecting an early surge in volatility. When the VIX value is greater than 20, an environment with increased risks is projected and investors include a risk avoidance regime. 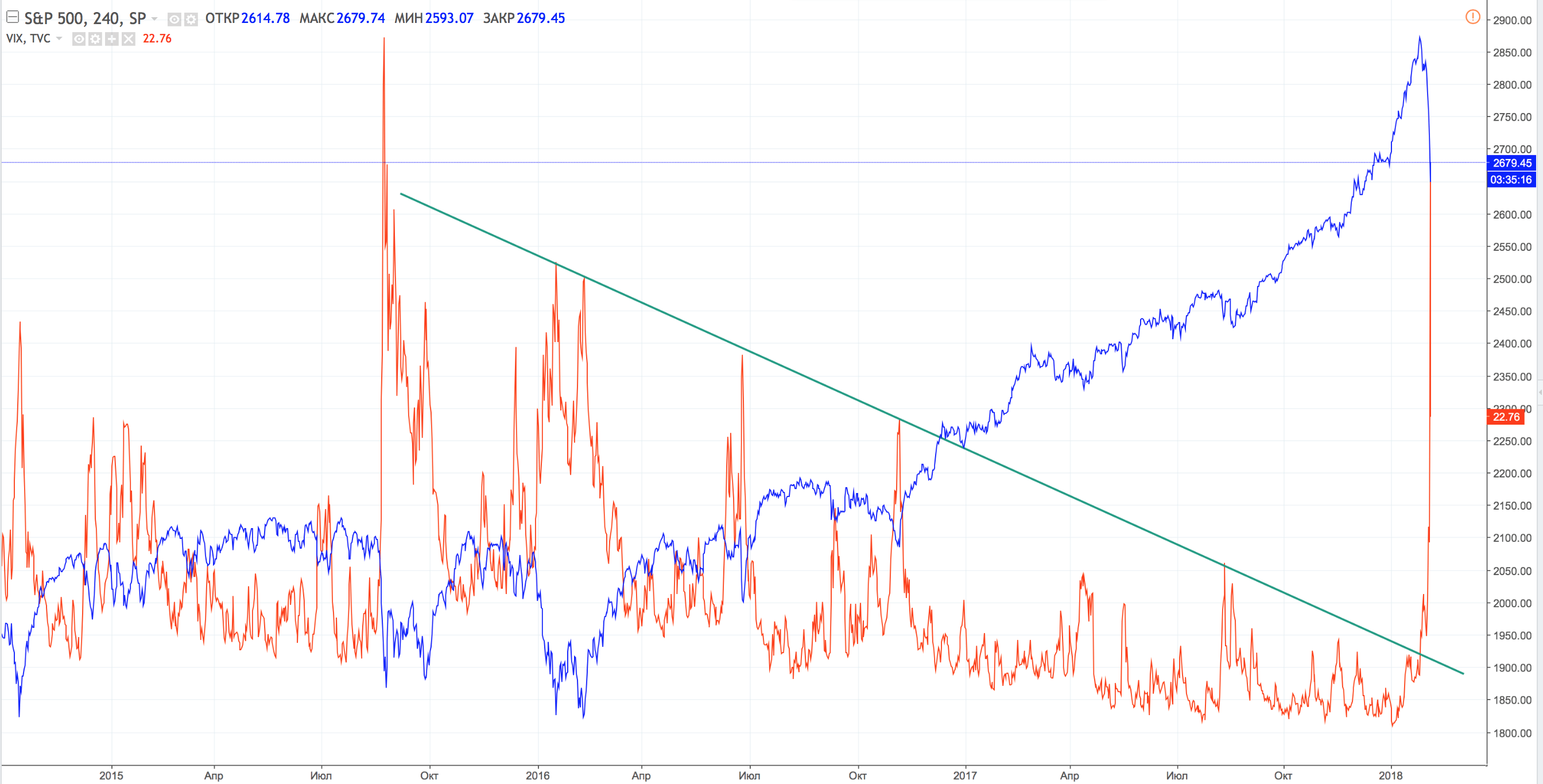 Look at the downward trend of VIX on the 4-hour chart (the club line). As it is written above, this shows too strong confidence of investors in a cloudless future. The index began to grow and crossed the trend declining line before the fall of the stock index. In my opinion, this index contains an element of a self-fulfilling forecast.

If you are interested in this index in more detail, you can see it on a special page of the CBOE – http://www.cboe.com/products/vix-index-volatility.

Market sentiment associated with the assessment of risks by investors, with a high frequency change. Sometimes it can happen in one day. Understanding these sentiments gives traders an advantage in trading and allows them to conclude deals in accordance with the prevailing market trend at the moment.

With an excellent example of how the Japanese yen (USDJPY pair) behaves under the risk-off sentiments in the forex market, you can on this link – Technical analysis of USDJPY and S&P500 – chained by one chain.

1 thought on “Risk On, Risk Off – forex sentiment, how to understand and use it”