Oil quotes for a barrel of North Sea oil have been in a steady growing trend for a long time. But all trends at some point end. 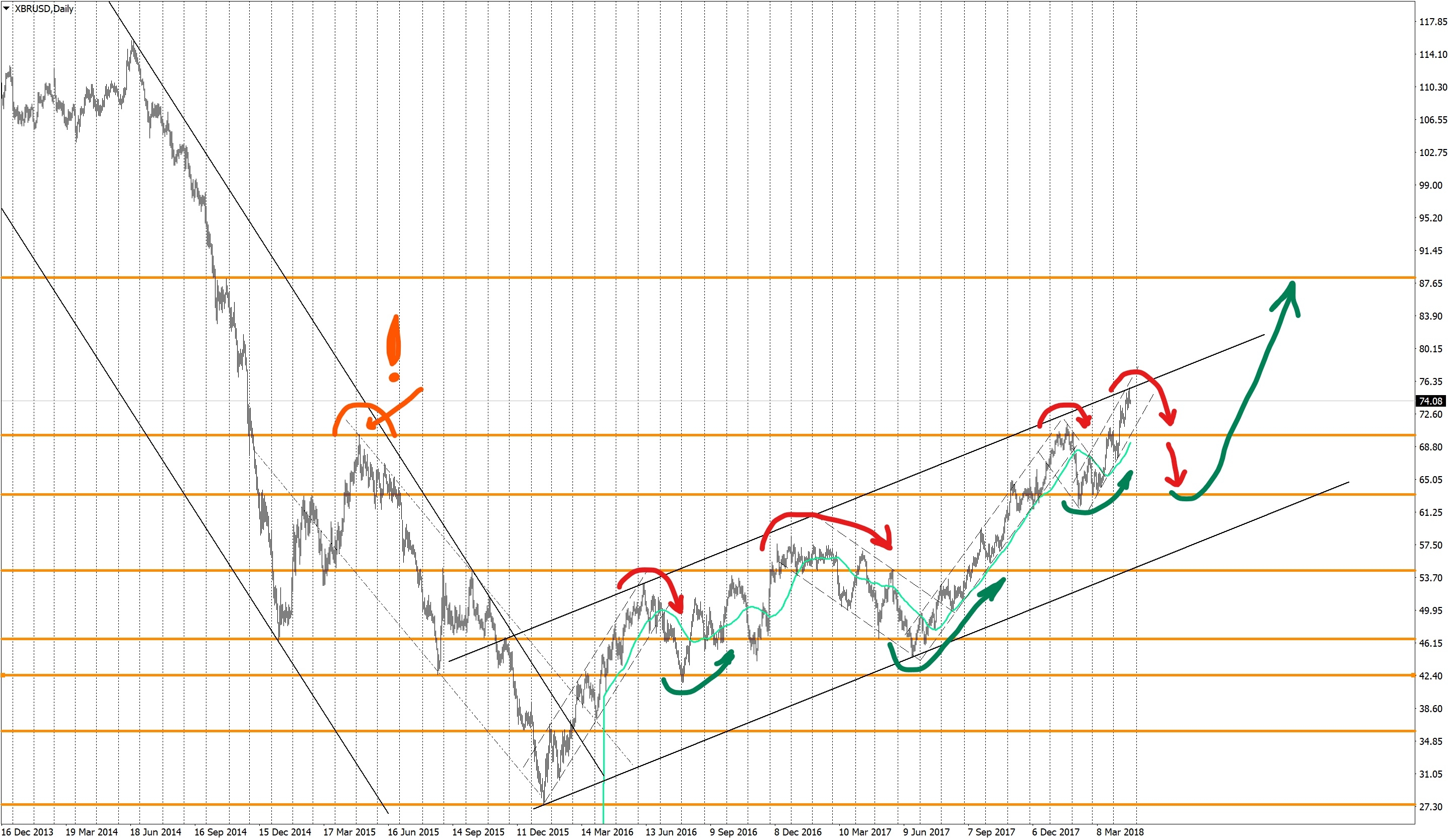 What dynamics of oil prices can be expected in the future?

In this review, I will not touch upon the fundamental factors affecting oil prices. The supply-demand ratio, production level and reserves, OPEC policy and political factors are undoubtedly extremely important for the analysis of oil prices. But we confine ourselves to purely technical analysis.

Oil is traded in the long-term ascending channel. However, note that every time the quotes approach close to the upper border of this channel, a strong correction occurs. So it was three times out of three. And the correction occurs to the previous long-term level (yellow horizontal lines). At the moment, the price for Brent crude oil has again come close to this sloping resistance line and, as we will see later on the chart of H4, touched it. Based on this, we can expect the beginning of correction in the coming days.

It should be noted that long-term dynamics of oil prices is well described by a technically simple moving average for 200 periods on H4 (light green on the daily chart and H4 chart). Traders perceive this moving average as support or resistance, as can be seen on the H4 chart. This average sliding practically repeats the boundaries of medium-term channels, formed by the price of oil. 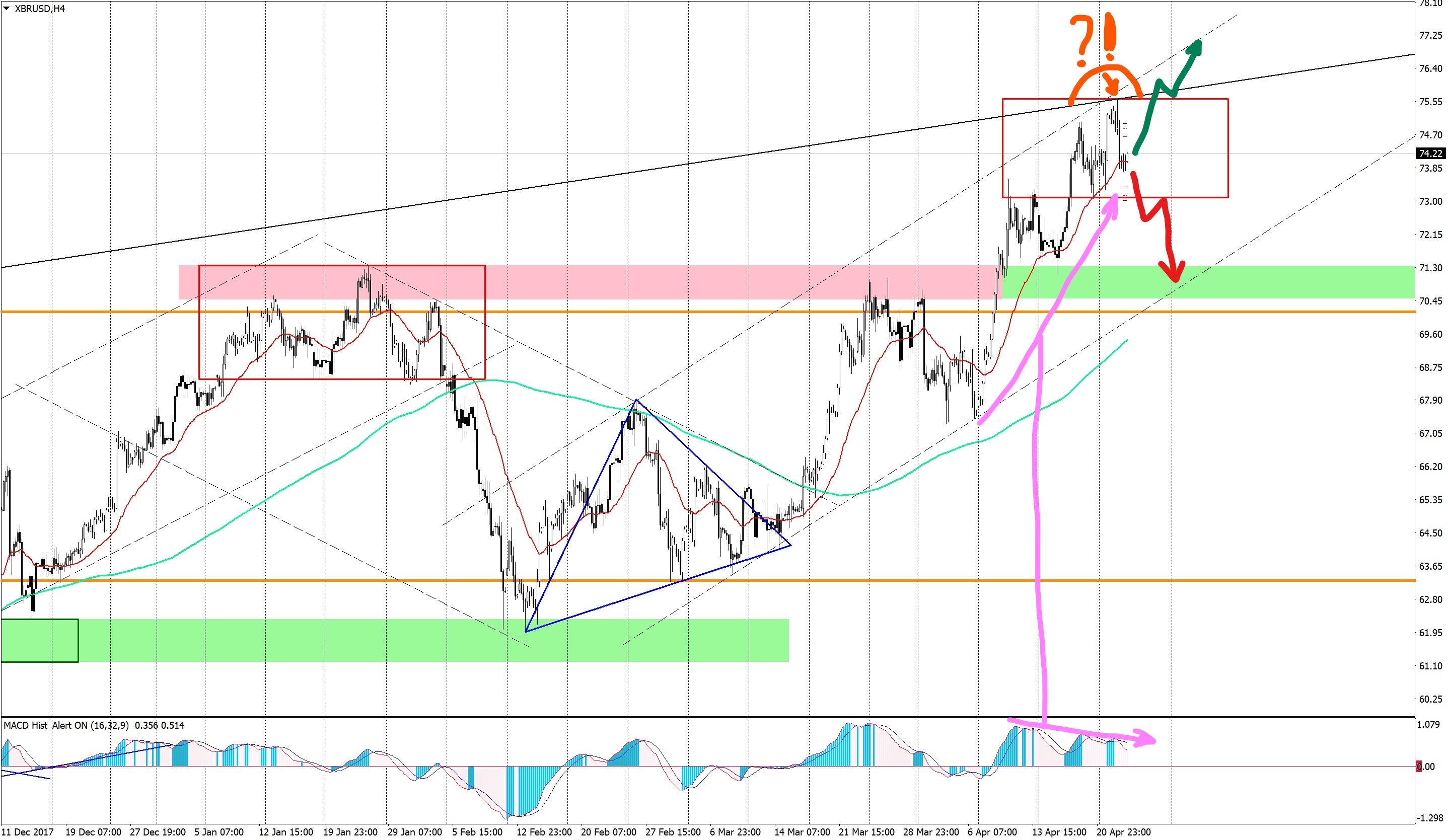 On the H4 chart, we see a mirror support zone at a value of 71.00 (green zone), which previously acted as a resistance (pink zone). Yesterday, the price of oil tested the upper limit of the long-term ascending channel and rolled it away. Also, the upper boundary of the medium-term uplink was tested.

At present, short-term support is located at the value of 73.08, short-term resistance – at the high of yesterday – 75.60. This area is highlighted in the graph with a red rectangle. In the case of a breakdown of the rectangle, it will be a signal to the beginning correction for oil.

The price exit from the rectangle upwards will lead to the breakdown of the ascending channels and can lead to a strong impulse and the formation of the culmination of purchases on oil.

Also, notice the strong divergence between the price and the MACD indicator. New price highs are not supported by the dynamics of the indicator, which is a strong signal for a possible upcoming correction.

Summing up the technical analysis of quotations for Brent crude oil prices, we can conclude that correction is possible in the near future. Will this turn the trend or not say at this time too soon.

At the same time, we must consider the dependence of quotations on oil on the value of the dollar in the foreign exchange market. The last impetus for the growth of the dollar did not affect oil, and moreover, it continued to grow and another maximum was shown yesterday. But in the long term, this factor can be crucial. 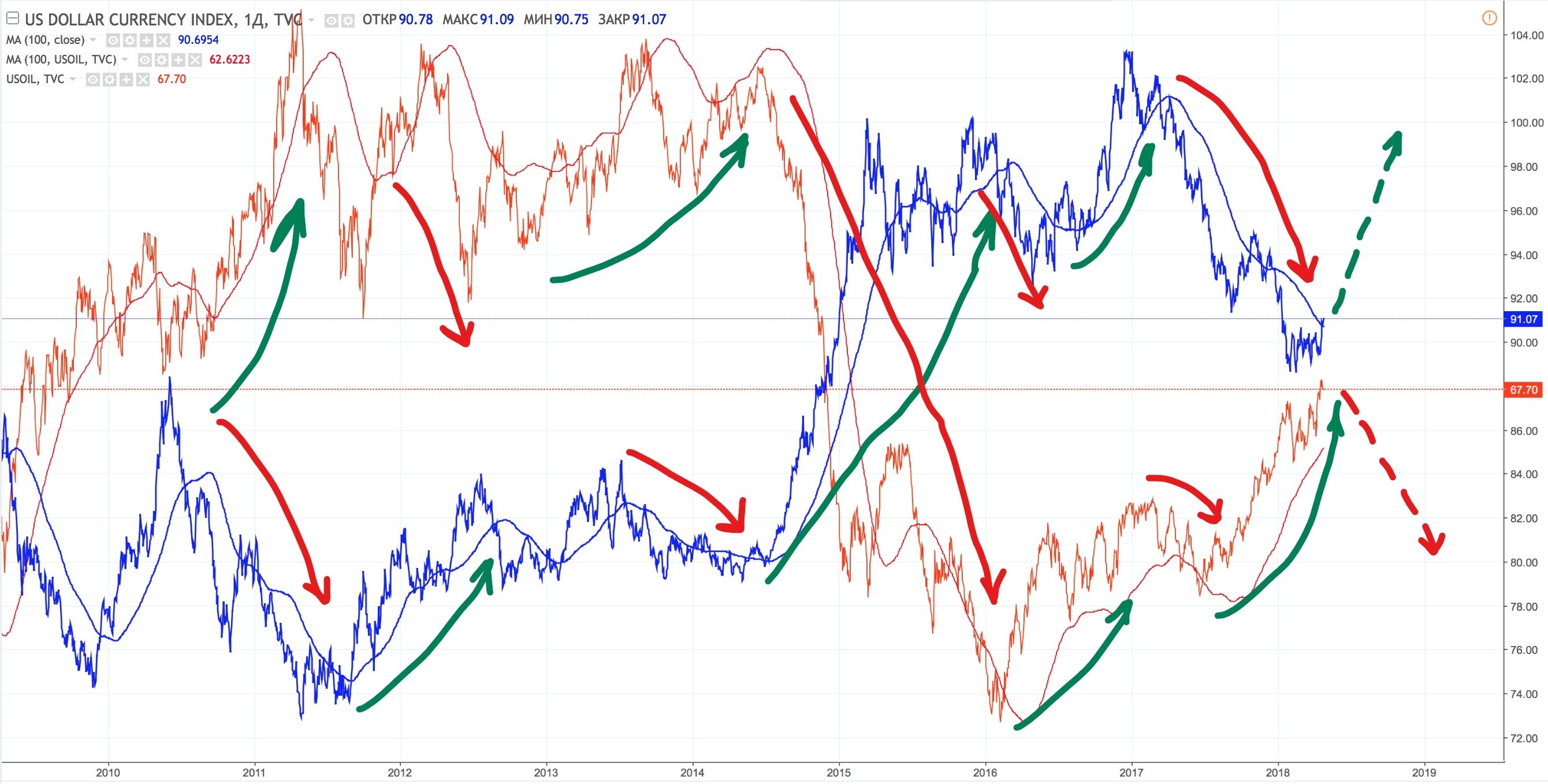 On the world market, oil is quoted in US dollars, so the change in the value of the dollar reflects the price of oil. As can be seen on the graph, this relationship exists quite stably in a long time period. Although we can not talk about a strong correlation, but this fact must be taken into account by all oil traders.

The US dollar index is testing key resistance these days. In case of breakdown of this resistance and fixing of the dollar index above it, we can see the beginning of the trend for the growth of the US dollar. And this will certainly put pressure on oil quotes and cause a decline in oil prices.

Trading recommendations for Brent crude – Buy in priority. Oil is in a stable long-term growing trend, but a technical analysis of oil prices suggests that in the near future, there may be a correction of oil prices.