The situation associated with the introduction of US sanctions against Russian companies is gradually calming down. We can look at the technical picture, formed on the Russian ruble in tandem with the US dollar – the USD/RUB currency pair. 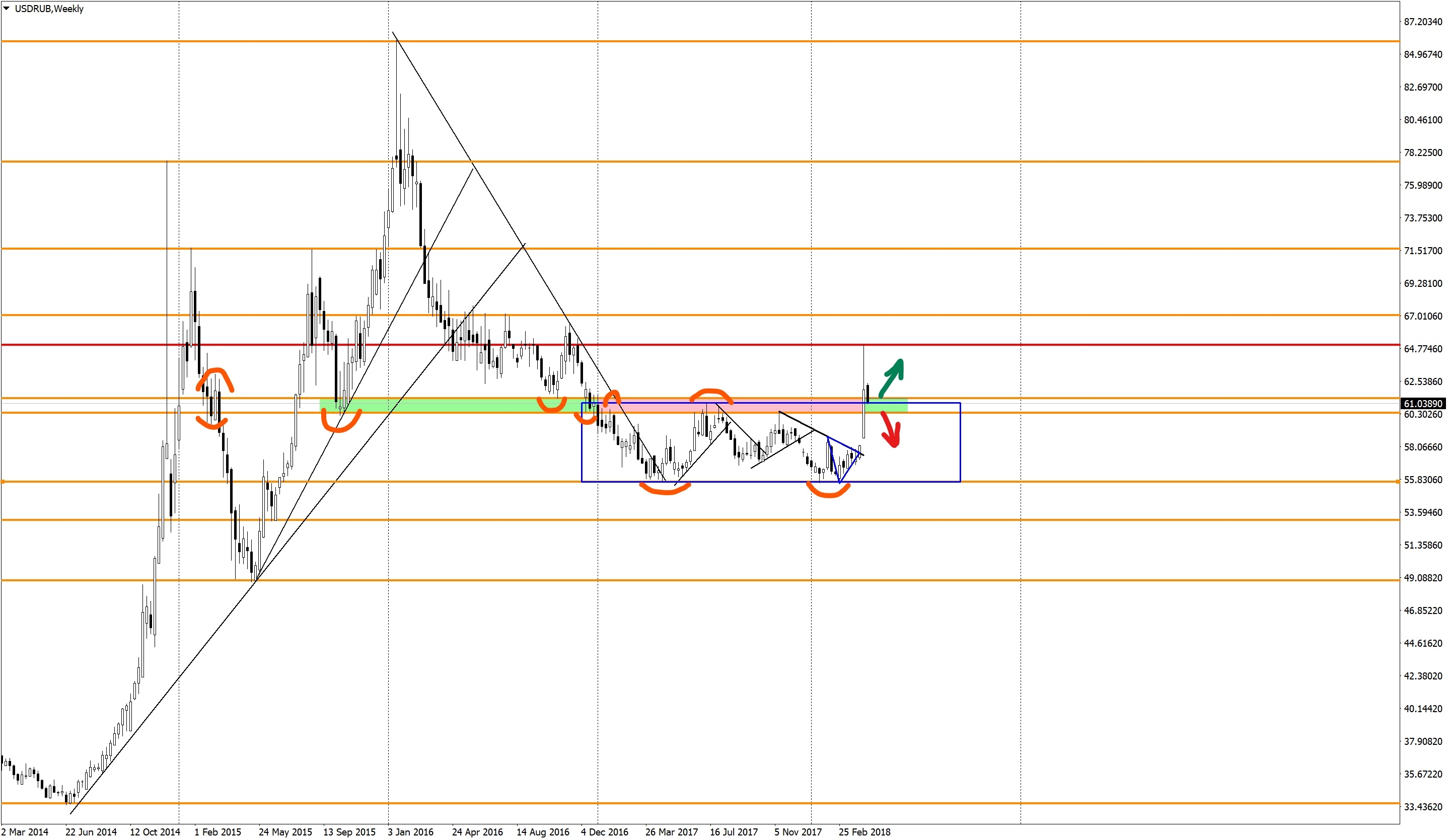 Let’s start with the weekly chart.

We see a long-term mirror zone of the resistance zone, limited by the values ​​of 60.40 – 61.36. For more than a year, this zone acted as a long-term support (green zone). After breaking through in December 2016 until last Monday (more than one year), she acted as a resistance (pink zone). Last week, in response to imposed sanctions, this zone was punctured. Currently, it acts as a mirror support. For more than one year, the Russian ruble traded in the price range of 55.70-60.95. This range is highlighted on the weekly chart with a blue rectangle.

Given the strength and duration of the mirror reversal zone, we can assume that if the price to gain a foothold above it, we will see the continuation of the fall of the ruble against the US dollar. The fall in the pair’s price below this zone gives a chance for further strengthening of the Russian ruble. 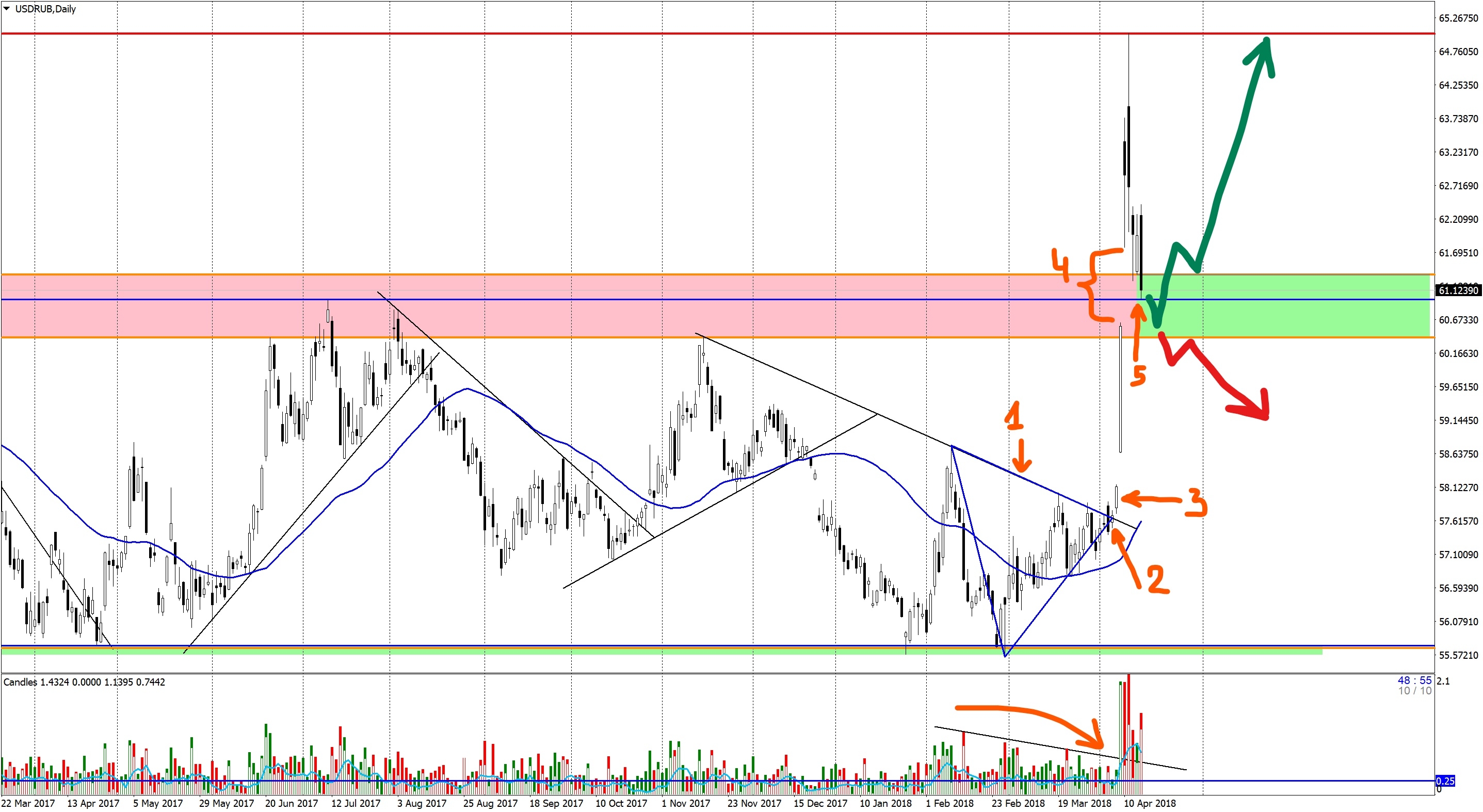 The daily chart of the USDRUB pair tells us that the last month the ruble consolidated, which led to the formation of a long-term triangle. The upper edge of the triangle coincided with the long-term downward trend line (point 1 in the chart). Consolidation occurred against a background of declining volatility.

Today we see that the ruble tested the long-term consolidation zone (blue rectangle), stopping exactly at its upper boundary. At the same time, the pair closed half of the second gap (point 4).

What can we expect next. The ruble is now very vulnerable to political and macroeconomic instability. The US is ready to impose sanctions for Russia’s support of the regime in Syria. Thus, the ruble will react actively to news events. In case the external background calms down, we need to closely monitor the behavior of traders in the support zone. If the price is fixed above it, there is a strong probability that the ruble will continue to decline and, at least, it protests resistance (the red line). Fixing below this turning zone may entail a gradual strengthening of the ruble (the fall of the pair USDRUB).

In addition, you need to monitor the gap. The pair almost closed the second gap (point 4). Perhaps strengthening the ruble will allow traders to close the first gap, and then re-test the reversal zone. Strengthening the ruble should be accompanied by a reduction in external political risks, and oil, which is already at the highs, will provide additional support to the Russian currency.

Trading recommendations – the Russian ruble is still very serious risks associated with the external political background. The situation with the attacks on Syria ended, without having had a significant impact on the financial markets, as described in the article “A compromise missile strike on Syria“. Possible high unpredictable volatility, including gaps at the opening in response to the news background. The ruble is currently dominated by sellers, but I would recommend waiting out the situation for a more relaxed time or significantly reducing the risks in case of opening trading positions in the Russian currency.