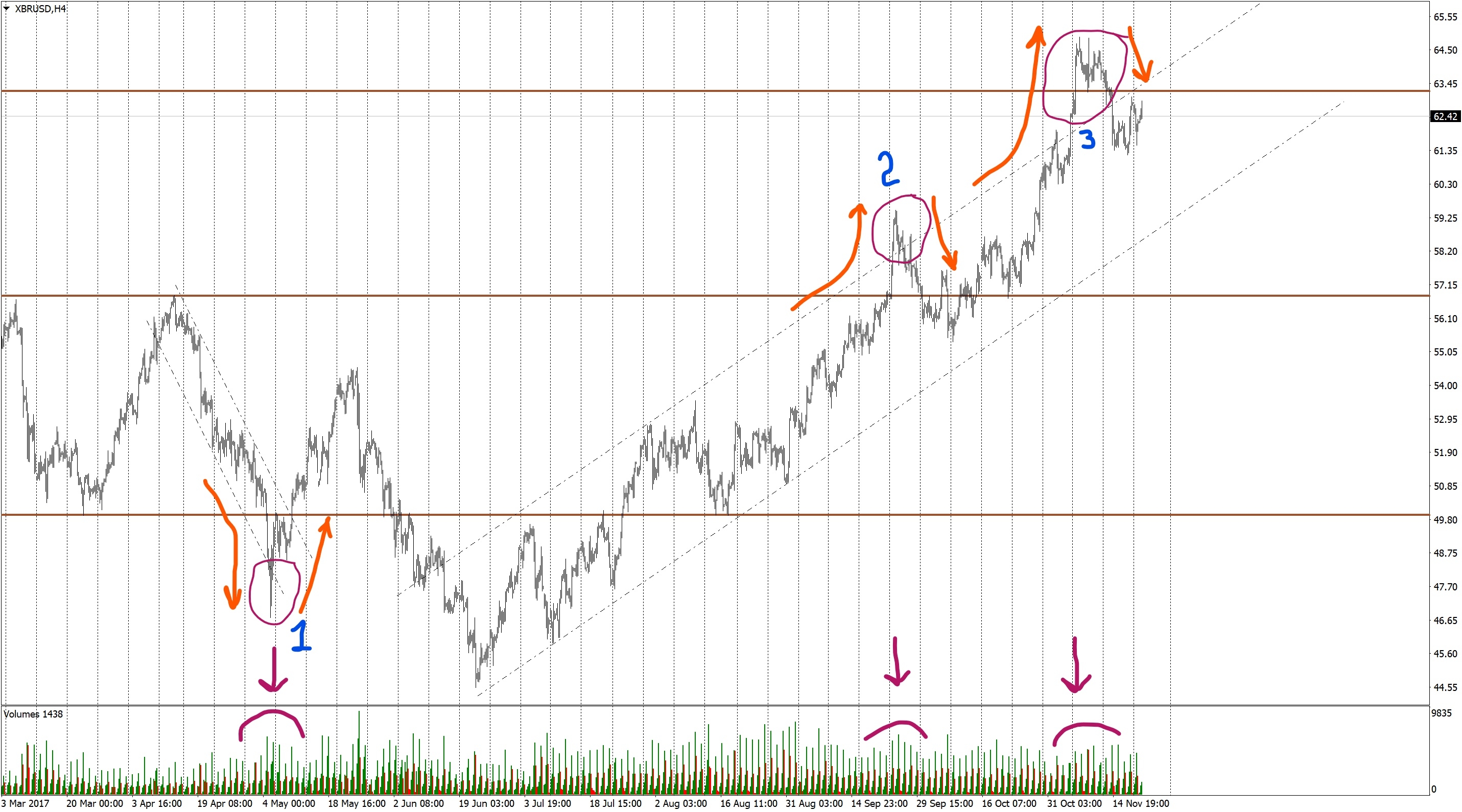 As a rule, the culmination of purchases and sales describes the terms of VSA (Volume Spread Analysis) and is associated with the increase in volumes on the culminating candle. This method of analysis came from the stock market and is not fully applicable in the foreign exchange market. At forex market, volumes are represented by tick data and it is not always correct to use them. Given this, we will learn to determine the culmination based on available methods of technical analysis. I’m not in favor of defining the culmination as one candle. Rather, it is a technical price pattern.

The culmination usually begins with a strong impulse after the penetration of an important level and is accompanied by the triggering of stops and the closing of unprofitable positions. This momentum is joined by new traders, which gives impetus to acceleration and the price aggressively goes beyond the price channel. At some point, traders start to fix profits and this leads to the opposite price movement. In some ways the mechanism of the beginning of the culmination is very similar to the “short squeeze“. And very often “short squeeze” ends with a culmination. We can say that the culmination is a state of extreme overbought / oversold. However, I do not like this comparison, since the price may be overbought / oversold for quite some time. And the determination of this price condition is associated with the use of technical indicators (RSI, Stoсhastic), which are lagging far behind and give extremely ambiguous signals.

On the oil chart (XBRUSD), we see three examples of culmination. Pay attention, they are visible without the use of technical indicators. The main indicator here is the aggressive price exit from the border of the price channel. In each case, the culmination is preceded by breakdown of the resistance / support level. In the first case, the culmination was followed by a trend reversal. In the second case, the culmination resulted in a significant correction, which returned the price to the price channel to the broken level, consolidation and continuation of the trend. The third case ended with correction. What awaits us – the continuation of the trend or a reversal, we will see in the near future.

Pay attention to the tick amounts in the culmination. It is unlikely that they can help in determining the further behavior of the price of oil. We see a slight increase in tick volumes, which once again proves the difficulty in applying teak volumes to Forex for the analysis of the culmination. 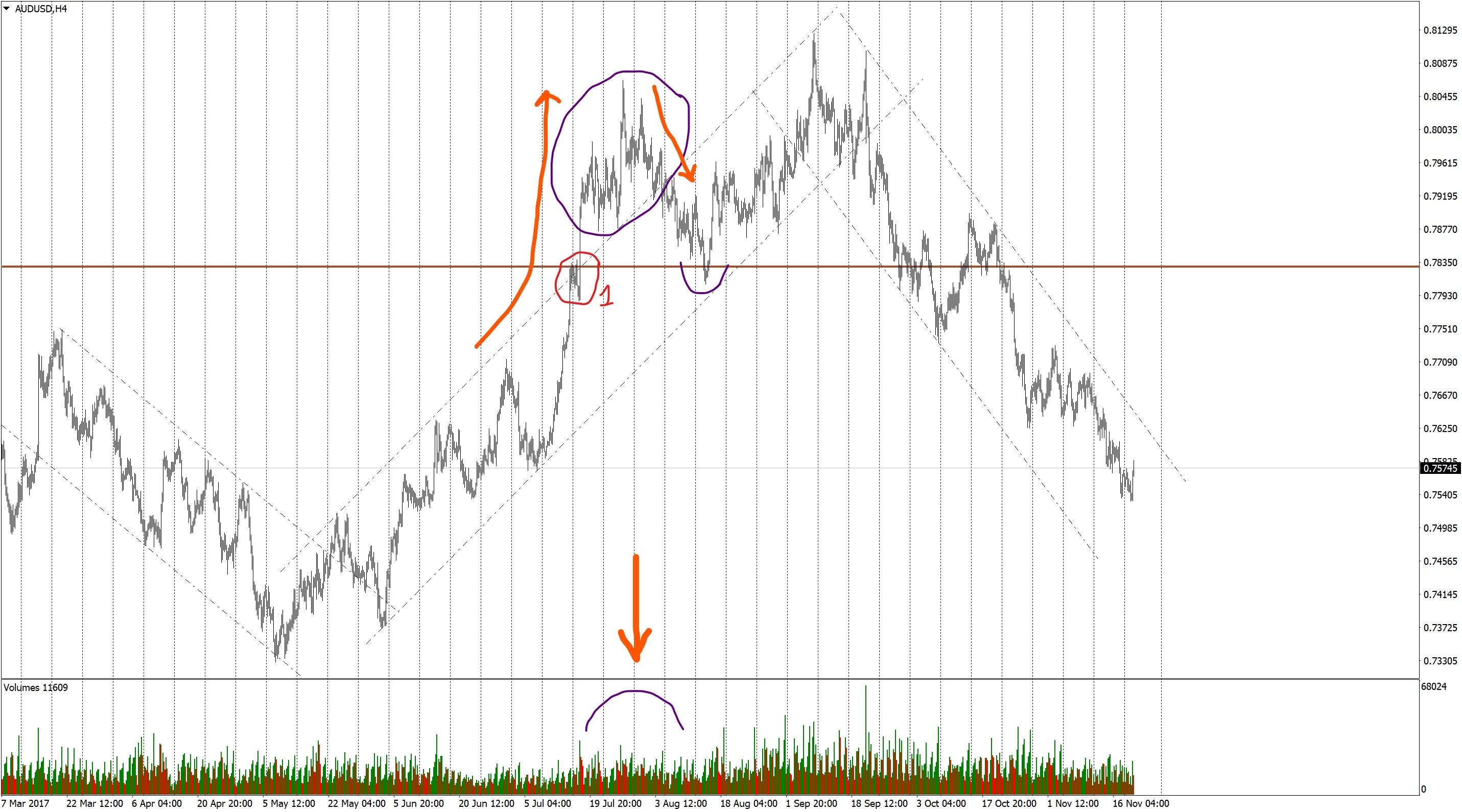 AUDUSD H4. The upward movement was greatly accelerated after the breakdown of an important level – a maximum of almost 2.5 years. We see a break in the border of the rising channel, the price then used this border as support, but traders preferred to fix the profit, which led to a significant correction to the previously broken level. Again, teak volumes can not help us in determining the culmination. 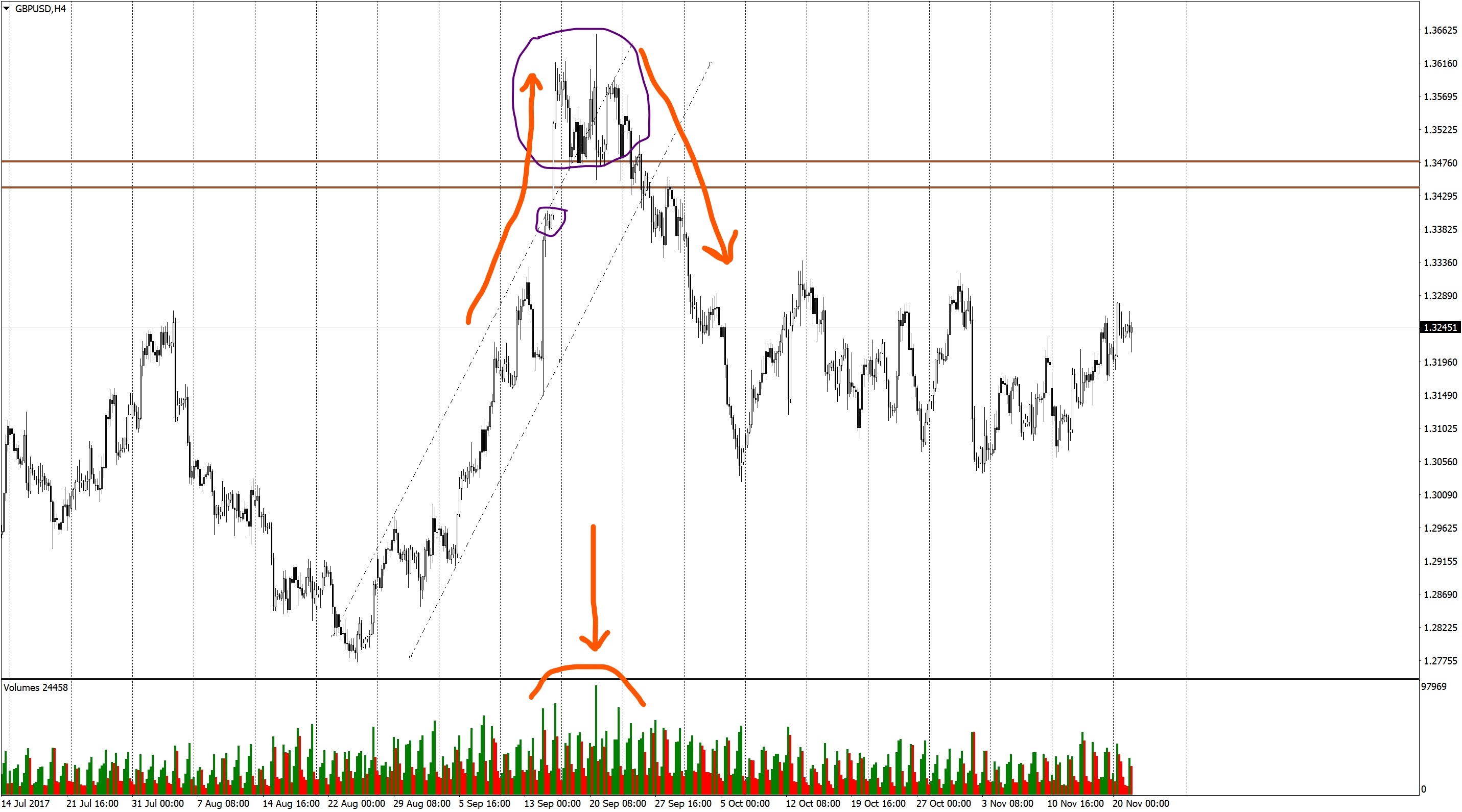 The upward trend of GBPUSD ends with a culmination, which leads to a strong reverse movement. But in this case, the tick volume indicator shows us a strong candle that significantly exceeds the maximum values ​​of the analyzed period, further confirming that the pair’s movement has come to its culmination.

Excessive optimism and greed of traders lead to culmination situations not only in the forex market, but also in other financial markets. All this ends as a rule with the same serious correction or reversal.

The US stock market (on the example of the S&P 500, on other indices a similar situation) was a very long time in an uptrend. The last major correction was in January 2016. Two years of growth in a clear up channel (blue channel). Pay attention, at point 1, the price once accelerated and went beyond the upper boundary of the channel, and this led to correction, though not significant, but correction. However, in December 2017, the index is aggressively accelerating and strongly exceeding the channel’s borders. A month of active growth and we see a very serious correction with a return to the previous channel. Even if we hold a short-term channel (pink), we see the same picture. Exit the channel up, retest the upper border of the channel and accelerate. Then a strong fall. If the S&P 500 can not keep within the boundaries of the pink channel, we can see a decline to the lower boundary of the long-term channel (blue), which can already lead to a reversal and the beginning of a long decline in the stock market.

The market can not fly up vertically, like a rocket. Fuel at some point comes to an end. The first traders start to take over profits. This was the situation with Bitcoin. The speculative instrument, heated to highs, could not stand the pulse.

And again the same situation. Exit from the growing channel at point 1, acceleration and sudden drop. In the case of Bitcoin, we see that the correction has broken the lower boundary of the uplink. The price still tried to continue the upward movement in the previous channel, but the way out of it finally formed a turn and we see a long and confident fall of the instrument.

Similar situations are found on any trading instrument of both the Forex market and other financial markets. As we see from the examples, the culmination with high probability is followed by either a deep correction or a reversal of the trend. Understanding the culmination is important for traders, because it helps to fix profit in a timely manner, avoid losses, and in case of a reversal – enter the new movement at the very beginning. When trading in a culmination, you have to be especially careful. To it the rule “do not catch a falling knife” is fully applicable, as the price movements can be very volatile and unpredictable.

(2 ratings, average: 5.00 из 5)
Leave comments. Ask questions. Subscribe to the newsletter on the main page of the FXTAA.com and you will be the first to learn about the release of new materials on our site.
Be prudent, observe risk management and trade in a plus.
SUBSCRIBE TO OUR NEW ARTICLES
(Visited 203 times, 1 visits today)